Sennheiser has a special place in the audio world. It is one of the few brands that delivers audio equipment to just about every kind of listener – from mainstream music lovers to bassheads to enterprise users to audiophiles. The HD 400 Pro is a pair of headphones that is likely to appeal to audiophiles and audio professionals alike. 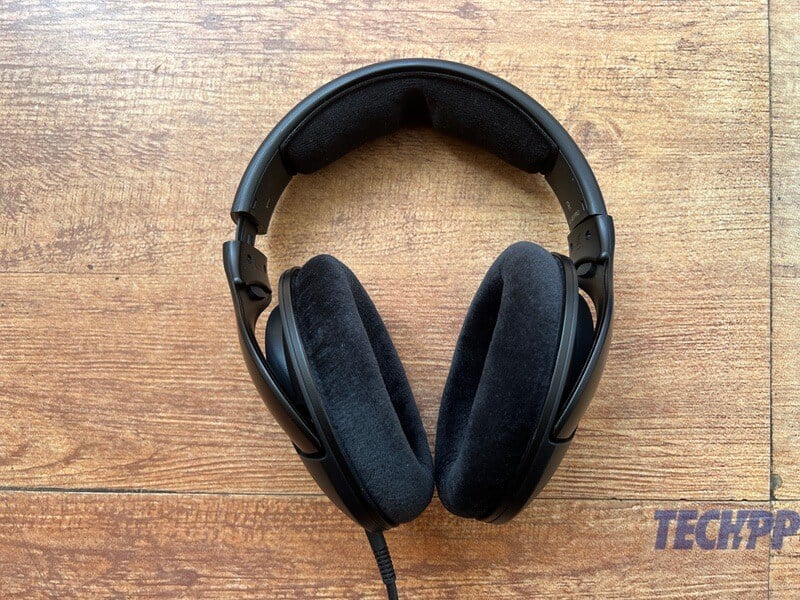 As Sennheiser itself said, it is actually a slightly repackaged version of the HD 560S. It has exactly the same audio signature but has been designed for studio environments and has an additional cable in the box. In fact, the headphones are being referred to as Sennheiser’s first open-back studio headphones.

Jet black and so comfortable

By and large, studio headphones tend to stand out from the crowd because of their size and design. Brands like Beyerdynamic, HiFiMan, AKG, and Audio Technica are not averse to throwing in elements of prominent branding, design quirks, and the odd touch of bling (shiny plastic and metal).

Sennheiser, on the other hand, tends to adopt a quieter approach. The HD 400 Pro follows the HD 600 series template in terms of color (being utterly jet black), even while sticking. These headphones are covered in solid, sober matte black plastic from the band to the cups. Even the velour padding on the cups and the inner part of the band are black, as is the mesh covering the outer portion of the cups (these are open-back headphones, so they are not completely covered from the outside). Unlike the HD 600 series, which has the Sennheiser logo in blue, or the silver-colored ones on the HD 500 series, these have the logo in black as well. Like the HD 500 series, the lower parts of the headbands curl around the earcups and seem to be attached to their sides rather than on the top, as in most headphones. 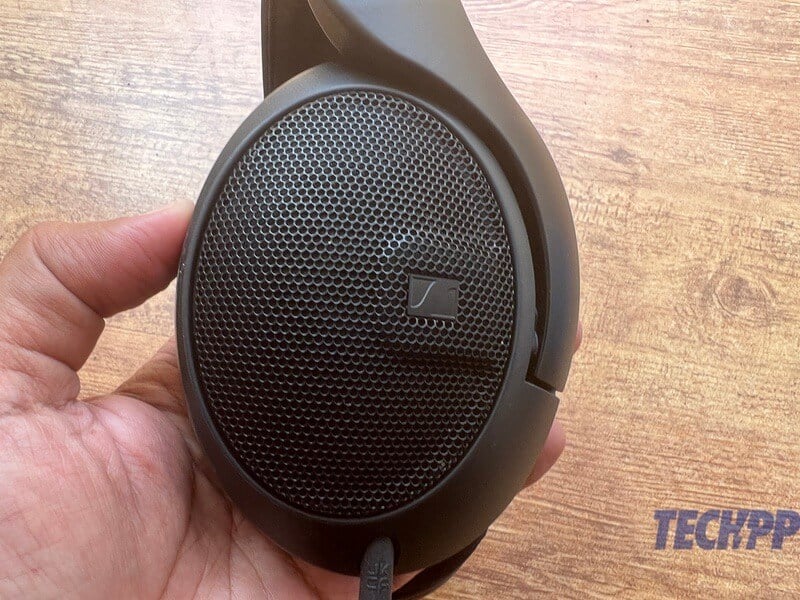 The Sennheiser HD 400 Pro are incredibly comfortable to wear, too, in the best Sennheiser tradition. They weigh 240 grams, and the band does not exert too much pressure on your head. The velour padding on the ear cups is very comfortable and does not get too warm. We have spent three to four hours using the headphones at a stretch and have never felt any strain on our heads or ears. The padding envelops your ears and provides a good amount of isolation, although these open-back headphones mean that what you are hearing will leak out.

You can get two cables and an adapter in the box, about which we will discuss later. What you do not get, however, is any sort of carrying case. We do wish audio brands would change this, especially in the case of open-back headphones, as their very open nature renders them susceptible to damage by dust. They are also not foldable at all, so they take up space in bags. That said, they have a very elegant, rounded design. They will not scream for attention, but those who see them won’t turn away in a hurry either, especially if they are audio fans.

Tailor-made for studio use 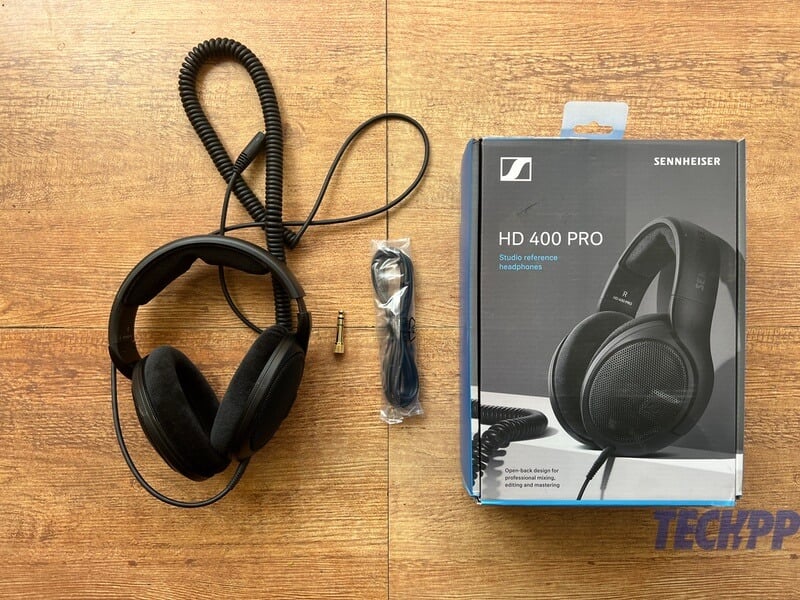 The HD 400 Pro come with two detachable cables, and actually, that is the biggest giveaway about their target audience. The 3-meter coiled cable is standard studio equipment, allowing you to stay plugged into the audio source even as you move around the room. If you find the coiled cable to be too much of a hassle – it can be if you are working in a relatively smaller place (and it adds to the weight of the headphones, too) – then you can also use the 1.8-meter straight cable that is also in the box. Both cables have a 3.5 mm jack plug at the end but also in the box is a 6.3 mm adapter, in case the audio source has a 6.3 mm jack.

In fact, the presence of these two cables is one of the key differences between the HD 400 Pro and the HD 560S – the latter comes with only a single 3-meter cable with a 6.3 mm plug and a 6.3 mm to 3.5 mm adapter. And that actually betrays the audiences the two very similar sounding headphones are aimed at – the HD 560s is more for audiophiles, whereas the HD 400 Pro are right at home in the studios. The 400 Pro are also discernibly lighter than the HD 560s, making them better suited for long, analytical hearing sessions. Like the HD 560s, the HD 400 Pro has a wide frequency response, from 6 Hz to 38,000 Hz, and an impedance of 120 ohms. 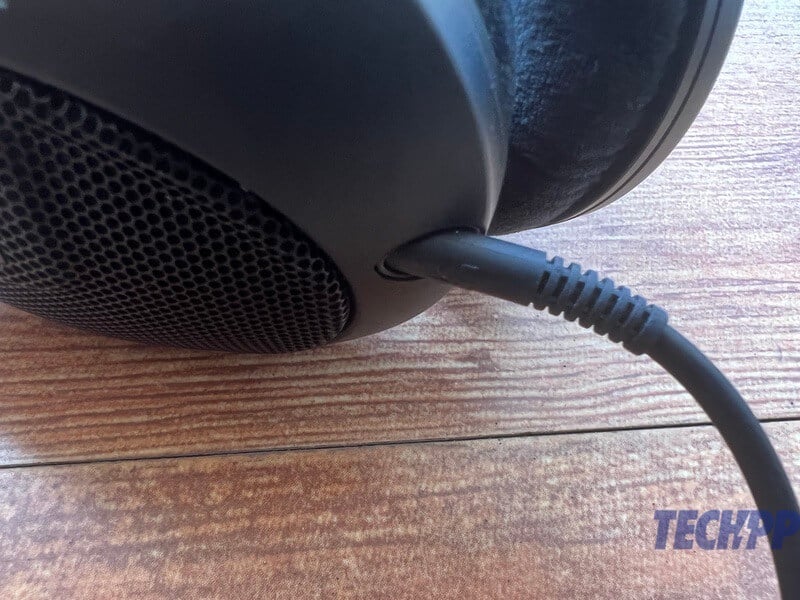 A point to remember is that you are going to need a DAC or amplifier to really get the most out of these unless you are using them with very powerful audio equipment. Plugging them into most smartphones will simply not give you enough clarity or volume. We used them with the Hidizs S9 Pro on our phones, and while they ran just fine off the MacBook Air, pairing them with the higher-end Earmen Tramp DAC totally added a different level of sound clarity. You do not need a high-end DAC for them, though – most mid-segment DACs should be able to do a more than ample job of giving you a more wholesome listening experience.

Most audiophile and professional headphones are known for their clarity, but even then, each brand has its own trademark sound signature. Sennheiser has generally tended to very gently stress bass and mids in their audiophile and studio headphones, ensuring that percussion and vocals sound wonderful. However, the HD 400 Pro (like the HD 560s) are among the rare Sennheiser headphones that actually manage even to stress treble a little. 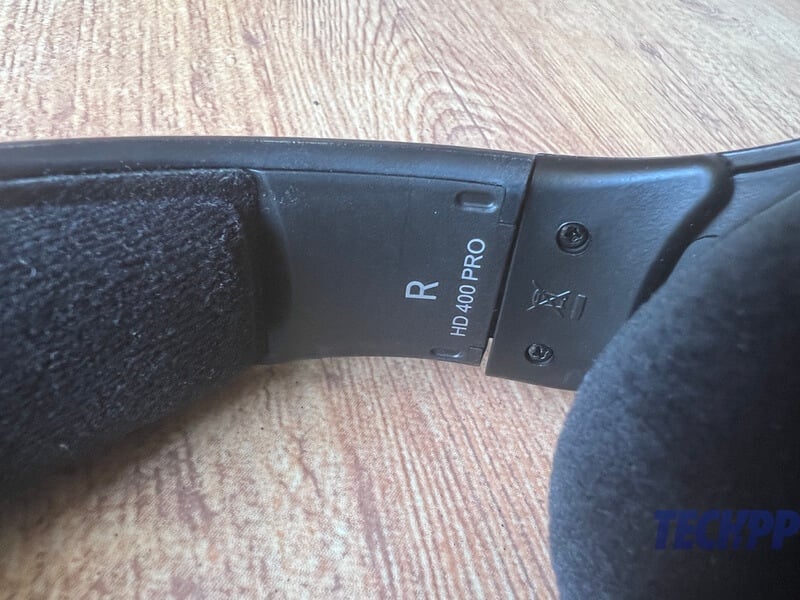 The result is audio that might seem a little sharp to those used to the generally warm tones of the HD 600 and 500 series (barring the 560s). However, this slight accent on treble also makes the HD 400 Pro inch-perfect for analytical listening, where you hear audio content for editing purposes. You will listen to each scrape and scratch, every excessively loud intake of breath. Sennheiser says this is because of angled transducers, which it claims cuts down distortion. Distortion will never appear on these headphones unless it is in the audio source itself.

We used the HD 400 Pro to edit a podcast episode we were involved in, and honestly, the level of detail we got was befuddling – we heard so much more than editing took twice as long. In terms of soundstage, these are not as “open sounding” as the AKG K712 Pro, but they are definitely more spacious than the HD 500 series and even the HD 600 and HD 650 – you actually feel you are in a reasonably large room and can hear the direction from which the sounds of different instruments are coming from.

Great for The Godfather, but not Top Gun 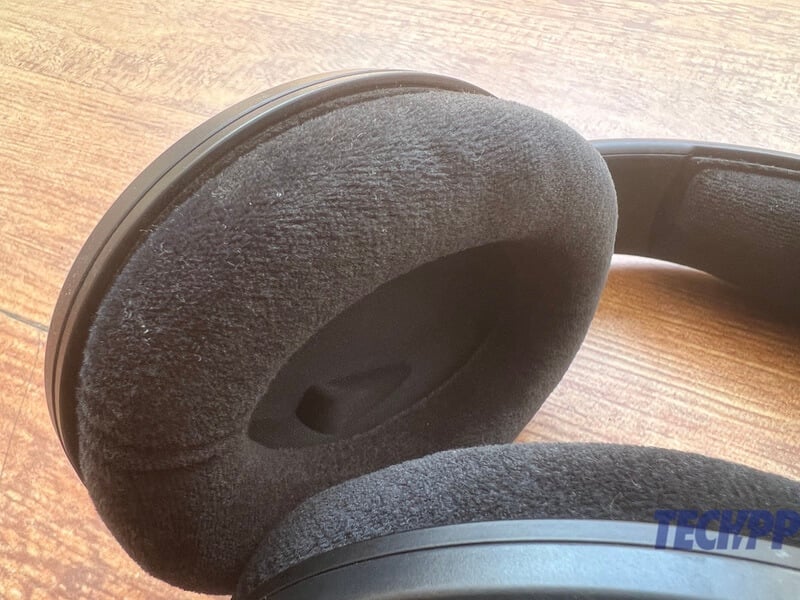 This wealth of detail and clarity also makes the HD 400 Pro very good audiophile headphones. The sound signature is on the flatter side, so those who love rock, folk, country, and jazz will enjoy using these. If you like your music with a bit of a thump, though, these are not your headphones as mainstream standards very restrain the bass. The headphones are also excellent for films and show that stress the dialogue and atmosphere – watching a horror film like IT was a terrifying experience as every creak of the door and every footstep came through clearly.

A series like Only Murders in the Building, with its understated music and natural sounds, was a treat to hear. Of course, podcasts are a pleasure to follow using these too. However, the lack of stress on bass makes them unsuitable for action-oriented content, be it in films, shows or gaming. In simple terms, the HD 400 Pro are great for watching The Godfather, but not for Top Gun!

Just remember that as these are open-back headphones, the sound will leak out of them. Private listening in public spaces is not an option for them. And no, do not even ask us if these have microphones – these are meant for listening! 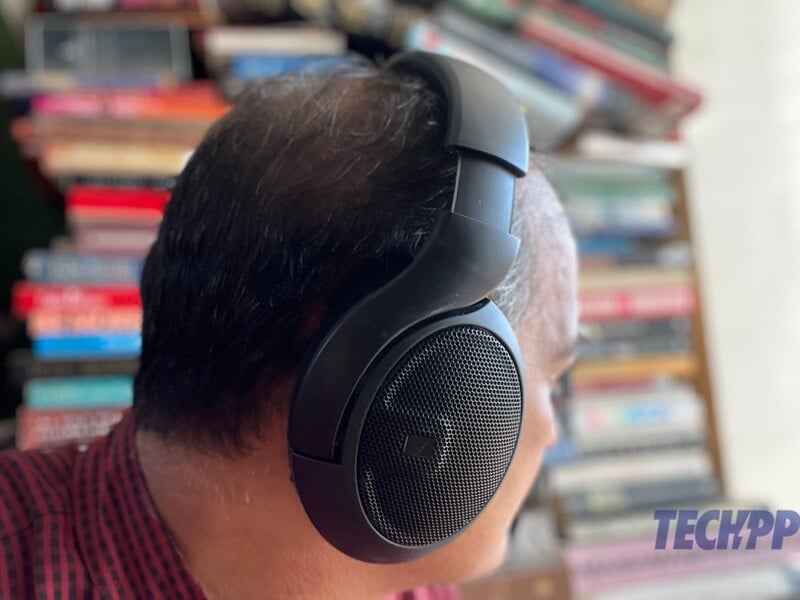 The Sennheiser HD 400 Pro were launched at Rs 21,990, but they are frequently available at lower prices, generally well below Rs 20,000, and in fact, at the time of writing, are available for around Rs 15,000/USD 249. And at that price, they are easily among the best headphones for professionals and audiophiles, rivaling the likes of the Beyerdynamic DT 990 Pro and the slightly more treble-heavy 880 Pro, the veteran ATH M50X, and the AKG K712 Pro. While some might prefer the somewhat more “roomy” sound on the 990 Pro and K712 Pro, a key point working in favor of the HD 400 Pro is the sheer comfort of using them for long periods of time.

They are relatively lightweight, are great to hear, and have an understated and yet classy design. We would say they are perfect for those who want to take their podcast and audio editing to another level or just want to appreciate sound clarity. Should you buy these or the HD 560s, which are available at a slightly lower price? It depends on how much you prefer the design of the HD 560s and whether you are willing to put up with their additional weight, and whether you need that extra cable in the box.