iOS 16 is live and available to all iPhone users starting with the iPhone 8. The latest version of Apple’s mobile operating system ships with plenty of new features and extends the functionality of some of its built-in apps.

Photos is one such app. It includes a bunch of useful features such as iCloud Shared Photo Library, Copy and Paste Edits, Undo and Redo Edits, and Duplicate Detection, which let you do more than ever before and eliminate the need to use third-party apps for trivial photo/video editing operations or hiding personal photos/videos on your iPhone.

If you’ve updated your iPhone to iOS 16 or are planning to do so, here’s what you can do with the Photos app in iOS 16.

Duplicate Detection is one of the most useful additions to the Photos app in iOS 16. It comes enabled by default and works by scanning your entire photo library to identify duplicates.

If it finds any duplicates in your library, it puts them into the Duplicates folder under Albums. Inside this folder, you’ll see all similar-looking photos on your iPhone organized into groups. Beside each of these groups sits a Merge button. If you wish to merge photos in a group, tap on Merge and click on Merge X Items again, where X is the number of duplicate files. 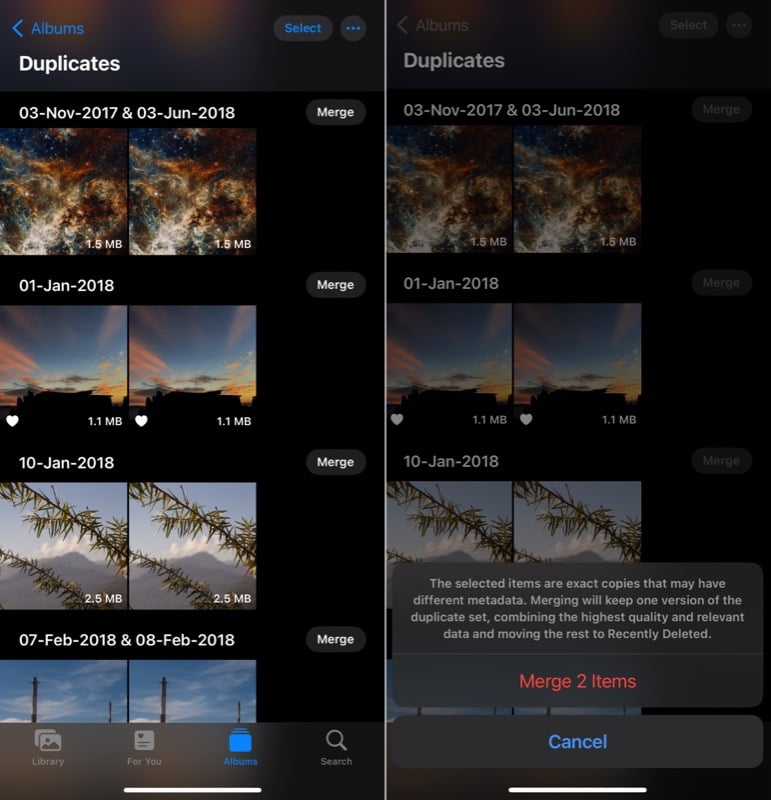 Photos will now merge all the duplicate images in the group into one single image and move the rest of them to the Recently Deleted folder.

The Hidden album in the Photos app lets you keep all your personal photos hidden from the photo library. However, even though this was a hidden album, there was no option to lock it, so the only way to keep it more private was to hide it from the Photos app.

Biometric locking is enabled by default in iOS 16. But if it isn’t or you’re unable to use it for some reason, you can turn it on using these steps:

Now, when you try to open the Hidden or Recently Deleted albums inside Photos, you’ll be required to authenticate using your biometrics. If you wish to protect your hidden photos further, you can hide the Hidden album by going into Settings > Photos and flipping off the switch for the Show Hidden Album option.

Copy and Paste Edits to Other Photos and Videos

Apple’s been offering new photo and video editing capabilities on the Photos app since the past few iOS releases. It also continues this trend with its latest operating system update. It brings one of the most useful editing options to Photos in a while: the ability to copy and paste edits between photos and videos.

With this new feature, if you’ve now got multiple similar-looking photos and you wish to apply the same edits across all of them, you can simply edit one of the photos and copy its edits to others; this also applies to videos.

Here’s how to do this:

Similar to the ability to copy-paste edits between photos and videos, Apple’s also offering another useful editing feature in Photos on iOS 16. It’s called Undo Edits and Redo Edits. Using this feature, you can undo and redo your edits to a photo/video while editing it with a simple tap without having to reset the values of different effects or edits you’ve performed manually.

One of the best Photos app features in iOS 16 is the option to lift subjects from backgrounds. It works with both images and videos and lets you extract subjects without requiring you to delve into the complex editing process it involves otherwise.

To use this feature, open the photo whose subject you want to extract. In the case of a video, pause the video when you get to the frame with the subject you wish to lift. After this, long press on the subject until it lights up, and you’ll see two options: Copy and Share. Select any based on your preference.

Alternatively, when the subject lights up, lift it from the background, and using your other finger open the app where you want to paste it / through which you want to share it and drop it there.

Use Live Text in Videos

Apple introduced the Live Text feature in iOS 15, which enables you to pull text from images inside the Photos app. Now, with the iOS 16 update, it’s extending the same functionality to videos too, so if you ever need to extract a piece of text or perform certain actions on it in a video, you can do so easily within the Photos app.

To use Live Text in a video, pause the video on the frame with the text you want to extract and tap on the Live Text button (with three horizontal lines) in the bottom-right of the screen.

When it’s finished identifying the text, you can select, copy, look up, translate, or share it. If the text contains a phone number, email, address, etc., it will turn into a link. You can then click this link to reveal relevant and supported actions. Alternatively, you can directly tap the text in the video to reveal the available actions.

In addition to extending Live Text to videos, Apple’s also increasing the overall actions available in Live Text on both photos and videos to let you do more with the extracted text. Flight tracking, currency conversion, translating words, and adding calendar events, are among some of the new actions you get in Live Text with iOS 16.

Apple introduced the People album in the Photos app as a way to help you collectively view all the photos of a person in your gallery. On iOS 16, it makes the feature more convenient by adding the ability to sort the order in which people appear inside the People album. Thus, making it easier than ever to find people and their photos on the iPhone.

To change the sort order inside the People album, open Photos and go to the People album. Click on the ellipsis button and select Name. It will now automatically sort the people’s list alphabetically.

At times, there will be scenarios where you accidentally capture a live image instead of a still. Until now, you could turn off the live aspect of the image by going into the edit mode and disabling the option from there.

However, with iOS 16, it’s much easier to disable the live aspect of an image. Simply open the photo on which you want to disable the Live option, tap on the Live menu button on the left of the screen, and select Off. 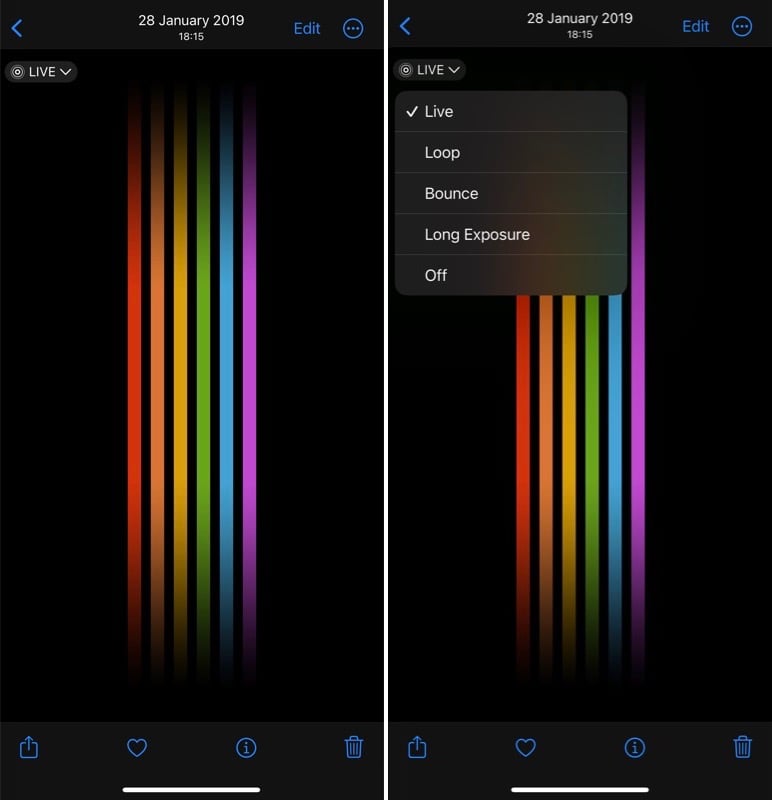 iCloud Shared Photo Library is a new photo-sharing feature set to arrive in a later iOS 16 update this year. When it goes live, it will allow you to create a shared photo library of all your photos and videos in iCloud and share their access with your friends and family, who can view, edit, or favorite images as if it’s their personal photo library.

Do More With the Photos App on Your iPhone iOS 16

Apple’s iOS update makes the Photos app much more functional and versatile than it’s ever been before. Be it something as trivial as locking the Hidden album or reusing the same edits on other photos/videos to complex operations like extracting subjects from backgrounds or detecting duplicates; the Photos app now lets you do all of it natively, so you can finally ditch third-party editing apps or other tools.

And the best part is these features will be available to all iOS 16-compatible devices, no matter whether it’s the latest iPhone 14 or almost half-a-decade-year-old iPhone 8.

Was this article helpful?
YesNo
TechPP is supported by our audience. We may earn affiliate commissions from buying links on this site.
Read Next
What is Apple’s Lockdown Mode? How and When to Use it?
#apple #features #ios 16 #photos