It is not easy to make headlines once you part ways with a brand as buzzing as OnePlus. Once you are out of sight in the tech biz, you are often out of mind. Carl Pei, however, has been bucking this trend. Soon after he left OnePlus, Pei decided he was not going to stay benched while other brands played smartphone battles right in front of him. 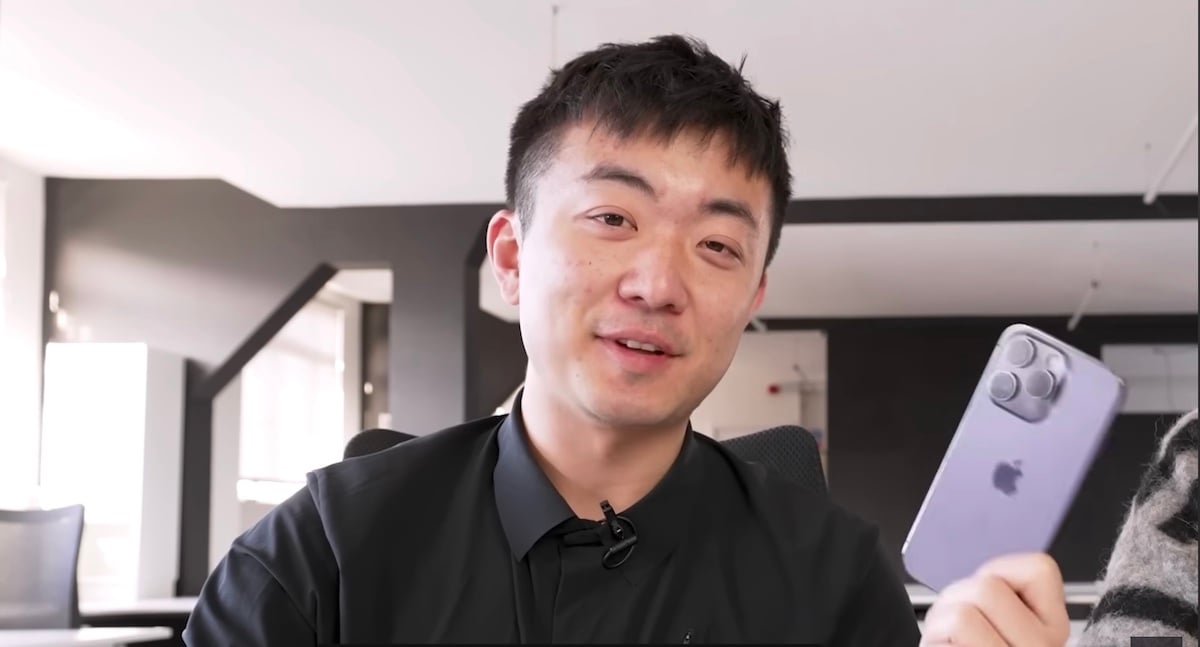 Making Nothing “the celebrity baby everyone wants to know more about”

He came back with a very ‘go hard or go home’ attitude with his next venture, and it paid dividends, making it like a celebrity baby that everyone wanted to know more about. From naming the company something as ordinary yet unconventional as ‘Nothing’ to teasing the world with glimpses of the products that the brand was going to launch to taking potshots at the existing state of technology, Carl Pei was selling the brand and its products even before they had arrived in the market. Thanks to this marketing wizardry, tech town was drowning in all things Nothing well before its products were launched. The marketing moves continued, and the hype helped Nothing products (the Ear 1, the Phone 1, and the Ear Stick) when they finally came into the tech ring.

Yes, the Nothing products were quite different and attention-grabbing by themselves, too – the semi-transparent design of the Ear 1, the LED back panel of the Phone 1, and the rotating lipstick-like case of the Ear Sticks have definitely been among the tech design highlights of recent times. Still, Pei made sure they never lacked banner space, either.

It has been some time since Nothing launched the Phone (1). It was formally launched in July 2022. The reviews are out; the numbers are out. Usually, for most brands, this is where the marketing campaign usually fades. But not for Nothing. Pei has found ways to keep the Nothing Phone (1) in the news, and his latest effort came in the shape of a review. Not of one of his own devices (because that obviously would not make any sense) but of a competing brand. Well, to call it ‘competing’ might not be completely fair because the phone he reviewed was priced more than twice as much as the Nothing Phone (1).

The CEO of Nothing took to YoTube and posted his review of Apple’s iPhone 14 Pro. Now we know how this looks – the CEO of a rival smartphone brand reviewing a competitor’s phone would obviously not go down very well with many people, most of whom would expect him to run down the product. But Pei surprised the world with quite a positive review of the iPhone 14 Pro. Yes, you read that right: it was a very positive review.

Give the competition a positive review…but remember to mention yourself

And it did not look like a quickly put-together marketing move. Pei was not hasty with the review. He claims he took a week, used the iPhone thoroughly, and then gave his review. He used it as his secondary phone and clearly mentioned that he has been an Apple fan; again a bold move. He talked about how the design is underwhelming and the dynamic notch is a bit overhyped (we agree, wait for our long-term review). He also mentioned that the iPhone 14 Pro has the best cameras in the smartphone market at the moment and that everything on the phone works very smoothly. It was not all positive, though – he said that he did not like iOS 16 as much and liked the plain old looks of the iOS before it went ahead with the ‘flat’ design but, in the end, conceded that the iPhone 14 Pro is the best high-end phone one can buy in the market at the moment. 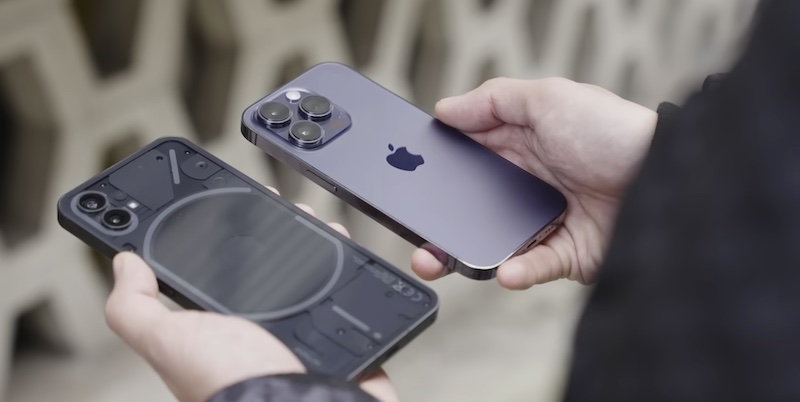 It sounds like a positive, straightforward review, right? Well, that is exactly what it was not. While the main idea was the review of the iPhone, Pei channeled his inner Steve Jobs and turned this simple, seemingly sincere review into a marketing master class. Remember when Steve Jobs called Bill Gates and thanked him for investing in Apple at the MacWorld conference in 1997? A lot of people felt he did not need to do it publicly or highlight it, given that Gates was a rival. Jobs, however, used the call to get a vital message across – Microsoft would support Apple, which was at that time in the weeds and almost set for a spot in the tech graveyard. He leveraged Microsoft’s equity for his own brand, which needed it at that time!

Pei has always admired Jobs, who was considered a marketing genius of his time and beyond. So it is not surprising that he is walking down a similar path, and the review of the iPhone 14 Pro was another step in the same direction. While Pei might have reviewed and appreciated the iPhone 14 Pro in the video, he also very cleverly put the Nothing Phone 1 and the brand Nothing on a slightly higher pedestal as compared to Apple.

In the almost ten-minute-long video, nearly every time Pei appreciated the iPhone, he added something the Phone (1) brought to the table. For instance, when he talked about how the design of the Phone (1) was very unique as opposed to the regular (read “repeated”) design of the iPhone. He then proceeded to compare the profit margins of the two brands and highlighted how Apple’s margins were a whopping 50 percent while Nothing was making quite literally nothing with the Phone (1), highlighting a seemingly virtuous stand of the brand.

When talking about the OS, Pei stated that he was not very fond of the new iOS and liked the old-school looks of the interface before iOS 7. Incidentally, this was very much in line with the kind of interface the Phone (1) brings to the table – minimalistic and old school. 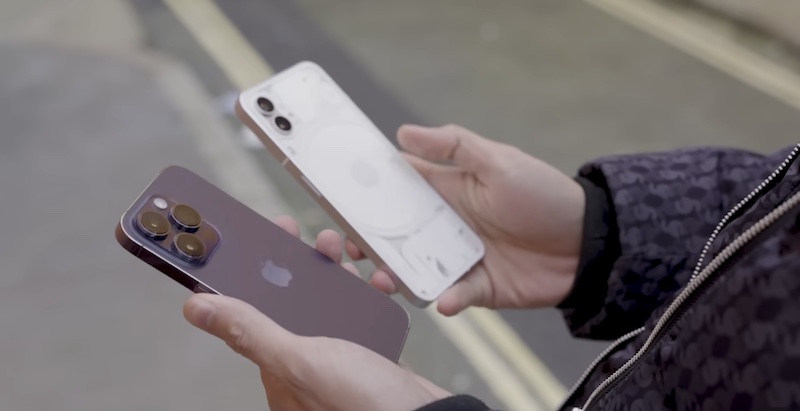 Although Pei agreed that the iPhone 14 Pro had a very powerful processor, he did not talk about the phone’s performance and shrugged off the performance part by mentioning how most smartphones get the regular jobs done without glitching. He mentioned he plays casual games like the League of Legends on his phone, which works perfectly well on the Nothing Phone (1) as well, even though it has a relatively less powerful processor in comparison. Pei did not talk about the display of the iPhone 14 Pro and the real processing power of the phone or did not compare the battery life of the two phones, even though the battery and fast charging is an area where the iPhones usually face a lot of criticism. This is because Pei knew these were the areas where the Phone (1) would have a tough time going up against the iPhone.

Staying in the news, laying a foundation for the future

His best card in the game was pricing. Pei emphasized how the iPhone 14 Pro, although powerful, was very expensive and not worthy of an upgrade because it lacked significant upgrades over its predecessor. On the other hand, he established the Phone 1 as a stand-out, ambitious phone. He highlighted the brand as a “small team” or an underdog trying to take on big names like Apple, a company that is making a lot of profit from every single iPhone it sells, trying to make the audience root for the small yet brave company.

Apart from reviewing the iPhone 14 Pro and cleverly slipping the Nothing Phone 1 in comparison there, Pei also created a level of trust and confidence with the viewers. By praising a rival brand, he also made himself look like a very honest and upfront person, which comes across as a breath of fresh air in the world of suited-up, jargon-oozing CEOs. We do not think this will change the course of the iPhone 14 Pro’s destiny or persuade those looking for a high-end, premium smartphone to pick the Nothing Phone (1), but Pei’s review has subtly placed the Phone (1) next to the iPhone Pro, which is not a bad place to be. It also certainly builds a very strong foundation for a flagship phone if and when Nothing comes out with one.

Was this article helpful?
YesNo
TechPP is supported by our audience. We may earn affiliate commissions from buying links on this site.
Read Next
NothingOS Made Me Realise How Much Overrated Pixel UI Is
#Carl Pei #iPhone 14 Pro #nothing #Nothing Phone (1) #Opinion #Steve Jobs