The title sounds like Music in your ears if you are a gamer, doesn’t it? There are no hidden catches behind what I am going to tell you today, so sit back and go through the article and share the good news with fellow gamers by bookmarking the post on Digg, Stumble etc. 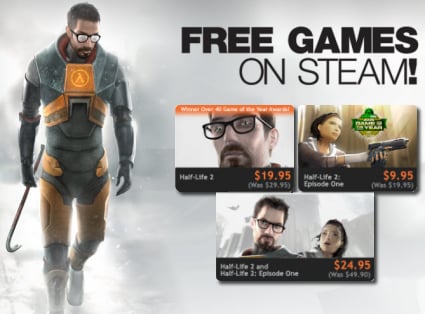 Steam is a digital distribution, digital rights management, multi-player and communications platform developed by Valve Corporation, and has been widely used to distribute a wide range of games and related media entirely over the internet. The network gained more widespread use after the release of Half-Life 2 in 2004, which was intrinsically integrated into the system. Steam has since expanded as other major publishers, including Eidos Interactive, Activision, Ubisoft and Electronic Arts began distributing a number of their titles over the system. A substantial number of independent titles have also been released, along with several modifications for Valve’s own games. Nearly 1000 games is now available for purchase, download and play on Steam.

Not all the games available on Steam are Free. Steam platform is basically meant for sales and selling, but still some games are available for free download which you can play anytime. These free games is not just an demo, but full version games with no limitation or restriction. The free full version games on Steam does not require a serial number, license key or product registration information to activate or unlock.

Free Games for All Steam Users

Of course, there are also tons of free games demo on Steam.

Was this article helpful?
YesNo
TechPP is supported by our audience. We may earn affiliate commissions from buying links on this site.
Read Next
10 Hidden Free Games on Google: Solitaire, Tic-Tac-Toe, and More
#free games