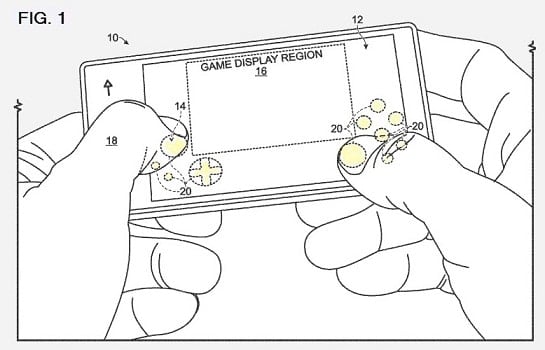 The talk about portable devices is only starting as it seems it will become the norm in a few years. Especially, since relevant studies show that tablets will outsell laptops. And we already know how popular and versatile smartphones have become. Since we’re taking technology everywhere we go, we start having the feeling that it should do for us exactly what we want. That’s why bold gaming projects appear. To transform technology according to our needs.

That’s how we started to believe a gaming console like Oyua can bring open source Android gaming to our TV and that’s how we believe in another product like GameDock for iOS. We believe that’s possible because we can see them in action, albeit they should be perceived as prototypes. But what happens when we see yet another bold patent? The distance between filing for a patent and seeing it inside a final product is huge, but somehow, this one makes sense, from the gaming point of view.

Why it makes sense

The patent discovered by PatentBolt shows that Microsoft might be interested in developing virtual controllers for tablets and smartphones. A while ago, it didn’t quite make sense why would Microsoft need such a piece of technology, but with the announcement of their Surface tablet, suddenly, things take a new perspective. We don’t know for sure if Windows Phone will survive in its battle against Android and iOS, but if Surface becomes a real product, then it will lure in lots of buyers.

Rumours about Xbox gaming coming to Windows 8 device have been circulating for almost an year. Xbox-like virtual controllers on a possible Surface tablet will be another major reason to buy it. Virtual controllers for smartphones and tablets seem like a good idea from the usability aspect, too. It won’t ruin the design of your smartphone/tablet and people won’t even suspect you’ve got something like that inside your gizmo.

PatentBolt explains how it would work:

A smartphone or tablet with such a functionality shouldn’t be viewed as a rival to PlayStation or Nintendo, it’s just not powerful enough to compete with them. But with will be a luring factor, nonetheless. As we’ve mentioned it so many times, casual gaming is becoming more popular and it won’t kill gaming consoles, but it will surely get many adopters. And if Microsoft wants to stay ahead the superhero Apple, then they better launch the Surface tablet with a killer feature like this one!

Was this article helpful?
YesNo
TechPP is supported by our audience. We may earn affiliate commissions from buying links on this site.
Read Next
With Football Manager 2023 Touch, Apple Arcade finally has its “killer ...
#gaming #microsoft #smartphones #tablets