We don’t usually cover too many stories about BlackBerry at TechnologyPersonalized, but this one is too good to let go. Even if RIM’s image isn’t glowing as it used to, BlackBerryMessenger still remains one of the most innovative ways of modern communication. It’s one of the most secure and safe communication methods, actually, even used by rioters in London protests, for example. Who knows, maybe RIM’s Messenger software was actually the reason for Apple to develop iMessage.

Amidst the non-stop growth of the Android ecosystem and the eternal “premium” feel of iOS devices, RIM hopes to manage to bring back customers that are flocking away. With the launch of the 7 version of BlackBerry Messenger, the Canadian company has added a very appealing feature – free Wi-Fi voice calls with other BlackBerry users. 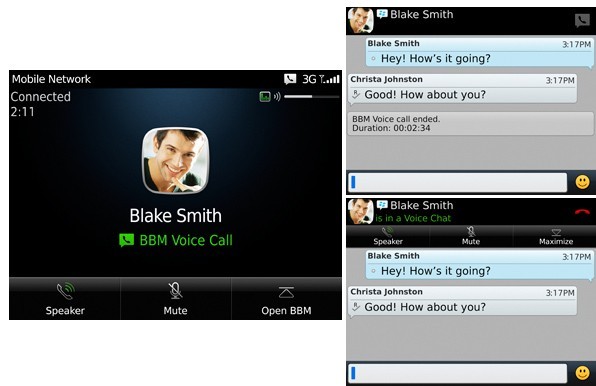 
Free Wi-Fi calls should be perceived as an add-on feature for the Messenger application and it acts as one. Imagine that you’re communicating by text messages with your friends or acquaintances and you want to call them, for free. The visual indicator will let you know if they are available for a voice call, completely for free. Carriers won’t like that, huh? The very moment when I heard about this I thought about the biggest drawback – you depend on a Wi-Fi connection to be able to perform the call.

And, at first, you’d think that not too many will be convinced by this feature, since you won’t be able to call your grandmother who’s 1000 km away, right, and probably doesn’t have a Wi-Fi connection? Or your friend who’s skiing in Austria. But once more, RIM’s playing smart and is making a bet on the corporate sector.

Chances are that this special feature is designed with the entreprise field in mind. Imagine working in 3 story building: you have to run here and there with papers and things that need to be clarified. What if you could call your colleagues or boss completely for free and, quite secure, on top of that? This is just another great reason for companies to buy only BlackBerry units for their employees (why not walkie-talkies, one could ask…).

Another interesting thing is that BBM Voice also has a split screen mode which allows to talk and text at the same time – neat function for multitasking freaks. You can also check some emails, for example. It happened to me many times – I was talking with somebody and wanted to read him something from an email he sent me. This function will help with that and you’ll also be able to write an email while you talk – cool! RIM officials proudly talked about this on their blog:

I can’t tell you how many times I’ve been on chatting with someone on BlackBerry Messenger (BBM), trying to explain something, and realize it’d be a lot easier to just pick up the phone and talk it out. Thankfully, BBM 7 has me covered with BBM Voice. It’s available now in BlackBerry App World for devices running BlackBerry 6 OS and higher with support planned for smartphones running the BlackBerry 5 OS early next year.

How to enable the Voice feature

Was this article helpful?
YesNo
TechPP is supported by our audience. We may earn affiliate commissions from buying links on this site.
Read Next
Blackberry Key2 LE with Snapdragon 636 SoC and Physical Keyboard Launched for...
#Blackberry