Whatever the iPhone lacks, it is certainly not camera apps. From Instagram to Pixlr-o-matic to various Adobe packages, the iPhone user has more than a crowd of apps to pick from. And many of them are free to boot. Good enough reason to make you wonder why on earth we are raving about a paid app (even if it is just a measly 99 cents) for image taking and sharing?

Well, mainly for reasons of interface. Analog Camera comes from Realmac Software, the folks who gave us the incredibly elegant to-do list app, Clear. And as in the case of Clear, Analog Camera wins our hearts as much for what it does as for the way in which it does it. It is a small enough download – 5.3 MB and as we said, comes with a price that is as close to a Dollar as can be. 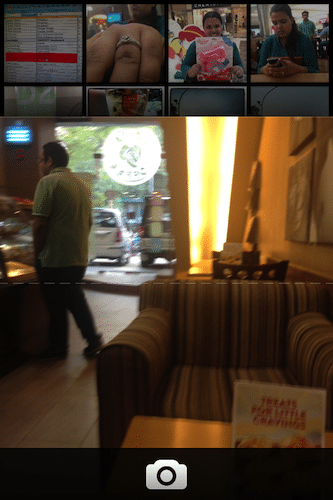 Launching the app will straight away take you to the live camera view. Well, for the most part of the display anyway. Perched right on top will be two rows of the most recent pictures you have taken. You want to access all the images on your device – just swipe downwards from the pictures and you will find yourself in the gallery. To go back, just pull the bottom panel upwards or if you would rather be conventional, tap on the camera icon on the bottom. And yes, you can also just pull down the top slightly to see the images and release it to get back to camera mode.

Staying with the camera app, you can tap once on the screen to focus, double tap to show focus and exposure areas (and move each around if you wish), and then single tap to merge them into one. Snap your picture, and you will see it appear on the part of the gallery visible to you above the camera screen. If you are pleased enough, select it, and you will see it placed in the middle with eight filter-ed versions around it. In essence, you have the original shot in the middle, and its version in eight filter effects all around it, letting you all of them in one screen. Tap on any one of them and you see a larger version move to the forefront of the display with a light whooshing noise. Convenient. And if you want to get right back to the camera, just pull the screen down! 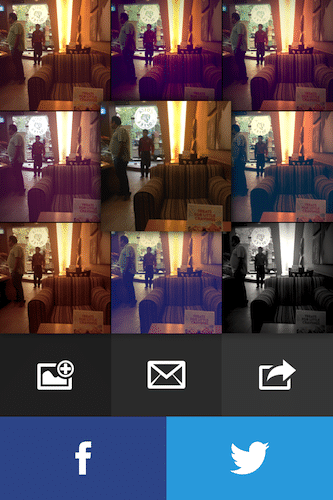 As if displaying the original and eight of its edited avatars on one display were not enough, the app also adds large buttons below for saving to gallery, mailing, sharing on social networks and a button apiece for Facebook and Twitter. You just select the version you like and go right ahead and share it in the way you like best. From a single screen, without exiting the app. Pretty neat, we think. You can also edit images that already exist in your gallery – although this involves cropping them to the resolution supported by the app (a square 1024 x 1022).

Right, and that’s all there is to the app. No, you cannot crop images selectively or mess around with brightness or saturation. You just have the camera, you pictures, the eight effects and the sharing options. The charm is that these are all incredibly easy to reach and use – just a swipe or tap away. The filters are of decent quality and although some might bemoan the absence of frames, we are not complaining too much really. 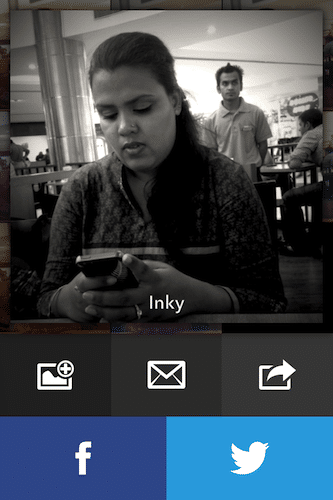 Just like Clear, what makes Analog Camera work is its sheer simplicity – there is not much to do, and what is there, is easy to reach, and most importantly, you get a good result. Some might say that they can do more even with the relatively basic Instagram, but then this is an app that attempts to simplify matters, not complicate them. Analog Camera sets out to show you that at the end of the day, photography can be a simple task. And it largely succeeds (we did experience a few hiccups on the iPhone 4S in terms of speed, though). We would have also liked to have the full screen to the camera on some occasions and a way to access the front-facing camera. 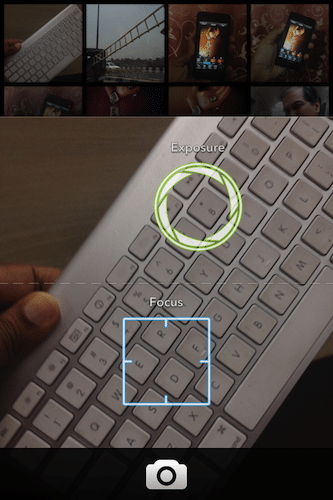 But even with those quibbles, it is hard not to like Analog Camera. To paraphrase a line used to describe another brand’s products, it just works. In an unfussy, uncluttered and elegant manner.

99 cents to discover how simple photography on an iPhone can be? We would recommend investing.