For some, sleeping is a problem instead of a remedy. Either from too much work, too much stress, or other dysfunctional reasons, people can have a hard time getting asleep, and even though they slept for enough time, they wake up tired. Smartphones and other intelligent devices can also help owners in this matter by using some smart applications and software solutions. Besides customizable alarms and apps that track sleeping habits, the following list can be accounted as a first-aid solution in sleep disorders.

Besides software trickery, choosing a good pair of sleeping headphones can also help. Guaranteed to isolate your mind from the surrounding noise without causing discomfort, they are an easy solution for concentrating and helping people relax. When that doesn’t help, we recommend visiting the doctor or, if it works out for you, exercising more.

Have a better sleep with these apps

Whether you’re an Android, iOS or Windows Phone user, there are various mobile applications that can help you sleep. Besides these, a range of desktop tools can also come in handy, but their range and purpose is somewhat limited. In the following lines, we’re going to present the most interesting tools. 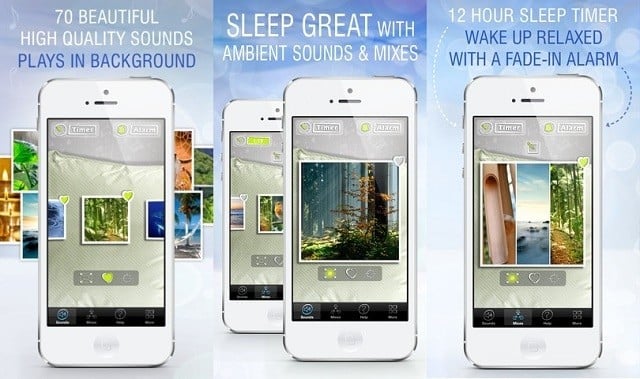 The first good step would be to use a mobile application that plays nice, calm sounds right before you get to bed. One of these options is Sleep Pillow, an iOS title that can be downloaded for free but also has a paid version with extended features. The basic package offers nine soothing sounds which render waves, birds, frogs, whale songs (no rain, unfortunately), and other type of gentle animals, all in the hopes of relaxing the listener. All songs are shown as pictures, and the tune starts playing when the user taps a selection.

Mixing sounds is also allowed through the use of a Mixes tab, from which the user can combine various songs into one. Tuning the volume may also help in that task. Sleep Pillow also offers a shortlist for favorite sounds, a sleep timer that lets you choose how long the songs should play, and even more.

The paid version goes for around $2 and offers around 70 different songs, an alarm clock, and the possibility of timing songs for up to 12 hours. 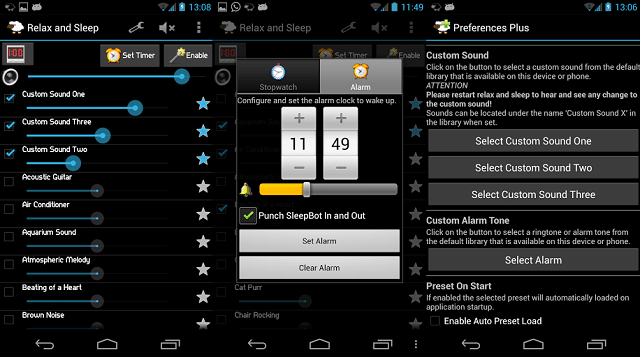 On the other side of the camp, Android users should check Relax and Sleep, a free application that is pretty much similar to its iOS companion above. Using over 50 unique sounds ranging from ocean waves, birds, summer rain, and other nation-inspired choices, this application can calm the user and get it sleeping in no time. For those who choose the city instead of nature, the package also contains some unorthodox songs as well, which include vacuum cleaners, refrigerator fans and air conditioning. As strange as it sounds, the last one really works for me.

Relax and sleep allows owners to tweak the volume of each tune played and also choose to render up to five sounds simultaneously. The application also comes with a timer, an alarm clock, and the ability to shake the phone for a random melody. Moreover, users have the possibility of starting certain songs, which will move up the list. Mixing is also supported.

The paid version comes with custom alarms and additional presets and will set users back $2. 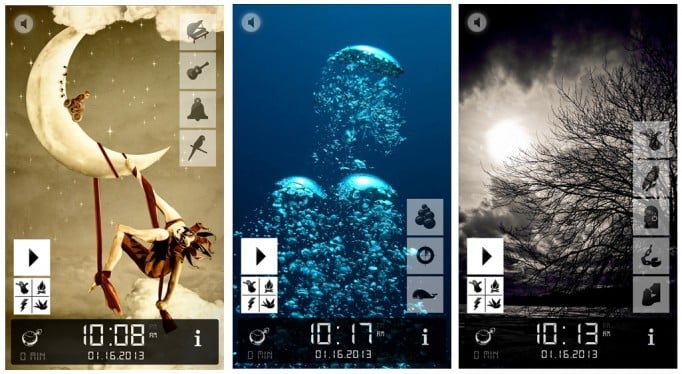 Microsoft users should not feel left out of the deal this time, with Sleep Bug being a nice option for both services presented above. Pretty much like its companions, this Windows Phone application can render sounds of gentle creatures or beautiful nature events. The twist comes in the method chosen.

Unlike any other application out there, Sleep Bug has chosen to display a relaxing scene alongside the music. To be more precise, this service offers ten free scenes that contain beach, garden, river, and jungle scenarios. Each scene comes with a nice background, a bass melody, and three to five additional sounds that can be mixed and customized by the user. Usually, these additional sounds mimic the noise of animals or elements familiar to the selected scenario.

Sleep Bug also has a timer feature and for $2, users get 12 additional scenes which do include more modern scenarios.

A discrete alarm at its origins, Sleep as Android is actually a complete package of sleeping-aid tools which ensures a fast get-to sleep time and a stress-free wake-up. In a few words, the application can play a small range of nature sounds and other lullabies, helping the user get to sleep. Afterward, the software can analyze and track sleep cycles and display a nice report when you wake up, in the form of a sleep graph.

The application also includes anti-snoring tricks, sleep talk recording, playlists of relaxing songs that have nature-inspired tunes, go-to-bed notifications so you won’t stay up late, and a deficit track. When it comes to waking up, Sleep as Android uses the graph and a time range pre-defined by the user to wake you up at the most opportune moment. This decision is taken by analyzing the body’s movement at that time through the smartphone’s sensors.

Sleep as Android is free to download but the complete version will set you back two bucks. 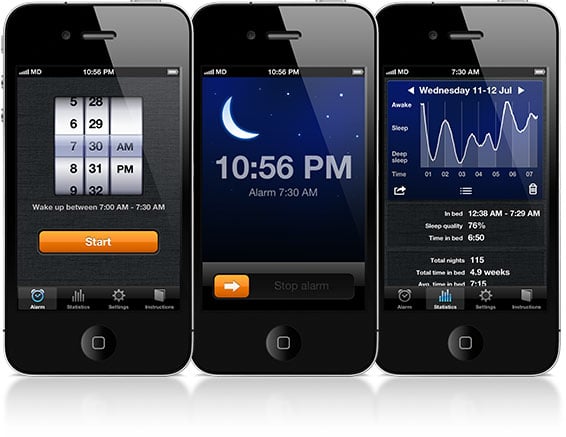 Apple’s alternative of the application described above is Sleep Cycle, a paid-only package that costs $0.99. The software analyzes your sleep patterns to improve sleep quality and the body’s health. A detailed graph accompanied by statistics will be provided at the end of the sleeping cycle.

Besides analytics, Sleep Cycle can also analyze how certain events affect your sleep quality. For instance, if the owner eats too much or drinks a cup of coffee late afternoon, the application will provide details on how those events have influenced sleeping. Of course, these events are manually inserted.

Waking up is done through an intelligent alarm, which wakes the user with the help of the sleep graph at a given time range. In other words, the user is prompted to enter the maximum wake-up time, and the software will automatically calculate when the alarm will sound to synchronize with the lightest phase of sleep. Even though this might produce shorter sleeps, developers guarantee an energizing morning.

Last but not least, the alarm uses several calm tunes to wake the user up and a note-taking feature to write down the most interesting discoveries of that day.

Although the main purpose of this application is a bit out of scope today, JetLag Genie helps users create a plan to ward off the haze of jet lag. Available for iOS only, the application prepares your sleep schedule and makes a complete sleeping strategy that includes pre-departure naps, sleeping during the flight, and what to do when you reach the destination. All of these after introducing the flight information and a personal sleep pattern – when you usually sleep, for how long, and other things like that.

Besides planning, JetLag Genie comes with a melatonin guide, which vouches to keep your heart safe during the procedure. The app costs around $3.

I’ve never been a fan of hypnosis myself, but those who believe in this art have to try Relax Completely, by Darren Marks. This useful application vouches to hypnotize everyone who uses it and get them to sleep in no time. The software comes with a simple design and a wide range of video scenery, where the user is offered a hypnosis session by the UK’s leading hypnotherapists and trainers.

And the best part is the price: free. 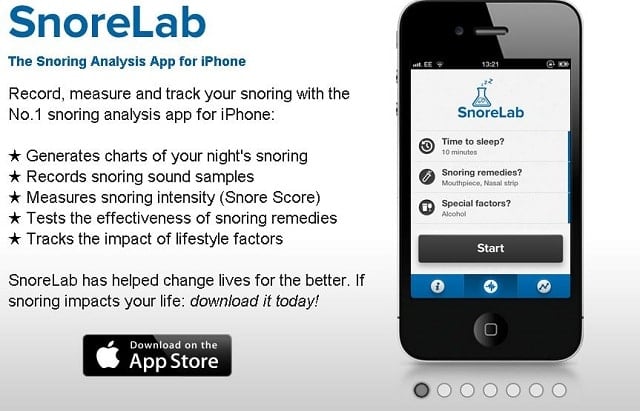 Snoring, that terrible problem that most middle-aged guys have, can be resolved in the modern age. While a smartphone application won’t extinguish the cause, SnoreLab comes in aid with a sound-analyzing algorithm that helps users track the progress and impact of various events and remedies.

For instance, let’s say you just purchased a snoring guide from the pharmacy and you want to see if it’s working. Simply install this application and leave the phone nearby when sleeping and if a certain noise threshold is passed, the software will record and let you know the next day.

Last but not least, we’re introducing yet another sound analyzing the application, but this time, for Android companions. Known as SleepBot, this application is a fully-featured sleep-tracking software that uses the phone’s built-in accelerometer to track habits. Place the device near your body, and through the night, the application will record any movements and present a thorough analysis.

Beyond that, the application also records sounds if the noise level is strong enough; this allows the user actually to hear what he was talking about last night. The recording threshold can be manually set in the settings menu so powerful background noises would not interfere. Also perfect for catching ghosts.

SleepBot is free to install and comes with a smart alarm system for a smooth wake-up experience.

The Best AI Writing Tools to Help You Write Better Content…
PhoneTrans: a one-stop data transfer solution to help you…
Apple’s Find My App Will Now Help You Find Your Third-Party…
Apple's New AirTag will help you track your valuables
10 Essential Offline Apps (Android and iOS) for When You…
Digital Wellbeing Experiments announced to help Android…