Waking up is sometimes the most difficult task of the day and doing so on in a dreadful, rhythm-less way can be even more painful. While all mobile operating systems come with a standard alarm application, this is often too less for those with specific taste and needs. And when needs have to be satisfied, customization is required.

In the Android and iOS world of alarms, diversification can be found at each corner. We’ve browsed both markets and found that around 10 names have enough to be deemed worthy. So, today, we are about to talk about the best alarm applications of the moment.

The Best Alarm Clocks in the Wild 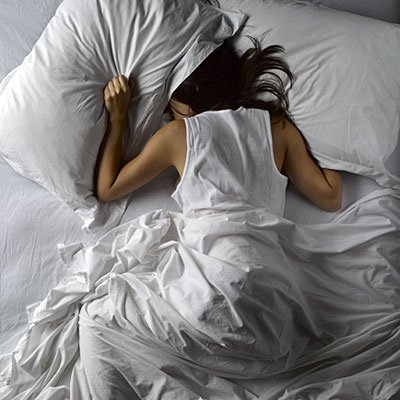 Waking up can be pretty tough. Those that have troubles sleeping usually fool themselves by turning alarms off and getting back in the bad. On the other side, those that get up in time may not do so on a pleasant tune and this may wreck the mood of the entire day. For both sleepwalkers and power-workers, we have the best Android and iOS apps to keep you covered:

We start our collection with a wonderful Android application, which aims to preserve the body’s natural state and disturb the user less. In a few words, Sleep as Android takes care of your sleeping cycles and wakes up the user at the optimum time. The process is fairly easy and requires having the smartphone nearby. All you have to do is set an alarm and a preferential time range, in which the application should wake you up, and then get busy sleeping. When entering the pre-defined time stage, our smart buddy right here will track different factors (such as noise, body movement and vibrations) to decide if you are in a deep, or light stage of sleep.

Sleep as Android will only wake users up when it’s more convenient and healthy. Thanks to that smart algorithm integrated, users should not feel stressed when waked. Moreover, the app uses a wide range of nature songs and silent melodies to achieve its purpose, while allowing owners to integrate their own tunes.

This app’s functionality goes beyond normal boundaries, allowing people to record their sleep talk, play lullabies before bed and even be announced when they should quit the internet, and adopt a pillow. At the end of the sleep, users will receive a graphical representation of their activity and a lot of data which can help users understand processes hidden behind, while uncovering certain deficits.

The app is free to download but the fully-fledged version will set you back two bucks. 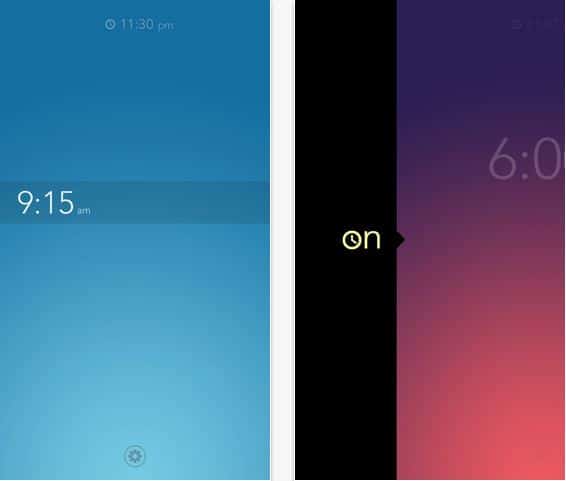 When it comes to Apple’s iOS, many users chose to stick with the stock version. Those not satisfied with the standard model can always opt for Rise, a stylish minimalistic application praised by many sources. At its very essence, Rise Alarm Clock offers only the necessary and this is what we loved about the application.

Relying only on touch gestures, Rise allows users to set up alarms by just dragging down the screen or to snooze with a shake. Every possible gesture is implemented very nice and once owners take the first tour, the feeling becomes natural and easy to remember. We all know it’s hard to successfully hit buttons at six in the morning.

Feature wise, this iOS-exclusive application (it works for the iPad also) allows users to choose a personal song from the iTunes library as an alarm, or gives a short range of pre-defined melodies. Waking up can be configured to be as gentle as possible for the owner, by gradually increasing the volume as the melody develops.

Available for $1.99, Rise Alarm Clock can wake people up even when the device is locked.

Sleep If U Can 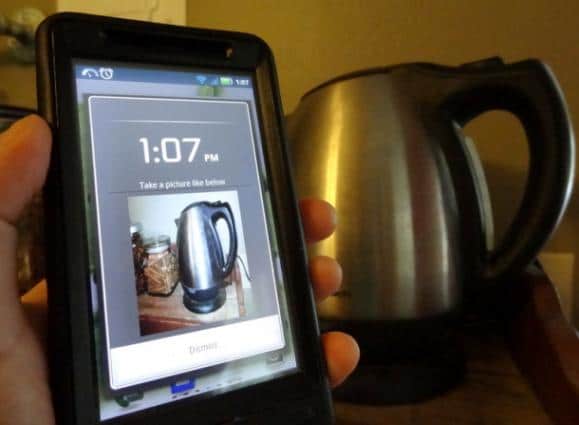 We will call this the last resort option for heavy sleepers, as it is a very annoying alarm system. Sleep If U Can, a properly chosen name if you ask me, demands users to take pictures of various house-hold items before shutting the alarm down. Once the application has been installed, users define various items in the house and capture them using the camera which will serve as torturing methods, once the madness starts.

When setting up an alarm, the Android app will prompt the user to picture random places of the house and register them. Once the alarm is active, it will only deactivate if these pre-defined places are once again captured, and successfully identified by the software. This means that you literally have to get up and photograph your bathroom, kitchen and living room, to stop that annoying alarm.

Sleep If U Can is free to download but has a premium version too. 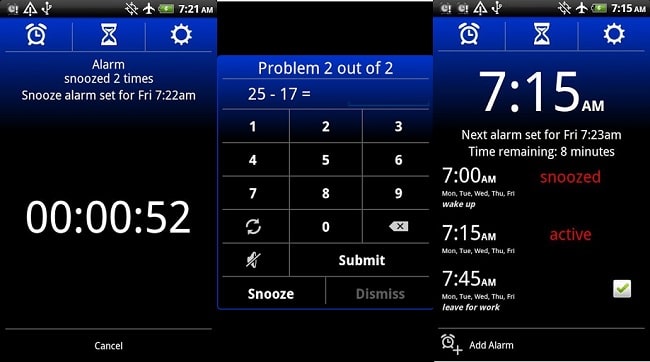 Another great example is Alarm Clock Xtreme, a service which first started to capture attention thanks to their math-based wake-up techniques. Unlike Sleep if U Can above, this app will only deactivate alarms if the user solves a couple of simple mathematical questions, which may even show up as fully-featured problems. As extra attention towards those who fool the clock and sleep a couple more hours, Xtreme implemented various Snoozing options, including a maximum snoozing count and automatic shortening which each snooze used.

These can be defined from the settings menu, before getting inside the bed. Other features allow users to set a random song from the playlist as the alarm and even make the volume gradually increase, as you gently wake up from slumber. Downloading the app is free of charge and it comes with a full-feature set, but also with ads (unfortunately it’s only for Android). 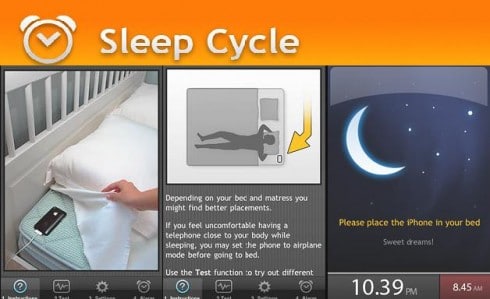 Sleep Cycle is Apple Store’s variant of Sleep as Android, providing many principles to improve sleep quality and your body’s health. For instance, Sleep Cycle analyzes vibrations made during sleep and wakes the user up only in the lightest sleep phase. By achieving the natural wake up feeling of a rested and relaxed mind, the application relies on a 30 minute window to perform its duty.

For instance, when setting up an alarm, Sleep Cycle will ask for the critical time when you should definitely be awake. Basing on time, the application will try to find an optimal wake-up point, as closer as possible to the target, when the alarm should turn on. As developers claim, although the alarm might trigger earlier, the mind will feel rested.

At the end of a cycle, a detailed sleep graph accompanied by statistics will be provided, for those curious enough. Moreover, the software will track how events such as drinking coffee or eating too much can affect your sleep quality. Like usual, waking up can be done on 15 carefully pre-defined tunes or on something from the iTunes gallery. Smooth snoozing was also implemented, through shaking gestures. 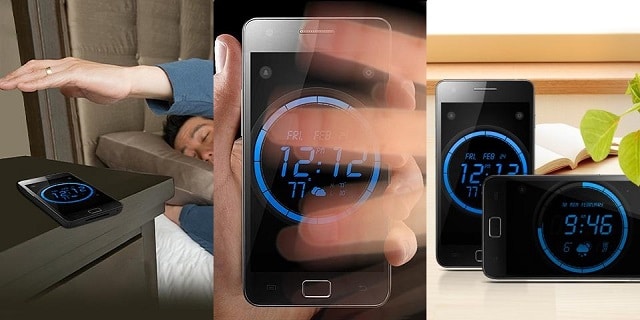 Wave is a simple, sporty alarm application, which also comes with an interesting feature hidden underneath the hood. Besides coming with a healthy dose of color options and schemes, Wave lets users disable the alarm only if they wave over the front facing camera. Although not tricky enough for those used to fall asleep right away, it’s a nice feature that strays away monotony. As a bonus, Wave comes with a couple of weather information streamed live on the main panel, which display current temperature and how the weather is expected to be in the following hours.

Free to download, Wave has a $2.99 version which comes with more coloring options and without ads. 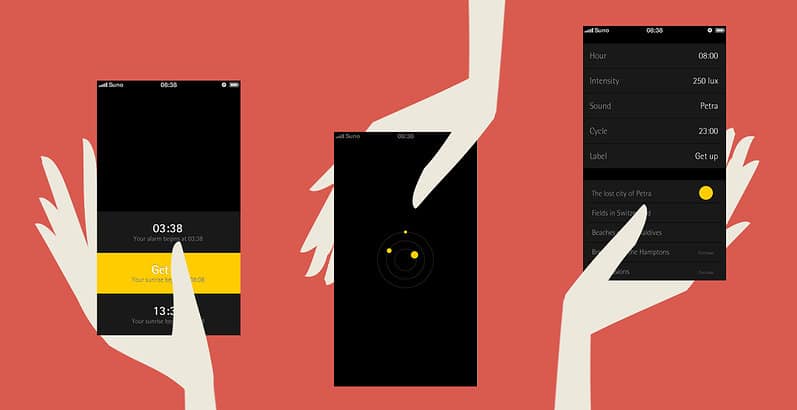 Suno, the quick translation of the sun in Esperanto, is the name of a very intelligent iOS application. Based on the fact that the human body usually wakes up on the warm light of the dawn sun, developers have tweaked the settings of many Apple devices to perform a small trick. Just before the alarm activates, the app uses your iPhone screed and flashlight to gradually brighten the bedroom, mimicking dawn. This is done for a couple of minutes so when the speaker actually starts beeping, or singing, a light will exist in the room.

Another thing that we loved about Suno was the navigation technique. Just like Rise, gestures and actions can only be performed using the hand and, to be more precise, the thumb. Prior to developing, Suno creators intensively studied the hand and decided to incorporate only the most meaningful and simple ways of browsing through the menu.

At this moment, Suno costs around $0.99 and can be downloaded from the Apple Store. 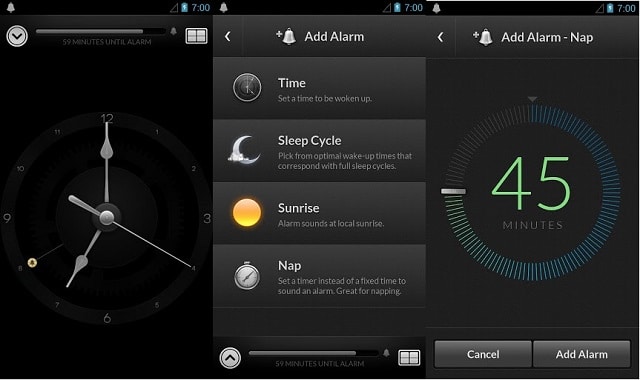 Too few applications, both on Android and iOS, have the double-twisted tongue clock as a default representation. Well, this application is a beautiful exception, letting aside the boring digital clock for a more classic design. Overall, the application is simply beautiful. The menu itself is based on a grey/black/blue theme, from where users can tweak the duration of snooze intervals, the tune of the alarm, the volume and how fast should the volume gradually raise in time. Moreover, vibrations can also be applied and there’s an option to turn on the screen too.

Double Twist can be installed on Android mobiles for $1.99 (there’s also a limited-time trial that gives access to a limited range of features).

Caynax blends the advantages of a classic alarm clock app with the flexibility given by a to-do list. In a few words, this well designed software comes with tons of tweaking options that can help you manage more than just waking up in the morning. There are a lot of granular controls available, which allow users to set up different types of alarms, including quick (for one-time events), daily, outside weekends, on specific dates and even annually.

Each type of alarm can be defined as a profile and then extended towards broader purposes. On top of alarm functionalities, each of these events can have certain tasks attached, letting you manage a whole day up-front.

Distributed free of charge on Google Play, Caynax also comes with a Pro version that improves esthetics, but does not add functionality. 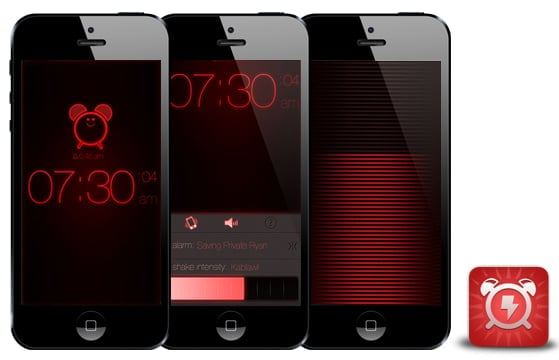 A torturing alarm must exist for iPhone users as well, and we must admit that Wake N Shake does more than it should. At basis, this is a well-designed application, which acts more like a dreadful game, than an alarm. Once activated, an alarm will wake users up through the means of a grim laughter, which can only be silenced by shaking the smartphone, really hard. To picture how tough it is to turn off the alarm, imagine that developers even integrated a user ladder for the most powerful and also, a range of achievements. Here’s a video if you don’t believe us:

Wake N Shake can be bought for $1.99 and it’s only available on Apple devices.

Was this article helpful?
YesNo
TechPP is supported by our audience. We may earn affiliate commissions from buying links on this site.
Read Next
How to Use Android Phone as Webcam for PC
#alarm #android #Best Apps #ios