The rumors about a low-end Android phone from Nokia has been making round for quite sometime now, but for the first time we are seeing the UI of the purported phone, codenamed ‘Normandy’. As always, the leak comes courtesy of @evleaks, who has consistently divulged details about most of the Nokia phones in recent times, including the Nokia Lumia 1020 and Nokia Lumia 1520. 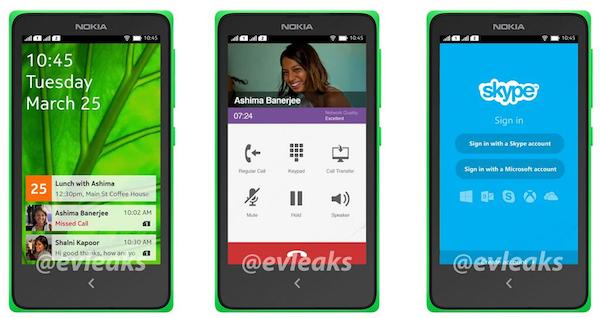 We had resisted writing about the rumors on Nokia’s android phone, as it looked unlikely that the Finnish giant would be allowed o pursue interests in non-WP8 device, specially after that deal with the Microsoft last year. But this latest leak shows that Nokia has put enough efforts in Project Normandy, and rekindles the hope again.

The leaked image shows Nokia’s custom Android skin which looks like a mix of Asha and WP8 design elements. The first screen shows the homescreen along with lockscreen notifications. The clock looks to be inspired from WP8. The second screen shows the Viber app, while the third screen shows Skype. It also shows support for dual-SIMs. But mind you, there isn’t enough proof from the images to say that the phone is running some form of Android OS, except for the taskbar icons on top.

According to The Verge, Nokia’s Normandy will be using a forked version of Android and hence might not come with Google’s services including the Google Play Store. With Microsoft’s acquisition expected to close in a month or two, it remains to be seen if this project will eventually see the light or not.

Was this article helpful?
YesNo
TechPP is supported by our audience. We may earn affiliate commissions from buying links on this site.
Read Next
Nokia Power Earbuds Lite Review: Connecting through Clear Audio against Tough...
#nokia #Normandy