Mobile World Congress 2014 has started with LG’s introduction of three entry-level and mid-range handsets that will once again, bring tribute to the L series. Meet the L90, L70 and L40, a trio of handsets which aim to conquer the hearts and pockets of those who want a decent phone, without overspending.

The third generation of the LG L series is born with three mobile devices that boost metallic colors and integrate narrow bezels. As you’ve probably hinted, all these smartphones come with 3G connectivity and the latest version of Android 4.4 KitKat (which is a very nice treat for a phone with a modest price). Another thing we’ve observed pretty soon is that there’s very few things which set these phones apart, except of course for internal components and size. In matters of design and aspect, one can easily mistaken a model from another. But enough chitchat, let’s get into the nitty-gritty. 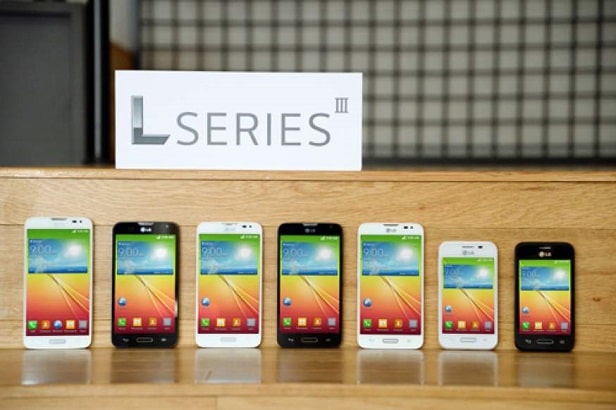 Starting with the family’s strongest, the LG L90 is the biggest model of the series and the most powerful. Specs wise, the L90 integrates a 1.2 GHz quad-core processor from Qualcomm, which should react pretty smooth under moderate stress. Although we do not know exactly the family of the chip, we know for sure that it’s not an 400.

Another interesting aspect of the L90 is the 4.7-inch IPS display that sports a 960×540 pixel resolution, placing the panel in the qHD segment. Besides that, future owners will find 1GB of RAM, 8GB of internal storage and also a healthy 8-megapixel rear-mounted camera sensor. On the front facing side, the L90 comes with a 1.3-megapixel shooter, sufficient for video calls. Taking in consideration the range of the display, LG has carefully fitted a 2.540 mAh battery, which is also removable.

The L90 will launch first in Russia, around March, for an unknown figure (probably the most expensive of the lot, but at a budget when compared to other models from the market). The phone will be delivered with Android 4.4 KitKat out of the box and with 3G capabilities.

The LG L70 – smaller, but still packing a punch

Packed with a 800×400 pixel resolution display that approaches the size of its stronger brother presented up-top, the LG L70 is a more modest version when it comes to hardware. The phone only carries 4 GB of internal storage (which can be expended up to 32GB through a microSD card), a 1.2 GHz dual-core processor and a more modest, 2100 mAh battery (also removable). When it comes to RAM storage, the same figure has been kept (1GB).

Picture wise, the L70 will integrate a front-facing camera with VGA resolution and a back-mounted shooter of 8 or 5 megapixels, depending on the buyer’s location. Other details like connectivity and operating system have been left unchanged.

LG also has a smaller variant of the L series, pictured in the L40 right above. As you can see from the picture, the L40 is the smallest of the crew, carring only a 3.5-inch display with 480×320 pixel resolution, which is more than modest for this age and time. We also spotted that the display quality in this model is a bit more careless, with the panel being less bright than its brethren.

When it comes to internal, the L40 has the same 1.2 dual-core processor, 4GB of internal storage and only 512 RAM to play with. In matters of connectivity, 3G has been included, which is a fair treat considering that this small, and probably cheap version will also carry Android 4.4.

The rear camera on the L40 is just 3-megapixel strong and there’s no mention of a front-facing shooter. Depending on the country, the phone will have a 1700 mAh or 1540 mAh battery.

Was this article helpful?
YesNo
TechPP is supported by our audience. We may earn affiliate commissions from buying links on this site.
Read Next
LG TONE Free FP9 Review: Earbuds that Stay Clean and Sound Clean
#LG #MWC 2014