Qualcomm has grown to become one of the biggest chip makers in the world, and on their shoulders lies a huge responsibility – to produce the brains for some of the best smartphones and tablets in the world. We already have some amazing devices launched, but come 2015, they will be forgotten and the bliss of new products will win away the hearts of users. Qualcomm has already made public its roadmap for 2015, outlining and describing the new 810 and 808 chipsets.

Just like the Snapdragon 610 and 615 chipsets announced at Mobile World Congress, the new duo will also come with 64-bit support. But the 810 and 808 are far more superior, of course, as these represent the best processing performance Qualcomm can stuff inside such a tiny object. Of course, the new 20nm chips will be smaller, lighter and more power efficient, with the Qualcomm 810 being the best kernel out of these two. 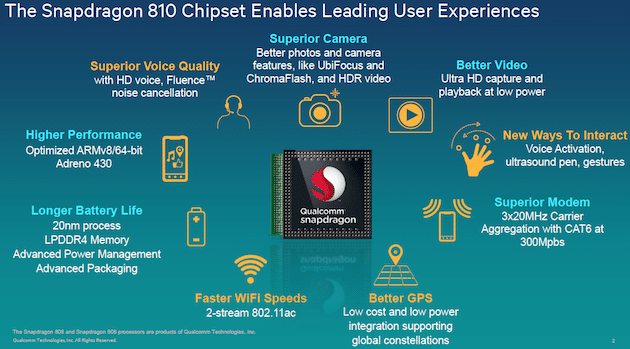 The Qualcomm 810 will come with four Cortex-A57 cores for power-intensive tasks and four lower-power Cortex-A53 cores that the device will use when you aren’t performing “heavy” tasks. The chipset will come with support for 4K displays, which means we’ll see some amazing devices next year. Also, it will support LPDDR4 RAM, which is faster and more efficient than LPDDR3, and there will be voice activation and dual Image Signal Processors for better imaging.

As for the Adreno 430 graphical processing unit, it is said to be 30 percent faster than the 420. The roadmap also reveals that there will be support for Cat 6 LTE-Advanced, meaning that the LTE radio modem is integrated directly into the chip, delivering a better performance than when it was separate. Improvements to the WiFi connection will be made thanks to the 2-stream multi-user MIMO.

The less powerful and cheaper version is the Qualcomm 808, coming with six cores, two of them being A57 and four A53, 2K display support and LPDDR3 RAM. So, we can see that the 808 will get released in 2015 with the specs of 2014 flagship devices. And it makes sense. What’s now the best of the best will become next year the second best, and Qualcomm will still make good money out of it, as there are plenty mid-range or mid-range to top-range devices out tehre.

It will also sport an Adreno 418 GPU, which claims to be 20 percent faster than the Adreno 320. Despite being the leader of the mobile market in the production of chipsets, Qualcomm has to face increasing pressure from MediaTek, Intel and NVIDIA. Not to mention Apple, which has been the first to come with the 64-bit architecture with the A7. And with the launch of 64-bit supporting chips Snapdragon 610 and 615, Qualcomm will be behind “just” by one year.

What we think of this
The evolution of mobile devices is unbelievable, but we must wonder – when will it really stop or just meet hindrances? Just how much power do we need in our smartphones and tablets?
Was this article helpful?
YesNo
TechPP is supported by our audience. We may earn affiliate commissions from buying links on this site.
Read Next
Snapdragon 782G vs Snapdragon 778G Plus: What Has Changed?
#qualcomm