If you ask me what’s the first and most important accessory I pack into my travel bag, I’d say a power bank. With ever increasing dependence on smartphones and tablets, power banks (or portable chargers as some would like to call) have become a core accessory in our day-to-day lives. The phones are getting smarter by the day, but the batteries powering them are just as dumb as they were a few years back. Hence these portable chargers have become absolute necessity while traveling. 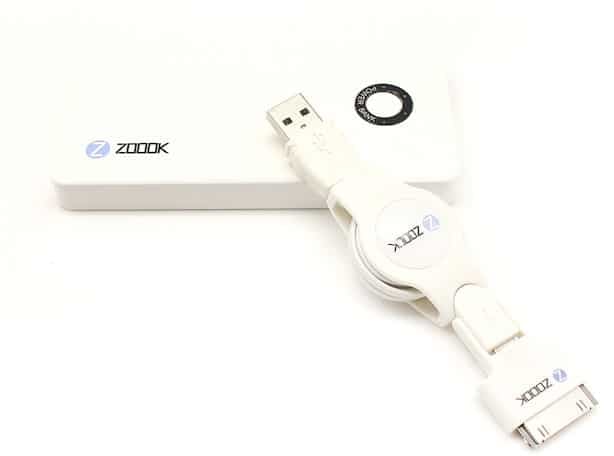 If you are in the market for power banks, you’ll see that several manufacturers are offering power banks in various shapes and sizes, and in variety of price segments. With such a heavy surge of local and international brands, it gets immensely tough to pick and choose a reliable power bank. Over the past few weeks, we have been testing the Zook ZP-PB10000, so how good is it? Let’s find out. 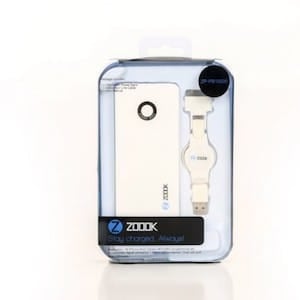 Zook is a new entrant to the Indian market and have several products in their kitty, ranging from headphones to 3G data cards to power banks. I was little skeptical when I decided to review their power bank, considering I had never heard about the company before. But my fears started to settle down once I received the package. The packaging was simple and neat, with transparent plastic showing off the contents.

The Zoook ZP-PB10000 comes in a tough plastic frame with metallic finish. The shiny white casing is beautiful to look at and has a nice grip. The unit weighs around 232g which isn’t bad considering it contains a Lithium-Polymer battery of 10,000mAh. You’ll find 2 USB outputs: 5V 1.0A and 5V 2.1A, specially designed to charge phones and tablets respectively. The microUSB port in the middle is used to charge back the battery pack. It also comes with a bright and powerful flashlight for emergency usage. On top, you will find the ON/OFF button surrounded by 4 LED lights which indicate the battery left.

The Zoook ZP-PB10000 comes with a retractable Telescopic Line cable, which is not only long enough, but also easy to keep from getting entangled. This is a great touch from Zoook, and should help them differentiate from their competitors. The cable has a microUSB charging pin at the other end, which can attach itself to a 16-pin charging pin for older Apple products. 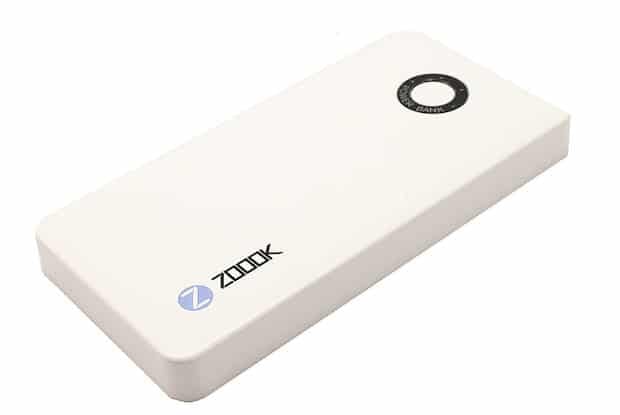 No matter how well you package the device and how good the build quality is, at the end of the day, what matters the most is the actual performance. This 10,000mAh battery is said to have 500+ recharge cycles, which is a norm with most Lithium-Polymer batteries. Thanks to two USB ports (1A and 2.1A), you can simultaneously charge two of your devices. If you have an iPhone, you can charge it from 0 to 100% for almost 6 times back to back. Android phones usually have bigger batteries, so you can expect a phone with 2,500mAh battery to be charged 3-4 times with this power bank.

But these are theoretical claims. What’s the real world usage like? During my recent trip to MWC in Barcelona, I put this Zoook power bank to test. I could charge my LG G2 twice over during my flight while I charged my Moto G simultaneously in the middle, and I still had some juice left at the end of the day. Although I cannot vouch for complete 10,000mAh of battery, I can say it’s somewhere close to that mark.

I have previously used the hugely popular New Trent iCarrier 12,000mAh power bank, and can safely say that Zoook matches the reliability of that. Unlike New Trent iCarrier, Zoook doesn’t use a proprietary charging cable to recharge the battery, and the retractable is a great addition as well.

There are some minor glitches like the LEDs don’t do a good job of accurately showing the battery left, which can get irritating at times, and the plastic case is prone to scratches. With an MRP of Rs.3995 (~USD 67), it’s extremely over-priced, but the actual selling price is close to Rs.2599 (~$43) on Amazon, which makes it a good buy. Yes, there are few other brands which sell similarly specced power banks at less than Rs.2,000, but I’m not sure how reliable they are. Zoook ZP-PB10000 gets a big thumbs up from our side.

Xiaomi Mi Boost Pro Review: One Power Bank to Charge Them All!
Read Next