While some features are built on the base which was put down by iOS 7, there are some new features which iOS 8 brings. These add much needed productivity options, making your iPhone much better suited for becoming your personal assistant.

Multitasking and and ease of access were the keywords for iOS 8, and Apple certainly delivered on this front. Different gestures and swipes make navigating iOS 8 a breeze, as you’ll see soon enough.

Quick Access People and Multitasking – Until now, iOS users double tapped the Home button to switch between different apps, and with iOS 8, this functionality has been improved upon by adding the user’s favourite contacts with corresponding options to send messages, call or go on FaceTime.

Updated Mail App – I can safely say that I was never a fan of Apple’s default Mail app, which lacked many features in the past. But in light of the new updates it has received, I can say it is quickly becoming a good service to use. Apple added gestures to the app, allowing users to quickly mark as unread, flag or delete messages. Also, one update which is very well welcomed is the option to minimize an email message while you are writing it so you can take a quick glance of your inbox. Another option which was introduced in iOS 8 is the ability to add Calendar events directly from the Mail app.

Improved Notifications – The entire Notifications functionality was updated in iOS 8. The Interactive Notifications allow users to quickly access and deal with Facebook, Email or Calendar events without having to leave the app they were currently using.

Spotlight – Spotlight was also updated in iOS 8, and can now show results from the App Store, locations, news, Wikipedia articles, music, restaurants (you get the idea) and much more. This is a useful feature to have, but from what I’ve seen on Windows 8, not to everyone’s liking.

Keyboard with QuickType – Some slight updates were made to the iOS 8 keyboard, making it easier to type messages thanks to both the improved UI as well as the QuickType predictive dictionary which learns the user’s writing style and suggest relevant words to their conversation.  Also in the messaging department, Apple has improved upon the Group messaging feature, which now has a very handy Do Not Disturb function as well as the the ability to rename threads or add and remove other people. The “Share My Location” option has also been updated.

iMessage – The iMessage app has been granted the option to send and receive audio and video messages. The process of sending these short messages is very simple, being accessible with only a few taps. In terms of Dictation, Apple has made it much more accessible by adding support for multiple languages.

iCloud Drive– iOS 8 brings an update to Apple’s cloud storage system in the form of iCloud Drive. The service allows users to organize personal files into folders as well as connect iCloud enabled third party apps which will each have a folder of its own. All the files are accessible across all your devices, and it provides Finder integration as well. One other feature is Windows compatibility. 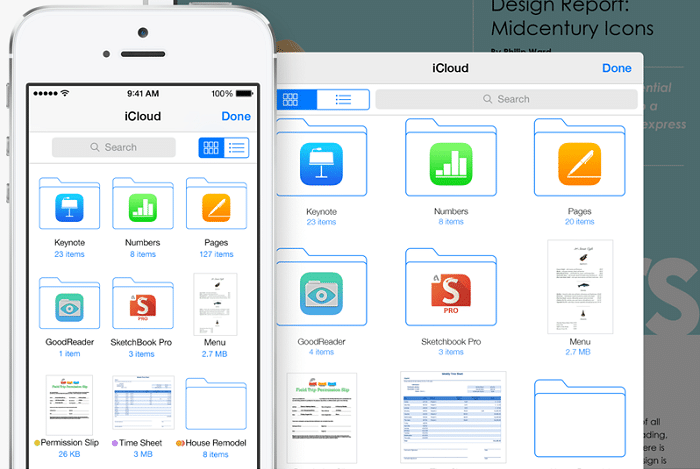 Photos – Some of the best updates we’ve seen in iOS 8 is the improved Photos app. With integration to iCloud, Apple brings the same functionality that Google has added with Mobile Backup to Android devices. Searching photo galleries is also done with great ease in iOS 8 but what really caught our eye was the photo editing options which make iOS 8 a tiny Photoshop. These include cropping, colour and light enhancements as well as fine tunes. Instagram-style filters are also available in iOS 8, and one other cool feature is the ability to create time lapse videos with great ease.

Family Sharing – This family-oriented feature allows users to connect their iDevices with the ones that their other family members own. By doing this, all their media libraries (Music, iBooks, Movies, Apps etc) will be accessible from all other devices. The functionality of this service extends to location sharing and parental approval for buying apps.

Health – Something which was highly anticipated for iOS 8 was Apple’s own health app. And we’ve seen it in action today at WWDC 2014. The new platform offers an extensive dashboard containing the user’s information (calories burned, sleep pasterns etc) but at the same time it allows the owner to input medication, nutrition and other relevant information. The platform for combining multiple health apps was also introduces, HealthKit, which is designed to integrate the Health app with other third party fitness apps.

Other updates include Siri integration with Shazam, Enterprise features and Developer SDK app which includes thousands of APIs that developers can use to add more functionality to their apps. In terms of availability, iOS 8 will become available this fall and it will be compatible with the following devices:

Was this article helpful?
YesNo
TechPP is supported by our audience. We may earn affiliate commissions from buying links on this site.
Read Next
With Football Manager 2023 Touch, Apple Arcade finally has its “killer ...
#apple #ios 8 #iphone