All might not be well with Xiaomi India, but that is not deterring them from launching the 4G version of Redmi Note starting next week, i.e Tuesday, December 30th on Flipkart. Xiaomi had launched the Redmi Note 3G earlier this month, but had to stop the sales after the Delhi High court ruling which prohibited them from importing and selling their mobile handsets in India for allegedly infringing on Ericsson’s patents. Since then, the court had partially lifted the ban, which means the company can sell certain handsets running Qualcomm’s Snapdragon chipsets instead of the ones made from Mediatek. 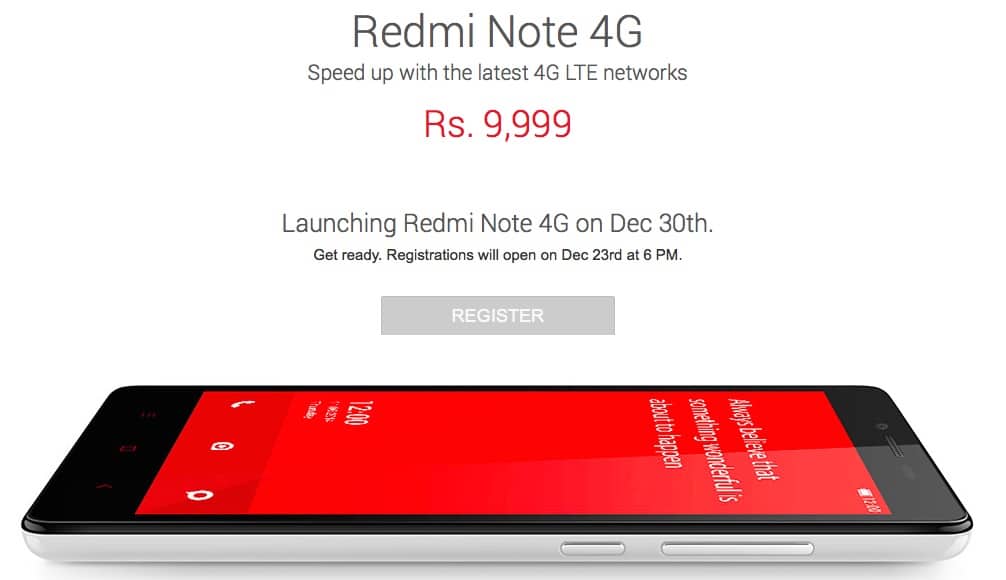 The Redmi Note 3G, which runs on Mediatek’s octa-core processor is off the shelves, but the 4G version, which runs on the quad-core Qualcomm Snapdragon 400 processor will be up for sale from next Tuesday for Rs.9,999 (~$161). Interested users can go register on Flipkart starting 6pm today, and try their luck at the flash sale scheduled to go live at 2PM on December 30th.

Earlier today, Amazon confirmed that Yureka, which is the first ever handset under Micromax’s YU brand, will go on sale at 2PM on 13th January 2015, which is incidentally a Tuesday, something which has become synonymous with Xiaomi’s flash sale. We all knew Micromax is following Xiaomi’s footsteps when it comes to their Internet-only brand, but the choice of day and time (Tuesday, 2PM) should raise some eyebrows. Again, the purchase model is similar too, as users are required to register for the sale, which will be sold on first-come-first-serve basic (aka flash sale).

The Redmi Note 4G features a 5.5-inch HD display and has 2GB of RAM. There’s 8GB of onboard storage, with an option for expansion via microSD up to 64GB. The Redmi Note comes with a 13MP rear camera and a 5MP front camera, with 3100mAh battery to fuel the device. Unlike the Redmi Note 3G which runs on Android 4.3 Jelly bean, the 4G version has Android 4.4 KitKat with MIUI v5 on top of it. The device supports both the 4G LTE bands in India, but comes with a single SIM unlike dual-SIM on the Note 3G.

With Yureka, which seems to have better specs on paper (and lower price as well) up for launch in the next few weeks, it’ll be very interesting to see how the Redmi Note 4G will fare on its debut. Don’t be surprised if Xiaomi pulls a rabbit out of its hat and announce a better deal on Dec 30th.

TechPP is supported by our audience. We may earn affiliate commissions from buying links on this site.
Read Next
With Redmi A1, is Xiaomi Resurrecting the Android One Dream, but Without Google?
#Redmi Note 4G #xiaomi