“Cricket? It is a nightmare to make a cricket game. So many rules, so many perspectives. It is not just pass, pass, pass and shoot, or hit as hard as you can. You have to worry about so many variables – fielders, type of bowlers, type of delivery…making a cricket game, my friend, is not as easy as it sounds!”

That was the answer I got from one of my friends in the game developer community when I asked him why there were not too many good cricket games around a couple of years ago. Not too much has changed in the interim period – cricket games on the mobile platform continue to fluctuate between the painfully mediocre to the utterly complex, although there are some notable exceptions, like Don Bradman cricket and ICC Pro Cricket.

One cricket game that still has managed to attain a near cult status, however, is Stick Cricket. And it has done so by what one can only call a brutal over simplification of the game – one that makes purists blanch. The folks at Stick Sports simply kicked the bowler out of the playing equation and turned the game into a pure slogfest from the batsman’s side (well, the sport’s controlling body seems to be pretty much doing the same, so one cannot be holier than thou about this). Even batting was simplified – you just had to choose which side of the pitch to hit the ball. It was all down to timing. You did not even control the running between the wickets – the game simply told you how many you had scored from your willowed endeavour. Some complained about a game of nuances being reduced to a timing-based button masher, but the thousands who downloaded it were just happy to get a version of cricket that had a zero learning curve and could be picked up and put down in best casual gaming tradition. 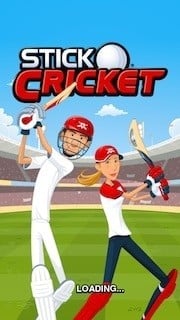 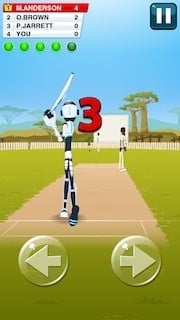 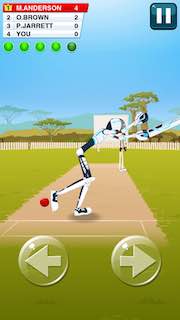 So when Stick Sports announced a sequel to Stick Cricket, it created more than a mild flutter in the cricket gaming crowd. Speculation was rife about what the game would have – would the bowlers finally get a say in matters, would you control running between wickets, would there be field placements and so on.

For, Stick Cricket 2, like the original, sticks to making cricket a batsman’s game. Your role is still largely limited to choosing which side of the wicket to hit the ball and timing your button press for maximum impact. You still have no control over bowlers, field placements or running between the wickets.

But know something? The game once again scores through its simplicity. The graphics have been given a thorough makeover and while you still play the game from behind your batsman, colours are easier on the eye, stroke options have increased (although you once again cannot choose which shot you want to play – that’s worked out by the game depending on your timing) and yes, you can play the game in portrait as well as landscape mode (allowing you to play it one handed). You can also choose to play as a woman cricketer, an idea which we love. Where the game differs most significantly from its predecessor is in plonking you in a series of missions, rather than matches. So while in Stick Cricket, you ended up batting to get a certain number of runs as part of a match, here the targets are more well, individual. Rather than being a bit of a tournament in which you had to face different teams, as in the first edition, this time around, you actually have a series of tasks to accomplish. And just how well you accomplish them will determine your progress in the game.

As you stack up scores at different levels – doing well gets you a maximum of three points, you keep progressing and also keep earning special pieces of kit, like better bats, gloves and so on. You also unlock innovative shots like the ramp and the scoop. Of course, you can fork out some cash and buy them too (any purchase gets rid of the pesky ads on the game as well), but if you are patient enough, fear not, you will be able to get through the game without paying a penny. Mind you, that will take quite a time as there are dozens of levels to get through and they keep getting harder as you move up the ranks – the developers have been clever enough to scatter some very tough tasks among relatively easy ones, so you do not get too discouraged. For instance, a task that involves just getting bat on ball for a few overs (no matter how many you score) might be followed by a challenge to hit as many sixes in succession as possible in a couple of overs. Get into the international level and you start getting the big star names to bat as and bad against. 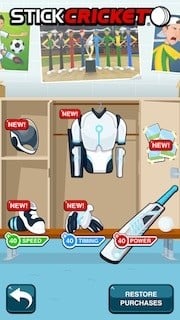 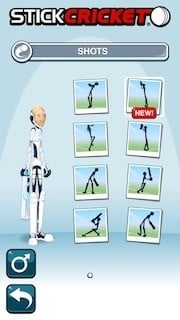 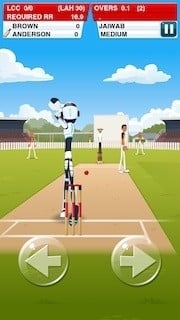 At its core, Stick Cricket 2 is still the Stick Cricket of yore. Honestly, we don’t think that that is a bad thing, as it remains incredibly easy to play. The task-based levels are a whole lot of fun and the random way in which the game plonks you in the role of a right handed batsman or a left handed one adds to the challenge. No, there is no wholesale graphics makeover, but the tweaks made are eye-catching (you look around in irritation on missing a delivery for instance or on getting bowled), and the bowling is definitely more challenging (we opted to cough out cash to improve our kit at one stage when we could not cope with some of the pace bowlers). The option of unlocking different bats, shots and the like also add to the fun. Speaking of fun, the irreverent streak of humour that marked the first game is here as well – among the options you get to bat with are a carrot, a mallet and a banana, and if you want to bat with a snorkel as headgear, you very well can!

Our summary of Stick Cricket 2? Well, it is the same game with a fresh coat of paint (graphics) and some very interesting gameplay options. No, we won’t call it a perfect encapsulation of the Gentleman’s Game on a handset, but it is by far the most addictive. And it is free too.

Was this article helpful?
YesNo
TechPP is supported by our audience. We may earn affiliate commissions from buying links on this site.
Read Next
Voila AI Artist: Cartoon Yourself with the Power of AI
#app review #Stick Cricket