SwiftKey Clarity, Fleksy and the Future of Extension Based Android Keyboards

I’m writing this from my OnePlus One[ref]The first draft of this article was written on my OnePlus One. You can read the unedited, Android version here. It was then polished and edited on my Mac.[/ref] in an under appreciated Markdown editor called iA Writer. On Monday, SwiftKey announced a new experimental software hub called Greenhouse. Their first product is called Clarity. It’s an experimental keyboard aiming to correct multiple words (phrases) at once. On the same day I discovered Fleksy had updated their app with extensions. I’ve been playing with both keyboards alternatively and this is their story. 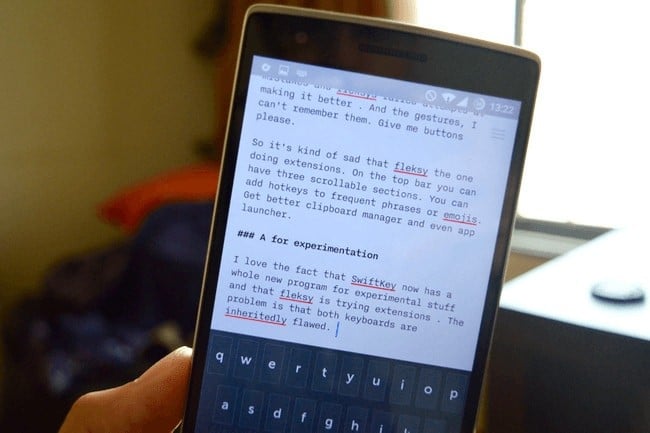 They’re opposites, really. Clarity is as simple as a keyboard can be on the surface. There are no special options, prediction bar or gesture typing. Clarity’s dedication to simplicity is almost to a fault. You have very little control over the typing process. It’s very hard to go back and correct a spelling mistake. And these little things leave you frustrated.

Fleksy ($1.99, free 30 days trial available) on the other hand is immensely opinionated when it comes to typing on Android. It’s filled with gestures I can’t remember and now a whole new extensions bar.

The problem with Fleksy is that its core writing part sucks. The keyboard has no key separations. I can never hit the right keys. It feels like the app wants me to make mistakes so it can then come out and boast about how it made it all better. But my brain doesn’t work that way. Even when I’m typing really fast, I notice the catastrophic spelling mistakes and Fleksy’s failed attempts at making it better. And the gestures are a cognitive nightmare. Even things you could easily get done with buttons require gestures. For instance, you can’t tap on a word from the predictions bar. There’s not enough space to do that. You need to swipe up with one finger. Give me buttons, please. 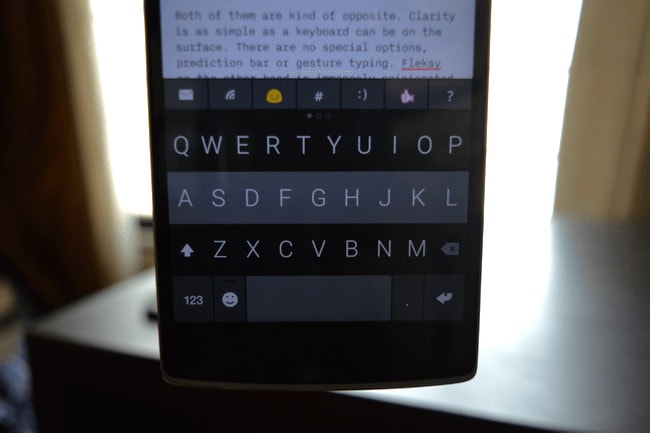 And yet, Fleksy is the one exploring extensions. On the top bar, you can add three scrollable sections. You can add hotkeys to frequent phrases or emojis, get better clipboard manager and even an app launcher. The clipboard manager extension comes with a sliding cursor which is pretty useful and way better than Android’s selection tool.

I love the fact that SwiftKey now has a whole new program for experimental stuff and that Fleksy is trying extensions. We’re finally moving from adding themes, figuring out the basics or just smooth typing. The problem is that both keyboards are inherently flawed.

I think SwiftKey is our only savior. It’s one of the few apps that’s gotten typing on Android right for years. The prediction engine is really good. So is the keyboard layout. I can actually type fast on SwiftKey without worrying about dealing with spelling mistakes or ending up frustrated. 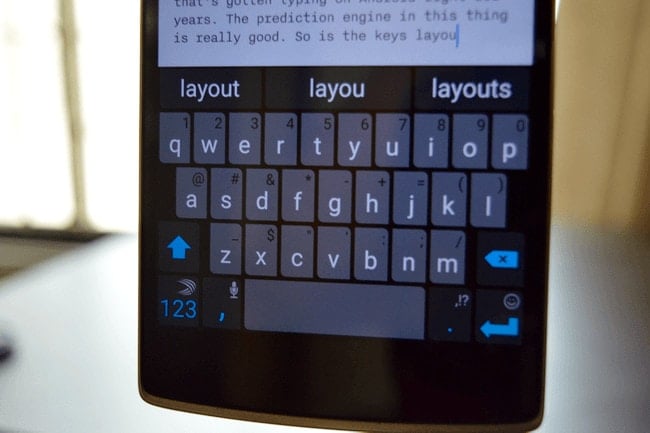 I’ve tried a lot of third party keyboards on iOS 8 and none of them are as good or stable as the default one, not even SwiftKey (which I’m hoping will change in iOS 9 or 10). But what I liked about them were the ambitious feature set. There’s a TextExpander keyboard that expands snippets of text, Clips manages your clipboard, and, of course, there are many GIF and meme keyboards.

What I would like to see is extensions in SwiftKey for Android. They’re already selling themes for a dollar each, they can do that for extensions as well. Thousands, if not millions like myself would be happy to pay a couple of dollars for the ease of use.

Wouldn’t it be great if you could expand text snippets, get supreme clipboard management, GIFs, shortcuts and more from just one keyboard. And that keyboard is something you can actually use daily without pulling your hair out? Maybe there’s a way to securely integrate LastPass in SwiftKey as well – 1Password for Android already offers a similar solution.

Fleksy trying out extensions is great for competition. I hope SwiftKey will take notice and start adding such pro features in their own app. As for Clarity, it’s still very far from being your only keyboard. But I hope parts of it make it to SwiftKey someday.

Below is a sped up montage of me writing using all the three keyboards.

I don’t see myself writing articles on an Android phone anytime soon. But if you plan on writing long email replies or if you’re a heavy IM user, SwiftKey is still the most reliable option.

Realme unveils roadmap for release of Realme UI based on…
Google and Jio partner to develop Android-based operating…
Realme UI based on Android 10 announced in India
Explained: GaN (Gallium Nitride) and the future of tech it…
What is H.266/VVC (Versatile Video Coding) and what does it…
Apple M1 and its prospects for the future of computing on…