Drones are becoming increasingly popular, be it for aerial videos, surveillance or for action sports. We’ve talked before about AirDog and Hexo, two autofollowing drones which have managed to get funding of more than $1 million on Kickstarter. Today we’re talking about a similar device, but one that comes with its own camera and with a better following technology. 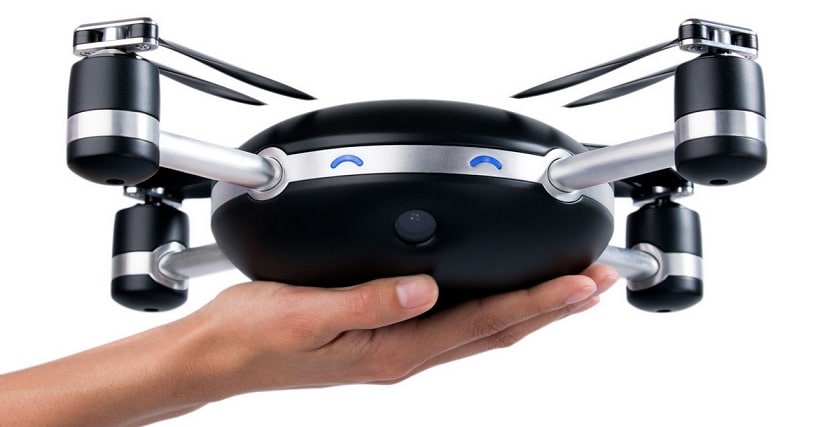 Lily Camera is a smart drone which flies itself, and you don’t need a controller to maneuver it. You just throw Lily in the air in order to start a new video, and it will automatically start following you thanks to a GPS tracking device that you wear on your wrist. Both the drone and the GPS receiver are waterproof, so you will be able to use it when it’s raining or while you’re rafting.

Lily is described as the world’s first throw-and-shoot camera and it can shoot HD pictures and videos. You can pre-order Lily for $499 but after pre-sales are over, the device will be priced at $999. The device is compact and portable, as it should be, weighing 1.3 kilograms. As you can see for yourself, the device has a nice design, mimicking a happy face. The device is made from midnight black polycarbonate and brushed aluminum.

The tracking device has 4-hour battery life and charges via micro USB. It also comes with a microphone that records high-quality sound which Lily automatically synchronizes with the video it records. If Lily runs out of power when it is in the air, the tracking device will send you pulse vibrations when the battery is running low. Nonetheless, if you don’t land it, Lily will smoothly land itself before running out of battery.

The camera can shoot 1080p HD video at 60 fps, 120 fps Slo-mo at 720p and 12 MP pictures. You can use it picture-taking mode to make a pretty cool group photo. Other camera specs include video FOV of 94º, H.264 codec and .mp4 file formats, digital gimballing, image stabilization and fixed focus.

Regarding its sensors, it comes with an accelerometer, three-axis Gyro, magnetometer, barometer, and GPS. It also comes with status LEDs (if Lily’s eyes are solid blue, then she’s good to go), a power button, a micro SD card slot provided with a 4GB capacity and a charging port. The companion app is available on iOS and Android and you can use it to change camera settings, create custom shots and edit and share content.

The work on Lil started in September 2013 in the basement of a UC Berkeley robotics lab, where Henry Bradlow and Antoine Balaresque built the first prototype using a Raspberry Pi and an Arduino. And back in Spring of 2014, they received funding from investors Shana Fisher and SV Angel, and this is perhaps the reason why they haven’t chosen to seek for crowdfunding. Have a look at the video from below and see it in action for yourself.

Was this article helpful?
YesNo
TechPP is supported by our audience. We may earn affiliate commissions from buying links on this site.
Read Next
The Best Cheap and Affordable Drones You Can Buy [2019]
#Drones