They say that well begun is half done, but for Xiaomi in India, the insanely quick start provided by the likes of the Mi 3 and the Redmi 1S has been a bit of a double-edged sword. Yes, those two products with their too-good-to-be-true price tags did create a sensation and multi-second sellouts online (the Mi 3 came to India at Rs 13,999 and the Redmi 1S at Rs 5,999 and neither at the time of its launch had anything remotely close to it in terms of competition) but on the flip side, they also raised expectations. Raised them to the extent that some considered the Mi 4 to be too expensive at Rs 19,999, and questioned whether they should be getting more from the Redmi 2 at Rs 6,999. Both those worthies were good products in their own right, but unlike the Mi 3 and Redmi 1S, had to contend not only with some rather stiff competition (the likes of the Honor 6 and OnePlus One, for instance) but also with customers who wanted even more at an even lesser price. 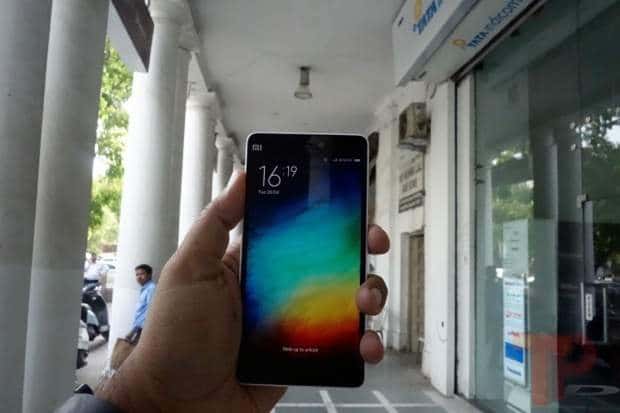 And with the Mi 4i, Xiaomi can claim to have got right back into the good-specs-at-an-unbeatable-price zone. No, it will not make jaws drop the way the Mi 3 did, but in many regards, it is pretty much in a zone of its own at its price point.

The Mi 4i also sees Xiaomi venture into a markedly different design ethic from its previously launched devices in India. It is a blend of plastic (or polycarbonate as it is being increasingly referred to) and glass but seems made using a different design manual from its predecessors. The gently curving backs have been replaced by relatively flat ones, and the sides are relatively straight too, giving it a slightly box-y look. What however, is remarkable is how amazingly compact it is – a fact we had remarked about in our detailed initial impressions of the device. 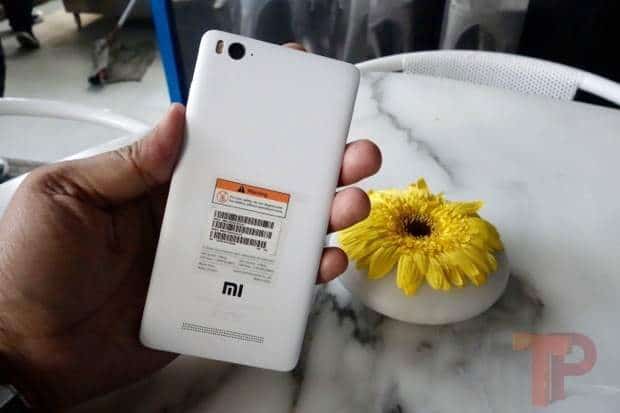 Although it features a display of the same size as on the Mi 4 and actually has a bigger battery (and dual SIM connectivity), it is actually shorter, thinner and lighter than that worthy. The Mi 4’s proportions were 139.2 x 68.5 x 8.9 mm and the phone weighed 149 grammes, and we felt that the phone was quite compact. Well, the Mi 4i makes it look large – it is 138.1 x 69.6 x 7.9 mm on the proportion scale and at 130 grammes is just a feather heavier than the iPhone 6, which has a smaller display. The back has a slight matte finish which will keep it smudge free – only the white colour is available in India, but all said and done, this is perhaps the most compact device with a 5.0-inch display we have seen. It is reassuringly solid, looks smart (the metallic volume and power/display on/off keys on the right look very nice as well) and will fit most palms with ease – that is not something we can say about a lot of devices these days.

It comes with some very decent hardware (a 2nd generation Qualcomm Snapdragon 615 processor with 2 GB RAM, 16 GB storage, 4G, dual SIM connectivity and 13.0-megapixel and 5.0-megapixel cameras), but where the Mi 4i cuts through the competition is in the display department. At Rs 12,999, it is the first notable device to come with a full HD display. And well, it is not just about the pixels, Xiaomi has put in some tech wizardry in here and dubbed this display the Sunlight Display. Keeping out the tech gobbledygook, the contrast levels of each pixel on the display are automatically adjusted to give you a better reading experience in sunlight – and yes, it actually works. It is easily the best display we have seen at this price point, and in fact, is better in terms of brightness and colour reproduction than some devices priced twice as much. If the supporting hardware is a decent deck, that display is the Ace of Spades. And surprisingly, that compact frame contains the biggest battery seen on a Xiaomi device in India – a 3120 mAh affair (the Mi 4 had a 3080 mAh battery). The phone is also the first from Xiaomi to come with Android L out of the box, with MIUI 6 over it.

A bit of a damper is the absence of a microSD card slot, which limits you to the 16 GB onboard storage on the device, although the phone does come with support for USB on the go. Some consider this to be a deal-breaker, but honestly, we have seen the Moto G coming with lesser storage at the same price and still being a massive hit, so we guess the rumors of its being a massive factor are exaggerated. All said and done, the Mi 4i sits very nicely between the Redmi Note 4G and the Mi 4 in the spec department. Not a bad place to be at all. The other specs might be replicated by some rivals on paper (the Yureka sports a Snapdragon 615 with 2GB RAM as well), but that display pretty much puts the Mi 4i in a different category. 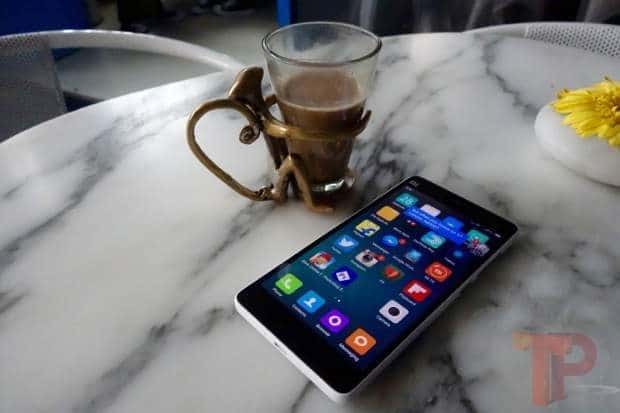 In terms of performance, the Mi 4i is generally a smooth performer for most basic tasks, and pulls out some very impressive benchmark scores. Although MIUI 6 seems to have been toned down for it (we did not see uninstalled apps disappear in a shower of pixels as we did on the Mi 4), we did see the odd lag creep in from time to time as the storage got filled up and we ran multiple apps – no, this is not quite the barnstormer that the Mi 3 was, but we are again going to point out that for its price point, it delivers more than enough bang for its buck. It is certainly a country mile ahead of the likes of the Moto G (second generation), although some might find the Cyanogen-driven Yureka just a bit smoother in the multi-tasking department. 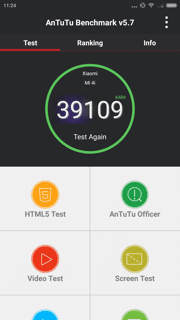 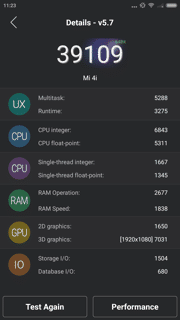 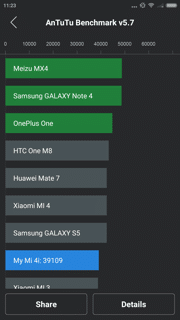 Where, however, the Mi 4i pretty much batters everyone is in the multimedia department. Xiaomi’s devices have always come with good cameras and the 13.0-megapixel shooter on the Mi 4i carries forward that tradition, with very good handling of colors and detail, especially in good light conditions. No, it is not quite as good as the one on the Mi 4 (although it delivers slightly more realistic colours than the Mi 4, which tended to lean towards over saturation), but it is definitely a step ahead of whatever the competition has to offer. The front facing camera with its beautification mode and age-guessing tricks is a good one too. Sound quality is very good too, both over loudspeaker and headphones. The display, of course, makes playing games and watching videos an absolute delight – and yes, it does seem to alter very subtly as the ambient light increases, although it can sometimes take its time doing so. Mind you, playing high-definition games did result in some units of the device heating up, an issue Xiaomi claims to have addressed through an update.

To know more, you can check our detailed camera review

The phone easily lasted a day of normal to heavy usage with a couple of hours of calls, mails and social networks on push mode and some photography and gaming. Decent enough, but we expected more, when you consider that the Mi 4 with a smaller battery lasted well beyond a day of similar use. Perhaps that sunlight display does soak up battery juice or the Snapdragon 615 heats up a tad more than Snapdragon 801.

With the Mi 4i, Xiaomi returns to the territory it had occupied with the Mi 3 and the Redmi 1S – of simply offering more than any other notable brand at a particular price point. The closest we can think in terms of real competition is perhaps one of the 2 GB variants of the Asus ZenFone 2 which packs in a full HD 5.5 inch display, a quad core Intel Atom processor, 2 GB RAM, 16 GB storage, and a similar 13.0-megapixel rear camera and 5.0-megapixel front camera combo. However, it comes at a higher price, at Rs 14,999, and does not quite have the same kind of display quality or sleek build that the Mi 4i does. The likes of the Moto G (second generation), the Honor 4X, the Lumia 640 (and 640 XL for that matter) and Yureka are not really in the same league. [Update: The new entrant, Phicomm Passion 660 has similar specs with an option for microSD expansion, but comes with the older Android 4.4 KitKat for Rs.2,000 less. 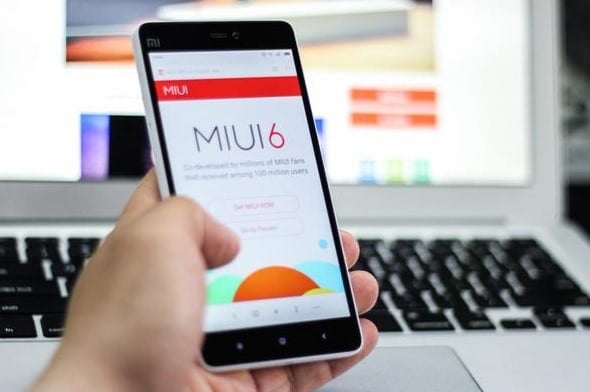 No, it is not perfect – we would have liked smoother multi-tasking and a bit more out of that battery (and at the time of writing, we were awaiting the responses of those who had faced heating issues about the effectiveness of the update issued to tackle them)- but at its price, the Mi 4i is well ahead of what its competition has to offer and is in our book, the best phone you can get in the highly competitive sub-Rs 15,000 category, and is certainly better than some brands priced well above that as well in terms of performance and design (we still cannot get over how compact it is, to be honest). Familiar territory for Xiaomi. Once more.

Was this article helpful?
YesNo
TechPP is supported by our audience. We may earn affiliate commissions from buying links on this site.
Read Next
Skullcandy Mod Review: Betting on doing the basics well
#review #Xiaomi Mi 4i