There was an audible gasp of surprise in the room when Micromax CEO Vineet Taneja revealed the price of the latest device from the company. “This is a trick. He is going to make the numbers roll down to a lower figure,” one of the bloggers in the crowd whispered. Well, he did not.

If you had told us a year ago that Micromax would be launching a device which would be taking on all comers on design and after sales service, we would have insisted you have your breath analysed for traces of alcohol and your blood tested for more advanced intoxicants. And yet, a few hours ago, that is exactly what the company unveiled. 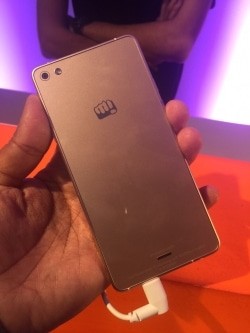 The Canvas Sliver 5 which was launched today by Micromax, is relatively modest specced by recent standards – a 4.8 inch 720p display, Qualcomm Snapdragon 410 processor, 2 GB RAM, 16 GB storage (non expandable), an 8.0-megapixel rear camera and a 5.0-megapixel front facing one, and a single SIM slot that supports 4G. And yet it comes at a price of Rs 17,999, which is more than that of the vastly superior specced Xiaomi Mi 4i, Xiaomi Mi 4 (since yesterday’s price cut) and Nubia Z9 Mini and is close to what the likes of the Asus ZenFone 2, Lenovo Vibe X2 and Huawei Honor 6 command. “It is the specs of the Yuphoria, at a price that is greater than that of the Yuphoria and Yureka put together” snarled one of our colleagues, shaking his head in disbelief at the price.

Vineet Taneja, however, is reasonably confident that the device justifies its price tag, citing two factors that have been considered the Achilles Heels of the company in the past – design and after sales service. The Canvas Sliver 5 is being called the world’s thinnest phone ‘from end to end’ – a term that stresses the fact that it 5.1 mm thin all along with no bumps to disrupt the thickness. Never one to pull his punches, Taneja demonstrated the thinness of the device in comparison to competitors by dropping different phones from a slot that he claimed was exactly 5.1 mm thin – all the other phones got stuck in it, but the Sliver 5 went right through. He also stressed the quality of the materials – aero quality aluminum and Corning Gorilla Glass – which he insisted made the device a design wonder. When asked later if the consumer would pay a premium for the design, he insisted they would. “Our best selling devices – the Spark, the Unite – have sold on design. There were better specced devices at the same price point, but it was ours that were sold,” he pointed out. “It is never purely about specs or purely about design, but in some devices, the design occupies centrestage. The Sliver is one of them.”

And then there was the little matter of after sales service. The Micromax CEO said that the Sliver would come with a warranty which would see defective phones being picked up from the user and returned in working condition within seven days. It was a remark that led to heads being shaken in disbelief – Micromax’s after sales service has been known more for its absence than excellence. But Taneja feels that the time has come for the company to turn the corner in this regard. “The seven day mark is our way of putting pressure on ourselves,” he said later. “This is something we have to achieve. It is not optional.”

The Canvas Sliver 5 therefore represents a new side of Micromax – one that is not fighting purely on price (in fact, is not fighting on price at all), but is instead relying on an attractive design and excellent after sales service. Incidentally, those are two of the three pillars of what Taneja says is Micromax’s strategy for the coming days – performance is the third.

In many ways, the Canvas Sliver 5 is a gambit by Micromax – it sees the company step away from its “lower than others price” strategy and is an attempt to show that it can not just deliver premium quality, but also charge for it – small wonder brand ambassador Hugh Jackman will be starring in the ad campaign for the product, stressing its ‘premiumness.’ The coming days will prove whether this is just a one-off or the start of a new era for the brand. Can the Canvas be Premium? Stay tuned for our review.

Was this article helpful?
YesNo
TechPP is supported by our audience. We may earn affiliate commissions from buying links on this site.
Read Next
With Football Manager 2023 Touch, Apple Arcade finally has its “killer ...
#Canvas 5 #Canvas Sliver 5 #micromax #Opinion