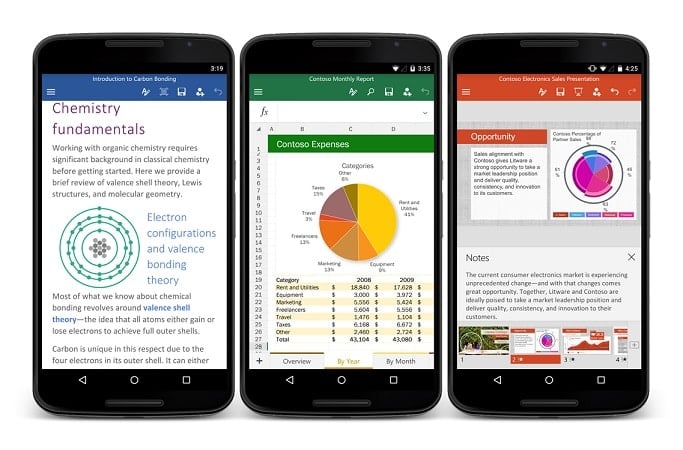 The single drawback with the new apps is that they will run on a device which has at least 1GB of RAM and which is fueled by at least Android 4.4 KitKat. There are actually quite many out there who don’t meet this requirement, so it’s a shame that they won’t be able to enjoy Microsoft’s iconic apps.

The apps will replace the older Office Mobile and, of course, are free to use. You simply need a Microsoft account to be able to use them, and there are some extra features that you can unlock with an Office 365 subscription. Furthermore, while now users need to download them from the Play Store, it seems that they will be pre-installed later this year on certain devices from over 30 OEMs, such as Samsung, LG, Sony, and others.

If you live in China, you can get the apps from such alternative app stores as Tencent, Baidu, Xiaomi, CMCC, as well as the Samsung Galaxy Store. Among the most recent features, Office for Android phone apps can now connect to third-party storage services including Google Drive and Box.

Was this article helpful?
YesNo
TechPP is supported by our audience. We may earn affiliate commissions from buying links on this site.
Read Next
How to Use Android Phone as Webcam for PC
#android #microsoft-office