After months of waiting, speculation and an “unsettled” despair, the OnePlus 2 has been announced. It has been one of the most awaited product launches of the year, thanks to the ultra successful predecessor and a promise from OnePlus to delight the consumers with an uber powerful phone at an affordable price. The best part of the deal is the fact that OnePlus 2 is almost priced at par with its predecessor at $329 for the 16GB and $389 for the 64GB variant. OnePlus 2 was subjected to several leaks including one which showed the phone clad in rather ugly design. The latest round of leaked pictures soothed our nerves as it showed off a rather beautifully chiseled out phone.

OnePlus 2 is powered by the rather infamous Snapdragon 810 SoC tagged with a staggering 4GB of RAM. The display shapes out in the form of 5.5-inch-1080p display and it is good to see that the company didn’t run after the 2K display which as of now is still an overkill when you consider the impact on the battery life. The company claims that OnePlus 2 comes with a highly adaptable display which is also the brightest display in the market. It also lets users see the things clearly in the bright sunlight, akin to the Nokia’s ClearBlack screen.

The phone has received a balanced cosmetic overhaul, the magnesium aluminium alloy strip running across the phone renders a great contrast to the sandstone texture. The most obvious change in the front facade is the presence of a physical home button which doubles up as a fingerprint scanner. The company claims that the fingerprint scanner is faster than the one in iPhone 6 and can store up to five users prints.

OnePlus 2 looks neat and almost picture perfect as the company has done away with logos and any other markings on the front of the phone. The device sports a iPhone style alert slider, which in essence is actually a toggle to jump from normal mode to silent mode and this can obviously be customized. The metallic chassis imparts the much needed premiumness to the device and so does the well proportioned volume rocker and power buttons.

OnePlus 2 comes with four StyleSwap Covers including Bamboo, Black Apricot, Rosewood and Kevlar. USB Type-C port is yet another highlight of OnePlus 2 and lets users plug in the charger both the ways and also offers better speeds. One connectivity option which is missing is the NFC, which is rather surprising. The phone does come with Dual-SIM (both nano SIM) Dual-4G support. 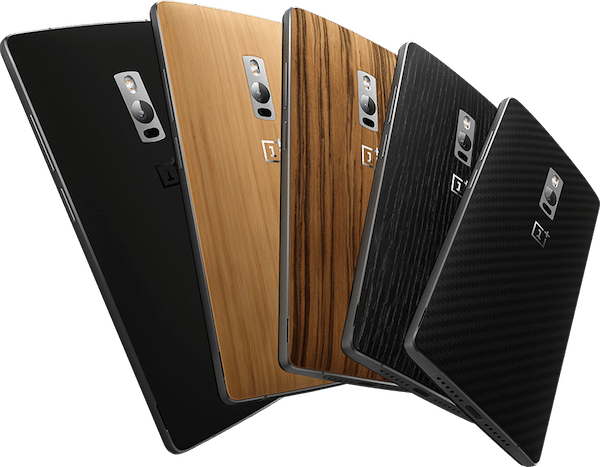 OnePlus 2 comes with an improvised 13-megapixel primary sensor along with a dual LED flash. The primary camera camera is fitted with a 1.3 micron sensor which facilitates more light and helps in capturing well ventilated pictures. The OIS and Laser focus will come a long way when it comes to making the OnePlus 2 a phone with a great camera. The front facing camera is a 5MP affair. The new camera app from the Oxygen OS seems to be minimalistic and uncluttered yet it has all the quintessential toggles built in and is capable of capturing images at a resolution of 50-Megapixel.

OnePlus is touting its new reservation system that will help buyers keep a tab on their turn. OnePlus 2 will go on sale in countries including India, USA, China and Canada on 11th of August.