With 3D Touch, Apple Faces its Biggest Interface Challenge Yet

A member of the Lenovo ThinkPad once told me that with every great innovation comes a new headache: that of convincing the consumer that it actually was worth trying out. In this case, the gentlemam was referring to the iconic red trackball on the ThinkPad, which many customers he claimed found odd to use and weirdly placed on their keyboards.”They kept saying the normal keyboard direction keys or a mouse was good enough,” he said, with a weary shrug.

With the introduction of 3D touch (or Force Touch, as some term it) on its new iPhone 6S and 6S Plus, Apple finds itself in a similar position. For the first time since the iPhone was launched way back in 2007, the company has dared to fundamentally alter the way in which you interact with the device. In fact, this would be the first time that a new pair of iPhone would have a surface that is radically different from its predecessors.

And therein lies the big challenge that Apple faces – one of interface. Interestingly, the iPhone became a cult hit mainly because of its interface which was radically different from that of other (Palm OS and Windows Mobile) phones. Apple had by and large steered clear of messing with the basic iOS interface – stuff like pinch to zoom, drag and drop, and cut and paste have been pretty standard for a while now. Everything was limitted to tapping and swiping on the screen.

3D touch adds a new element to that – long pressing. In essence, it is a bit like a right mouse click, as it discloses additional information by long pressing an item. And it involves dual levels of long press. Apple calls them ‘peek’ and ‘pop’. Long press lets you peek into an item and deeper press lets you pop into it to interact further. For instance, in the case of an email, a long press will let you read an email without actually opening it, while a longer press will take you right into it. This is the first time that a new iPhone has a core interface element that its predecessors lacked (unless you wish to count Siri and fingerprint recognition as core interface elements). And rather challengingly, unlike a rather basic pinch to zoom or a tap or swipe, a long press is not exactly an intuitive gesture. In fact, pressing down on a screen is often not recommended as it might damage the display. Hard presses of the screen were ironically popular in the resistive screen era when one really had to jab a touchscreen to make it respond – an era which the iPhone ended. 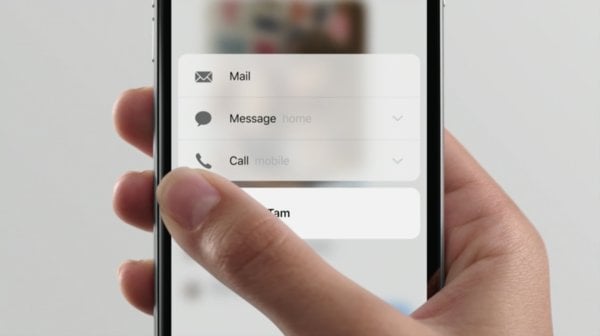 It is new, it is a bit unusual and it is not exactly super intuitive – heck, even talking to Siri feels more natural than pressing down on a display (it took me some time to get used to pressing down the display of the Apple Watch). Which is why we think that 3D touch is not just the biggest interface innovation that Apple has made to the iPhone since its inception, but also perhaps the biggest interface challenge it has faced in that time. Yes, we have no doubt that people will get used to it over time but the longer it takes, the wider it pushes the door open for the competition, which has a more “normal” touch experience to offer (as many Android players can testify, interface innovations like gestures have not exactly been a rage). As always, a lot is going to depend upon the app developer community and how it leverages this feature. But even excellent apps that leverage 3D touch will not change the fact that for a while at least, the iOS community is going to be split between those who can long press their displays and those who cannot – incidentally, there was no sign of 3D touch on the new iPad Pro. It is a rare shade of fragmentation and just a hint of complexity in an OS that prides itself on consistency and simplicity across platforms.

Will 3D touch be a masterstroke? Or a nuisance? Only time will tell. We have a feeling that in the short run, it will be a bit of a mix of both. But it is going to be fascinating to see how Apple encourages developers and consumers alike to try it. And whether Android tries to adopt it or steer a different path well clear of it.
Every innovation does come with its share of headaches. For manufacturers and consumers alike.