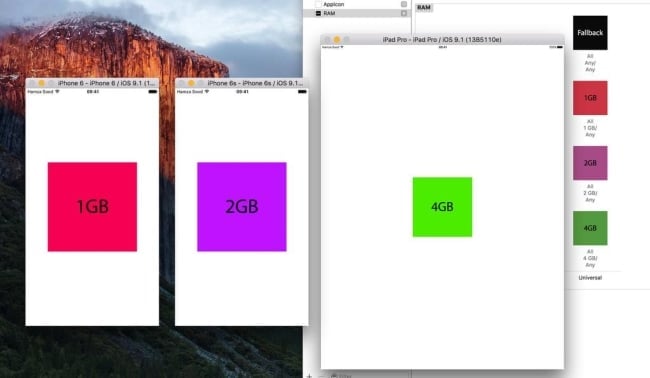 RAM has always been quintessential when it comes to managing multitasking and fluidity of the user interface. Although Apple devices have been blessed with a superior memory management system, thanks to the iOS, the need to upgrade the RAM was long overdue. Surprisingly, Apple has been sticking to the 1GB RAM since the iPhone 5 which is four iterations older and was launched three years ago.

Earlier, an Adobe release had jumped the guns and pointed out at a 4GB RAM on the iPad Pro in a press release. Since the iPad Pro has been devised to take care of multitasking and using high end graphic intensive applications, it sure made sense for Apple to go for the doubled up (as compared to iPad Air 2) 4GB RAM and the fact that the iPad can now even edit multiple 4K videos in the latest version of iMovie will make sure the device harnesses the new RAM.

Asset Catalogs are used to simplify management of images that are used by your app as part of its interface, it can include App icons, image sets, launch images and other elements needed to build an app. Sood has leveraged the fact that asset loading with respect to memory capacity of devices can be seen, thus deciphering the undisclosed RAM capacities.

Both the iPad Pro and the iPhone 6s are available for preorder.

Was this article helpful?
YesNo
Source: 9to5 Mac

TechPP is supported by our audience. We may earn affiliate commissions from buying links on this site.
Read Next
Two 2020 iPad Pro models with triple rear cameras hint at increased focus on AR
#Apple iPad Pro #iphone 6s #iphone 6s plus