Although the iPad started out very much as the ‘third screen’ (alongside a smartphone and a notebook) that was mainly about content consumption, it has recently been morphing into a that can also step into the productive shoes of its MacBook bros. And a basic necessity for tablets with notebook wannabe aspirations is multitasking chops. 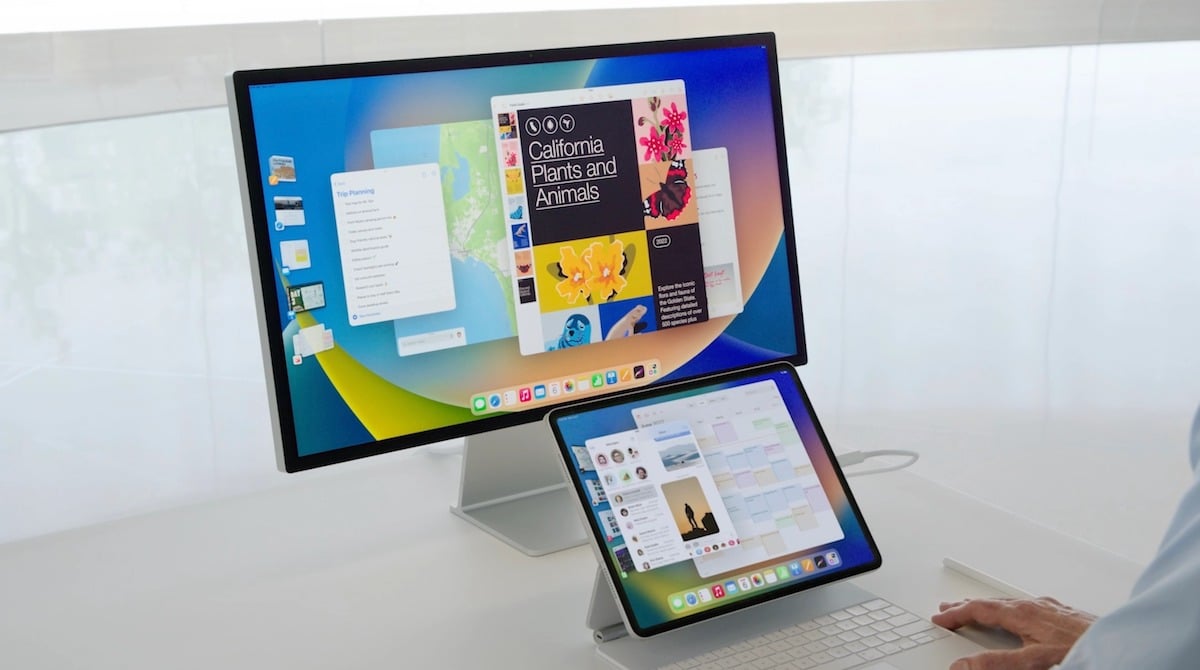 Now, the iPad does have multitasking and lets you work on apps in split screen mode, but the solution is not as simple as on a notebook. This is why when Apple revealed iPadOS 16 in June this year, one feature caught everyone’s imagination – Stage Manager.

If you are looking for Apple products, Latest Deals is the place to go. Their website publishes daily new deals from the most important retailers in the UK and the world. You will be able to find quality products at a discounted price. Save money and take home a bargain!

This was Apple’s take on multitasking, not just on the iPad but also on the macOS, which powers Apple’s notebooks and desktops. It was very different from anything we had seen before and was hailed by many as perhaps the most innovative software feature from Apple this year.

After several beta releases, Stage Manager is now available for iPad as well as MacBook Air and Pro, iMac, and Mac Mini users. While it has its critics, Stage Manager definitely puts a new spin on running multiple apps and is definitely a feature that should be tried out. You might not spot it immediately because it is not activated by default. That is exactly what we are going to show you.

Stage Manager: Which devices can run it? (hint: no, it’s not just about the software)

Before you get going, check if you have a device capable of running Stage Manager. No, the feature itself does not cost anything, but while the best things in the software life might be free, they do not always run on all devices. So while you might be very interested in taking Stage Manager for a Mac or iPad spin, your device might not actually be capable of running it.

Things, however, get complicated on the iPad front. First off, Stage Manager will run only on iPads that have been updated to iPadOS 16 (also released recently). But even that is not enough in itself. Only the following iPads with iPadOS 16 will be able to run Stage Manager:

None of the suffix-less iPads (the base models) or the iPad minis will be able to run Stage Manager. If you think that this is a small list, then consider the fact that when it was first announced, the feature was supposed to work only on iPads with Apple’s M1 processor. The list was expanded to include some older iPad Pros later on, albeit with some restrictions (but that is another story, literally).

How to activate Stage Manager on MacBook Pro/Air, Mac mini, and the iMac

If your macOS device is capable of running Stage Manager (if it is running macOS Ventura), these are the steps you need to follow to get on Stage Manager: 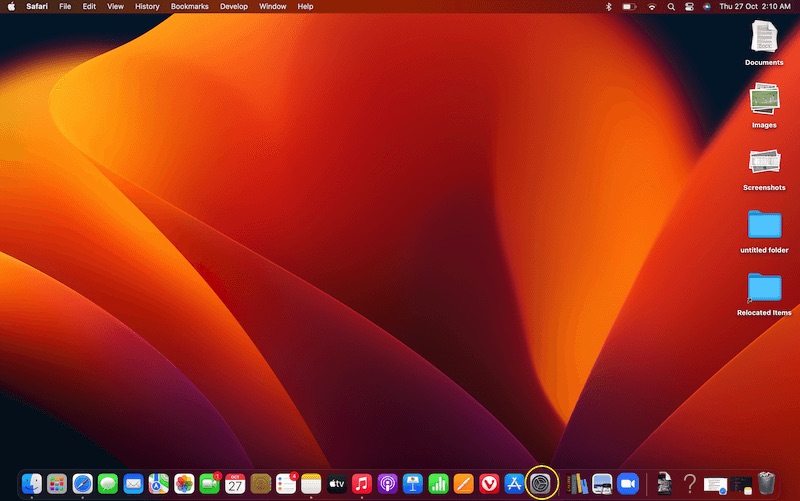 macOS Ventura has a new name for the well-known System Preferences – System Settings. And this is where we start our journey to activate Stage Manager.

Step 2: Getting to the Center of Control 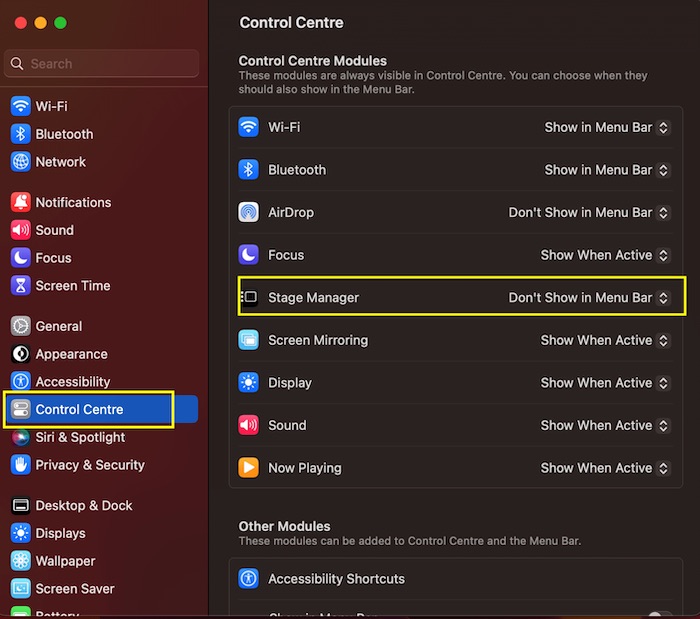 In System Settings, head to Control Center. When you select this option, you will see on the right Stage Manager, but set to Don’t Show in Menu Bar by default. It would be best if you changed it to Show in Menu Bar.

Now that we have placed Stage Manager right in the Menu Bar, simply head to the Menu Bar (top right corner of the macOS desktop), click on the Control Center icon there (the one that looks like an ‘equal to sign). You will see the Stage Manager option. Go ahead and select it.

Step 4: The Stage is yours; manage it 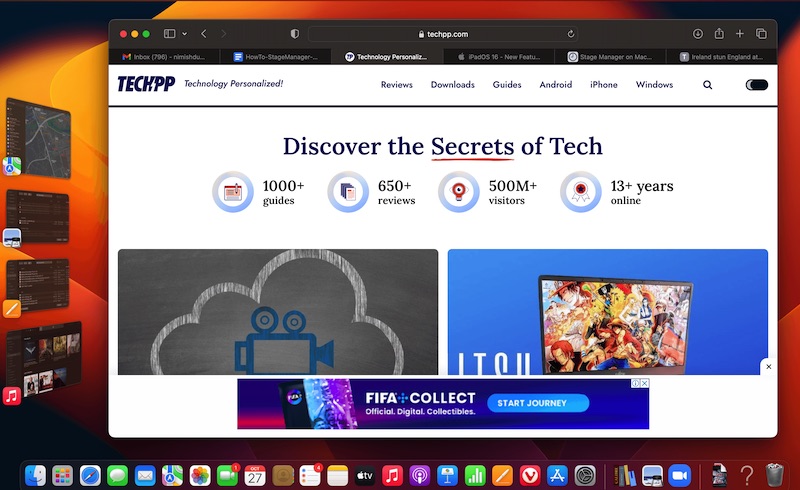 The moment you activate Stage Manager, you will see the app you are currently running appear in the middle of the display, with other open apps arranged in a column to its left. You are in Stage Manager mode now. Just click on an app to bring it to the center and relegate the current one to the side. To turn off the feature, head right back to the Control Center in the Menu Bar and tap on Stage Manager!

How to use Stage Manager on supported iPads

Activating and using Stage Manager on the iPad is slightly more complex. If you have an iPad that supports this feature, here is how you can start using it:

Step 1: It is all in the Settings 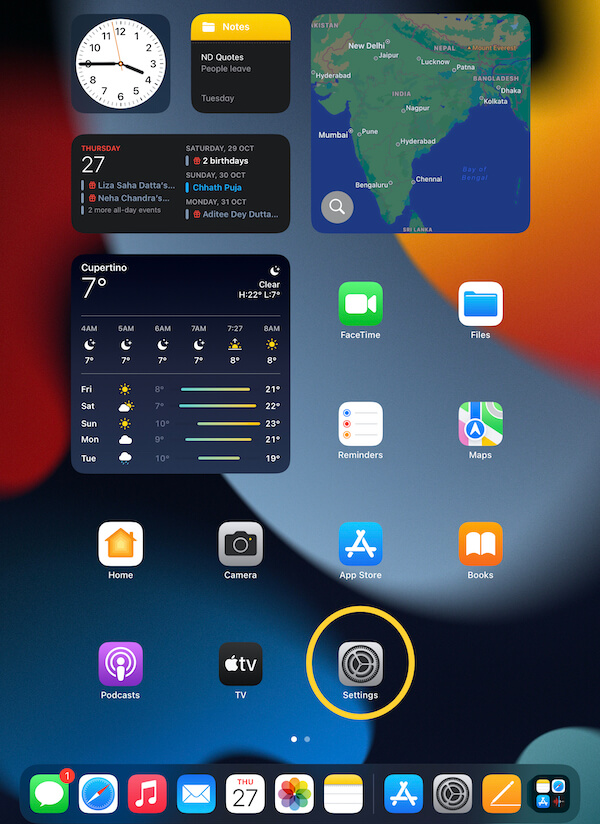 You start off at a very familiar place – the good old Settings, where many a feature activation lies. No, its name has not been changed. It is still Settings. 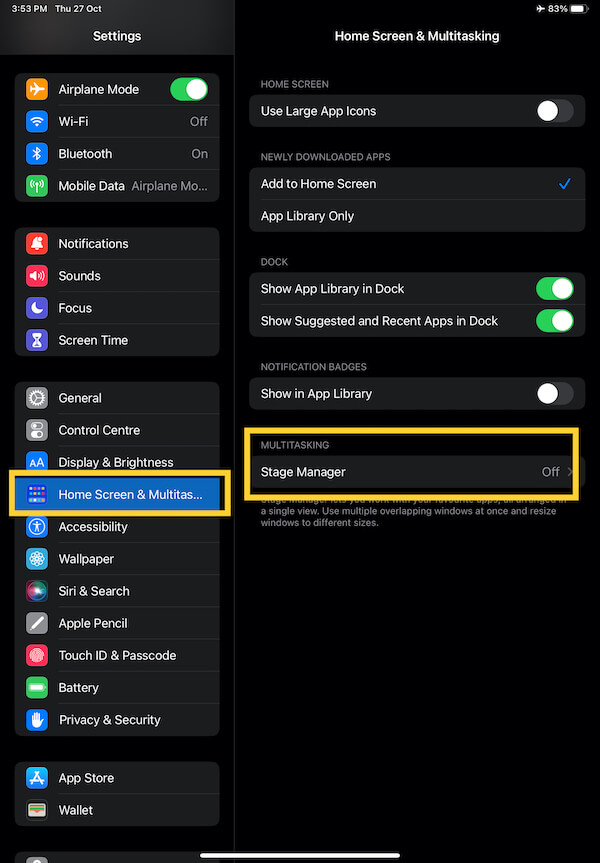 Once in Settings, scroll down until you reach the Home Screen and Multitasking section. The moment you select it, you will see the options available in this section on the right of the display. We are looking for the one at the end – Stage Manager. It will be switched off by default. Just tap it to switch it on.

Step 3: Work out what you want to see 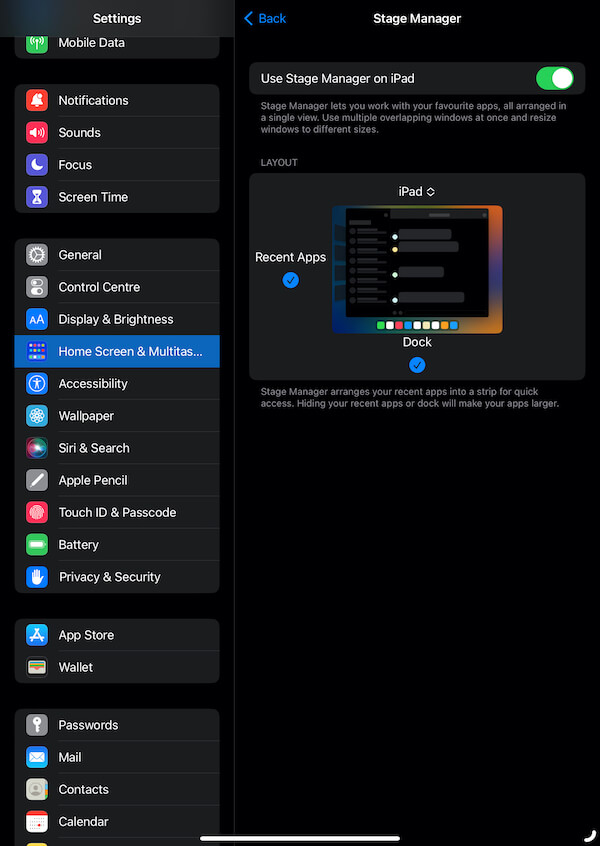 When you switch on Stage Manager, you will be taken to another screen that lets you control how you wish to see multiple apps. You can opt to tell Stage Manager not to show Recent Apps on the left of the currently open app and/or the app dock below it. Both are ticked to be displayed by default, and we suggest letting this be. 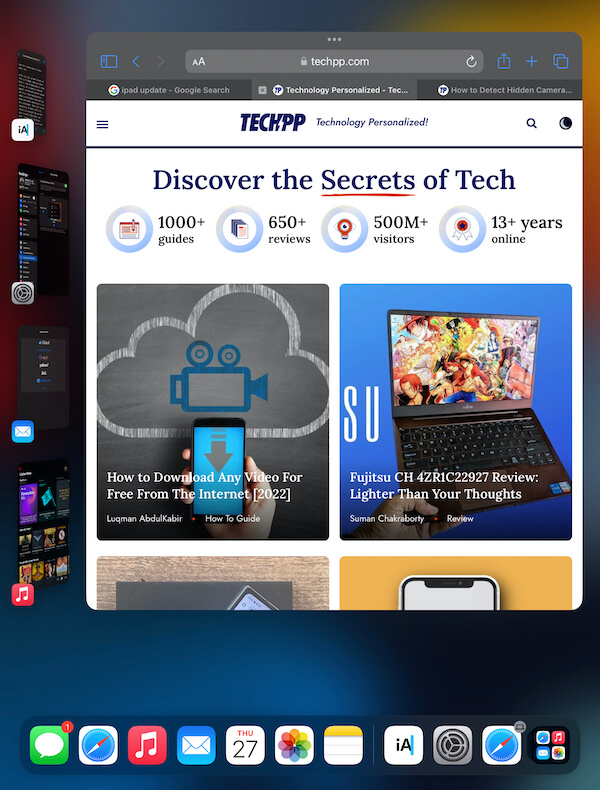 That’s all it takes. Whichever app you open should now take the central portion of the display, and you will be able to see your recent apps on the left of the main app. Tap on any of them to bring them to the center.

Note:
If you cannot see recent apps on the left, swipe in gently from the left of the display, and the recent apps will appear.

Or go to Control Center!

If you are reasonably familiar with Stage Manager, you can also invoke it from the Control Center on your iPad. Swipe down from the top right corner to access Control Center, and you will see Stage Manager as one of the options available. Tap on it to activate it.

And – some might miss this (which is why we explained the Settings method first) – long press on the activated Stage Manager icon to get the option of whether you wish to see recent apps and/or the app dock below it.

That’s all you need to get started with Stage Manager on Mac devices and the iPad. Go ahead and experience Apple’s new multitasking vision.

Was this article helpful?
YesNo
TechPP is supported by our audience. We may earn affiliate commissions from buying links on this site.
Read Next
How to Request Read Receipts in Microsoft Outlook
#how to guide #iPadOS #ipados 16 #Stage Manager