Financially, the recent times have been good for Apple. The company has captured greater than 95% of the smartphone industry’s profits. China has been doing well despite economic slow down in the country. Revenues and profits have been increasing Y-o-Y for the past three quarters. Every quarter in the FY2015 right from FY Q1 2015 to FY Q4 2015 has seen revenue/profit growth on a Y-o-Y basis.

Despite all the good stuff, one recurring theme in Apple’s financials is that the iPhone is now taking a larger share of Apple’s revenues and profits than ever before as seen in the graphs below.

With new product lines such as the Apple Watch, iPad Pro, Apple TV and new services such as Apple Music, Apple is attempting at diversifying its revenue/profit streams and reduce its dependency on the iPhone. But the iPhone’s clout and weight is such that it would take many years before any particular product line or a group of product lines/services become as relevant as the iPhone.

The Plus models were the phablet sized iPhones that had a bigger screen, a larger battery and slightly better camera which convinced users to pay the extra $100. The fact that 16GB was the base model and after that storage directly jumped to 64GB, made several people want the 64GB model because for just $100 extra, the jump in memory was four times. Given the amount of apps and data people store in their smartphones these days, buying a 16GB version wouldn’t be sufficient for most.

The two ASP increasing tactics worked well as seen in the graphs below. 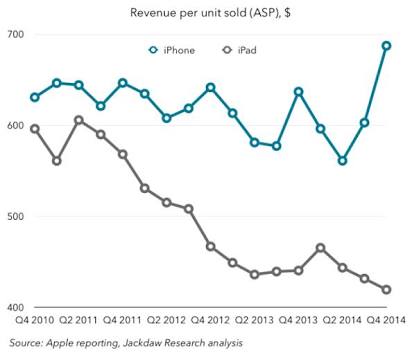 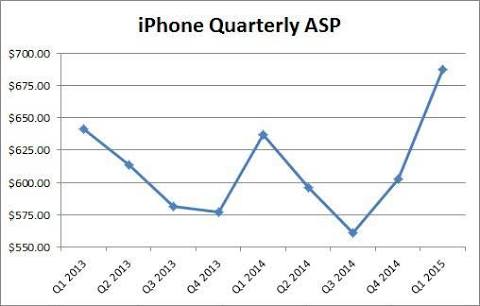 Volume or units sold is one of the most important metrics that determines the health of the iPhone segment. The graph below shows how Apple despite competing only in the premium smartphone segment has always been growing. 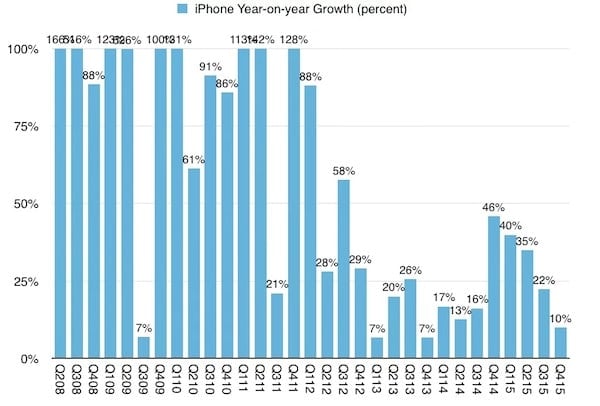 2013 and 2014 were quite dull for Apple in terms of growth on a Y-o-Y basis compared to other years. 2015 has been better than 2013/14 thanks to the launch of the big screen iPhone 6/6s Plus which opened the flood gates in China and drove record shipment as well profit growth. Apple recorded the highest profit in Q1 2015 primarily because of the launch of iPhone 6/6 Plus and its splendid performance.

Tim Cook has done a pretty good job at making sure Apple’s financially strong than it has ever been before. The first move was to increase the ASP as mentioned above. The second move was to embrace China by striking a partnership with China Mobile and deliver the world a much needed Apple phablet. The increase in ASP and embrace of China plus phablets has helped Apple acheive some really great financial performance all througout the year.

However, there is a general consensus that Apple’s success might end up being too heavy for Apple themselves. Morgan Stanley has said that next year Apple might face its first Y-o-Y sales decline. There’s been a lot of chatter about this recently and for valid reasons.

At the end of the day, it’s all about revenue and profits which primarily depend on ASP and volume. Apple has already exhausted all the indirect means of growing ASP of the iPhone i.e by launching a phablet/Plus model and by making the base storage very low. After these moves, if Apple has to further improve the ASP of the iPhone, it would have to directly increase the sticker price which is not expected.

In fact the ASP of the iPhone might actually erode a little in 2016 mainly because of two reasons. The first being extensive price cuts in India, in fact iPhone 5S is the cheapest in India as of now. I expect reduced iPhone prices in India even next year. Secondly, the purported launch of iPhone 6C which again by the virtue of being a mid range device would pull down the overall ASP.

Now that it’s clear that the ASP is under pressure and will at best remain stable. Therefore the only way for Apple to grow its profits would be to improve its volume. But even in terms of volume there are concerns that almost all of Apple’s dominant markets such as US, Europe, Japan and China are now facing either saturated or declining smartphone shipments making it even difficult for Apple to grow.

However it would be incorrect to say that Apple would face reduced smartphone shipments next year. Even though most of the markets are facing either stable to reducing smartphone shipments, Apple has been able to convert a lot of Android users in these countries. During Q4 2015, Tim Cook said that 30% of new iPhone owners were Android converts. I expect this trend to play out in 2016 as well. Also Apple hasn’t had almost two-thirds of its installed base on an iPhone 6/6 Plus/6S/6S Plus or basically any of the bigger screen models.

The 30% conversion rate and the two-thirds of users who haven’t owned an iPhone 6/6 Plus/6S/6S Plus should help Apple during Q2 2016 and Q3 2016 when there would be no new iPhone launches. However after Q3 2016, the situation for iPhone seems much better i.e from Q4 2016 onwards for the following reasons- 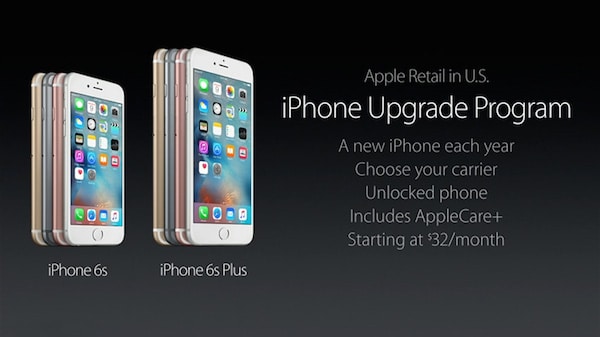 Starting with iPhone 6S and iPhone 6S Plus, Apple introduced the iPhone upgrade program. Here, by paying a fixed amount every month, the users can upgrade their iPhone once every year. So once the iPhone 7 launches in Q4 2016, a person who bought the iPhone 6S under the iPhone upgrade program can trade their iPhone 6S for an iPhone 7 at no extra cost. Similarly, telecom operators Sprint and T-Mobile have leasing options in the US starting with iPhone 6S which allows users to upgrade to the latest iPhone 7 once it releases at no extra cost by returning their previous iPhone 6S. Apart from that, users who are on 12 months Equipment Installment plans would also be eligible for an upgrade.

All the above mentioned factors should once again make Q4 2016 a wonderful quarter for Apple given the avenues where upgrades can come from compared to earlier where there was the standard two year contract. It’s important to mention that Equipmemt Installment Plans can also have a reverse effect by making people want to hold onto their phones longer but the leasing programs and the iPhone upgrade program should have a net positive effect.

After China and US, India is the third largest smartphone market and might soon overtake US as well. Although Apple is firmly entrenched in both US as well as China, the same is not the case with India. In India, Apple still holds a pretty miniscule share of around 0.9% but 2016 can be the year when this changes particularly because of two reasons.

Apple has been trying to gain market share in India. In fact the Cupertino based giant has recently slashed the price of iPhone 5S to make it a proper mid range contender as it now retails for around 22k or lower on various e-commerce websites. On the low end, Apple has the iPhone 4S which is retailing for around 12-14k on various e-commerce websites.

Apple has finally been able to get the prices right for the Indian masses but the problem is the handsets in these price brackets are still outgunned by their Android counterparts in terms of stuff like camera, display, performance etc.

Next year, if Apple manages to reduce the price of iPhone 5S to 12-14k and iPhone 6 to around 22-25k, they could have the right devices at right price point and potentially a winning recipe. The iPhone 5S already supports Indian LTE bands, apart from that the A7 chipset can still hold against Android smartphones launching in the 10-15k price segement that would come with low end Qualcomm or Mediatek chipsets. iPhone 5S will have the latest software version next year and A7 is also a 64-bit chip. Only problem with iPhone 5S would be the internal storage and slightly smaller screen at 4 inches but in return one could get the Apple brand and access to the coveted ios ecosystem. In particular, if Apple’s iPhone 5S does indeed come down to the level of 10-15k, it can be a great contender to Samsung’s future J series of smartphones that have done pretty well.

Similarly in case of iPhone 6, if it’s priced at 20-23k next year, Apple would have a mid range phablet to compete with the likes of Samsung’s Galaxy A series of smartphones. The iPhone 6 again with its A8 processor would be no slouch. Plus the presence of LTE, a relatively big screen and a decent battery life should make its value propotion even better. Only downside to something like iPhone 6 is the year when it launched and the RAM, otherwise an iPhone 6 at 20-23k is a very serious contestant to any branded Android smartphone out there at the same price range of 20-23k next year.

If the iPhone 5s ends up being priced between 11-13k next year and iPhone 6 at 20-23k, then Apple could very well gain a lot of market share in India with the proper amount of marketing and distribution.

While Q2 2016 and Q3 2016 might be little dull for Apple, the story from Q4 2016 is very bright again. The iPhone upgrade program, leasing programs and EIPs should help iPhone register better sales than ever in Q4 2016. Similarly the price revision that should come for iPhone 5S and iPhone 6 in Q4 2016 could very well make India Apple’s next China.

Was this article helpful?
YesNo
TechPP is supported by our audience. We may earn affiliate commissions from buying links on this site.
Read Next
Alert! You’re Hiding Sensitive Information From Your Images on iPhone W...
#2016 #analysis #apple