Disney has been mostly known for its Animation business, but now it seems that the company has developed a new interest of making robots. The VertiGo is a small robot car which can climb walls and drive on them. Disney’s research arm has been producing some great and equally crazy stuff, and the latest one seems to be this four wheeled creeper robot. 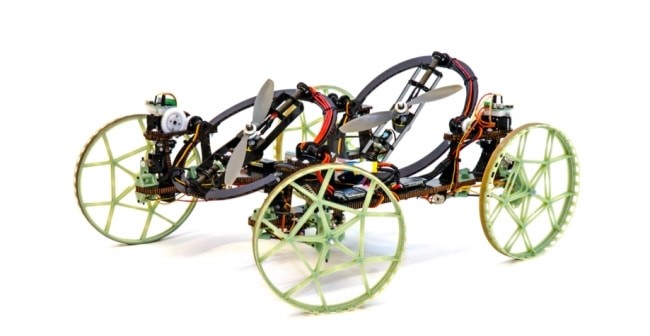 Result of a partnership between Disney Research Zurich and the university ETH Zurich, VertiGo is capable of rolling up on the wall by using the two propellers attached to it. This will allow the robot to move on walls and other vertical surfaces at a fascinating pace. The researcher responsible for the VertiGo said that

By transitioning from the ground to a wall and back again, VertiGo extends the ability of robots to travel through urban and indoor environments, the robot is able to move on a wall quickly and with agility.

The demo of the Robot impressed us. It looked like an agile little bug that can drive its way through any kind of inclination. The VertiGo is fitted with two set of wheels the one in the front is steerable and the propellers come with two degree of freedom. Now for all this movement it is but evident that the Robot must be light enough and needless to say the weight has been capped by making use of a central carbon fibre baseplate and carbon rods for the mechanism. The movement of the thrusters is aided by the independent servo motors and surprisingly the robot comes fitted with a double wishbone suspension something that we are used to seeing on modern cars.

The entire movement of the vehicle is enforced by the eight individually controlled actuators and an on-board computer. The data is pulled from the 6-axis IMU in the centre of the robot and the distance ahead is calculated using the infra-red distance sensors at the front. Based on all the inputs the controller devises the most optimum positions for the actuators, thus achieving the user input.

TechPP is supported by our audience. We may earn affiliate commissions from buying links on this site.
Read Next
Disney+ Streaming Service: 18 Things you need to know
#Disney #Robotics #VertiGo