After teasing it a couple of days ago, Xiaomi has launched the third iteration of Redmi series in the form of Redmi 3. The new phone sports a major hardware upgrade and it also comes clad in a metallic body which looks similar to the Redmi Note 3. In all likelihood, the Redmi 3 might be the first Xiaomi device to be introduced in the Indian market this year. 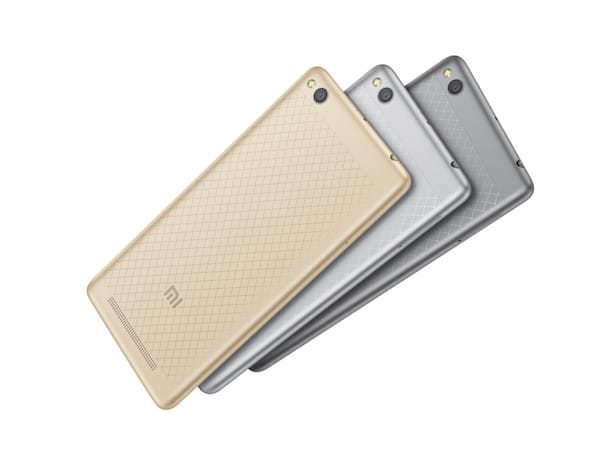 The Redmi 3 is fitted with a 5-inch HD display as opposed to the 4.7-inch in its predecessor and it is powered by the more powerful Snapdragon 616 Octa core chipset which is paired to 2GB of RAM. On the storage front, the phone offers 16GB of on board storage along with a microSD card slot that can accommodate another 128GB.

Redmi 3, unlike other entry level Android handsets looks plush, thanks to the full body metal construction and also the engraved plaid design pattern on the back panel. Visually, the fit and finish seems to be top notch and hopefully the device will reflect the same when we try it out.

The imaging department has also received major updates and the 8-Megapixel primary sensor is now bumped up to 13-Megapixel sensor with PDAF while the secondary sensor shapes up in the form of 5-Megapixel unit. Unlike the Redmi 2, the Redmi 3 comes with a Hybrid SIM card slot and supports 4G LTE on both the SIM cards.

The best part of the deal is the 4100mAh battery pack that Xiaomi has bundled with the Redmi 3 which is ironically the same battery pack powering the Redmi Note 3. As expected on the software front, the Redmi 3 runs Android Lollipop flavored with MIUI 7.

Redmi 3 is currently priced at 699 Yuan ($106) and will be available in China (on Mi.com) starting from January 12. Xiaomi has been lately lying low when it comes to launches in the Indian market and we hope that the Chinese manufacturer introduce the Redmi 3 here as well as it commands a great value for money proposition.

TechPP is supported by our audience. We may earn affiliate commissions from buying links on this site.
Read Next
With Redmi A1, is Xiaomi Resurrecting the Android One Dream, but Without Google?
#Redmi 3 #Redmi Note 3 #xiaomi