Before we get underway, let me first answer the question that a lot of people asked me when I announced that I would be using the just-released (in India, at least – oh we are so the tech super power that gets devices late… but THAT is another story for another day) Microsoft Surface Pro 4 as my main notebook for five days, just as I did the iPad Pro for the iPad Pro diaries. Now, the question that many have brought up – and very validly in my opinion – is that doing something like that with the iPad Pro made sense because it was not supposed to be a notebook but could do some of a notebook’s tasks provided one got the keyboard cover. So yes, it was not-a-notebook trying to do what a notebook did. So seeing if one could get through five days just using it and not a “regular” notebook made sense. 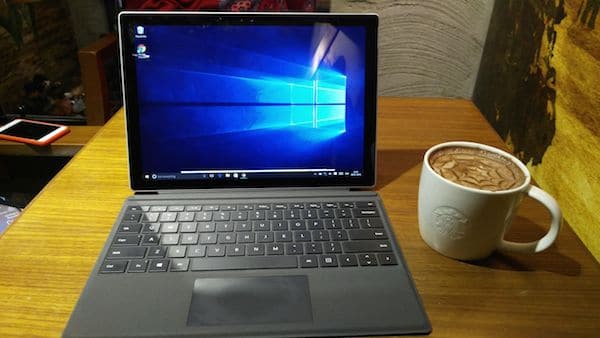 But the Surface Pro 4 is a very contrary beast. Yes, it is sold mainly in tablet form (Microsoft executives kept referring to it as a ‘tablet’ throughout the launch) and the bundling of the Surface Pen only adds to the “tablet-ness”, but unlike the iPad Pro, with which so many compare it, it runs a full-fledged desktop OS, Windows 10. Pair
it with the Type Keyboard Cover to which it attaches magnetically, and it becomes pretty much a standard Windows notebook, complete with a proper USB port (“the reason we could not make it any slimmer is that we refused to compromise on the USB port,” Vineet Durani, director – Windows Business Group, Microsoft, told us at the launch), memory card slot, and even a mini display port.

So while the iPad Pro even with a keyboard and stylus was a tablet trying to step in for a notebook, the Surface Pro 4 with those two accessories IS pretty much the real thing. And it is heftily specced too – we got the base model, but even that packs in a 12.3-inch display with a 2736 x 1824 resolution (267 ppi pixel density – staggering at that display size, as you will be watching from a greater distance than you would see a phone), an Intel Core i5 processor, 4GB RAM, 128 GB storage, 8.0-megapixel rear camera and 5.0-megapixel front facing camera, as well as Wi-Fi, Bluetooth and well, USB connectivity.

So well, the question arises: being with the Surface Pro 4 is pretty much like being with a notebook, isn’t it? So what’s the big deal about using it for five days? You ARE using a Windows 10 device in all its glory, made by Microsoft itself. What’s the fuss about?

Well, the answer is not too easy to give. Yes, the Surface Pro 4 with a keyboard is a Windows notebook. And yet, it is pretty much like no other notebook out there. And we are not talking about the magnesium body or the kickstand at the back that allows you to tilt it at different angles. Nor even about the hardware – you can get better specced devices at lower than the Rs 89,990 price tag that has been slapped on this one. And no, it is not about how insanely light and compact the device is – even with the keyboard, it is barely above a kilogram – we have had lightweight devices from other companies before (hey, the ultrabook revolution is a few years old now).

No, what makes the Surface Pro 4 special is the fact that it is to Windows 10 what the Nexus is to Android. It is the gold standard in the eyes of many for Windows machines, because hey, Microsoft made it for the OS, keeping its requirements in mind. So the whole idea of spending five days with it is not to find out if it can step in for a regular notebook – hell, it IS a notebook – but to see how differently it performs from other notebooks that boast similar or better specs. To see if it carries a halo in the Windows crowd just as the Nexus does in Android folk – that of being the ‘pure’ one? 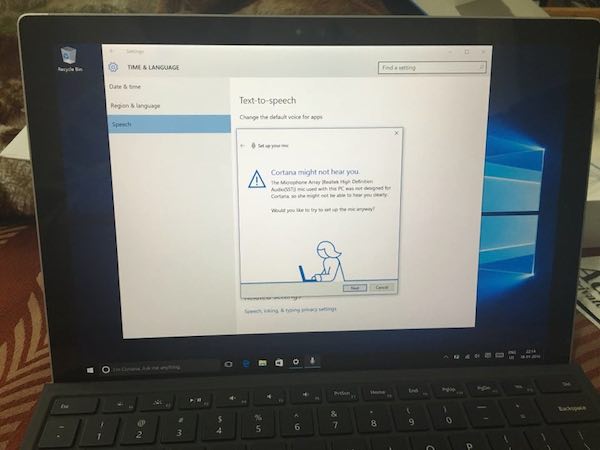 Let us get one thing straight, however – nothing had prepared us for just how amazingly compact the Surface Pro 4 was going to be. Even with the keyboard cover on it, it just seemed like a slightly large notebook (of the paper type!), and surprisingly lightweight (as a tablet, it is slightly heavier than the iPad Pro, while with a keyboard, slightly lighter – oh we know the irony!). No, it is not exactly as sleek and good looking in tablet form as the iPad Pro is – it has a more boxy look than Apple’s curvaceous large tablet, but that kickstand will make people look at it. And yes, we do need to add a word or two about the keyboard – it makes the one on the iPad Pro look almost obese. It has a proper row of function keys, is backlit (there is a key to adjust backlighting available on the keyboard) and in spite of being extremely slim, actually has plenty of ‘travel’ for each keystroke. One had to get used to the keyboard on the iPad Pro – no such issues here at all.

And setting it up was easy – even the Windows Hello feature that identifies you by your eyes took less than a minute to get going. But yes, we did get a surprise when, while setting up Cortana, the system informed us that “the Microphone array (Realtek High Definition Audio SST) mic used with this PC was not designed for Cortana, so she might not be able to hear you clearly.” Illogical, right? That said, we did set up Cortana and the coming days will reveal how well she works. There was no MS Office or Office 365 bundled with the device we got, so we just logged in using our Office 365 account and well, praise be, everything got running smoothly in no time at all. We also installed Chrome, because no matter how much we love the Edge browser, we have got used to our bookmarks and apps on Chrome. But yes, we will be using Edge more often for our tasks. The Surface Pro 4 does not have LTE connectivity in India, so we will be relying on Wi-Fi in public spaces and off our phones’ hotspots to keep us online. 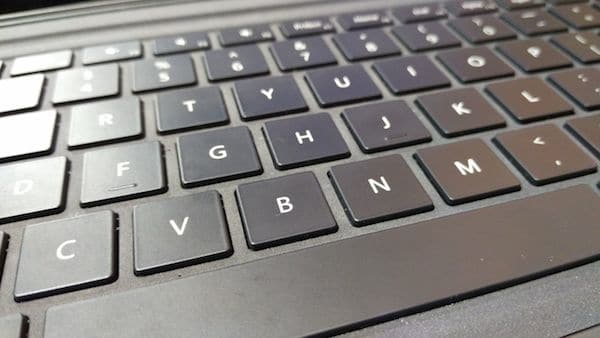 So we have the Surface Pro 4, we have a smart type keyboard and the Surface Pen all set up and ready. And day one has been relatively quiet with a lot of browsing and a bit of writing, thanks to a couple of events. Battery life seems impressive (about four hours of usage and we still have about 60 per cent left), but what we really love is the keyboard, which is fantastic for fast typing, and the brilliant display. And yes, we have had people asking us if the notebook we were using was the Surface (we preened and replied in the affirmative). Interestingly, however, we have NOT ONCE thought of using the device without the keyboard. Not on day one.

But hey, it is early days. Stay tuned for more.

Was this article helpful?
YesNo
TechPP is supported by our audience. We may earn affiliate commissions from buying links on this site.
#Surface Pro 4 #Surface Pro 4 Diaries