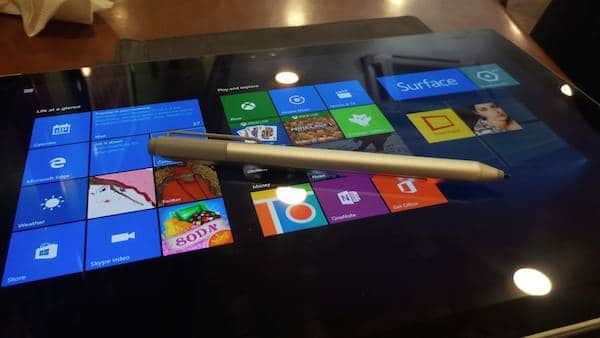 And well, in terms of sheer functionality, it certainly has the beating of the Apple Pencil that comes with the iPad Pro – it is designed in a pen like manner and comes with a clip that can be attached to the Type cover, or even to your shirt pocket, and has a nice solid feel to it. There is also no embarrassing recharging mechanism – it comes with an AAAA battery that does not need to be recharged and which Microsoft claims lasts well over a year. It has a small, sharpish tip and not the bulbous type of tip that come with some capacitive display styluses. On its top is a clickable tip, accenting the familiarity with real world pens.

Seen in terms of pure functionality, the Surface Pen goes toe to toe with the Apple Pencil and even scores over it in some crucial departments. Perhaps the most notable of these is the fact that unlike in the iPad Pro, one can actually scribble notes on the Surface Pro 4 and see them converted into typed text – and the handwriting recognition on Windows 10 is very good indeed. That apart, you can add notes to documents and PDFs, sketch and color, and well, there are a few tricks that are the Surface Pen’s very own: click the top once, and it brings up One Note, allowing you to quickly scribble a note; click it twice and you will get a screenshot along with One Note, allowing you to clip the bit you want and even add a note to it, if you wish; keep the top pressed and Cortana is launched. You want more? Our favorite stunt is simply reversing the pen and using the top like an eraser to delete our scribbles and sketches, so like those rubber-tipped pencils of our school days (some Microsoft execs even refer to the top button as the ‘eraser button’). That apart, the Pen pretty much acts as a pointing tool, allowing you to highlight and cut and paste content from documents, websites and the like, and invoking right mouse button menus with prolonged presses on pages. And well, this being Windows, you can customize those top button clicks to suit your needs, so if you want a long press to invoke an app rather than Cortana, go to the Surface app and do so.

Now, on paper, that is pretty much more than the Apple Pencil can do – that worthy has no handwriting recognition functionality, can summon up nothing with its clicks, and is even difficult to carry around, thanks to its utter inability to attach itself to anything iPad Pro! Note the ‘on paper’ in that last sentence, though. For, in spite of all its functionality, the Surface Pen seems a bit of an oddity in the Windows ecosystem. We had problems with its palm rejection ability – lines appeared out of nowhere and menus kept popping up even as we sketched and painted in the Fresh Paint app. And well, the handwriting recognition does work, but in a rather eccentric manner. When we wanted to convert our handwritten notes in MS Word, we found that the only way to do so was by exiting the ‘tablet’ mode (the mode we use when we disconnect the Type Cover and use the Surface purely as a tablet), and then choosing the onscreen keyboard and then choosing the pen as an input method, which allows us to scribble on a narrow strip on the base of the document (and we need to hit an onscreen space bar when we run out of space, which is again kind of odd). Yes, we could also simply use Ink Tools in MS Word and scribble in a Word file, but then that is pretty much the same as scribbling somewhere else as the handwriting does not get converted into text. We also encountered instance of apps not responding well to the Pen’s taps, and even freezing and crashing. And when we gave the Pen to one of our sketch-minded friends in an ad agency, he claimed that the Pen was very good but not quite as good as the Apple Pencil in terms of sketching. Speaking for ourselves, we loved the form and functionality of the Pen, and also liked the fact that we could customise it so heavily, but its inconsistencies were often very frustrating. Microsoft could well take a few notes out of the pages of Samsung, who have done much more with the S-Pen Stylus and the Note series. Ironically, one cannot think of the Galaxy Note without the S-Pen, but the Surface Pen, for all its muscle, does not have the same attachability with the Surface Pro 4. Not yet, as of now, at least. 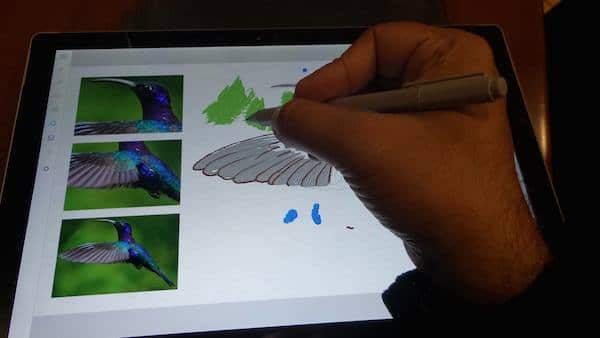 Type works better with the Surface than scribble. At this moment.

Was this article helpful?
YesNo
TechPP is supported by our audience. We may earn affiliate commissions from buying links on this site.
#Surface Pro 4 #Surface Pro 4 Diaries