We lost count of the number of times Microsoft executives referred to the Surface Pro 4 as a “tablet” during its launch in India (well, we kept count initially and stopped after seventeen). So well, on day four of our daily tryst with the Surface Pro 4, we decided to use it mainly, well, in tablet mode. 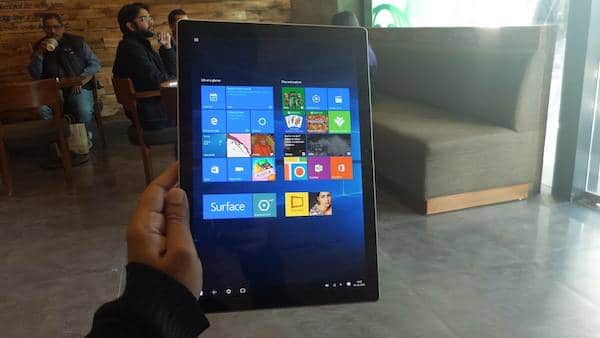 And the results were a bit mixed, to be honest. No, we would not go as far as some worthies who have called the device unusable as a tablet. Au contraire, it is very usable in tablet mode, and once again, we cannot stress how compact and lightweight the device is for something with a 12.3 inch display. Carrying it in our arms was very comfortable, as it is actually shorter than the iPad Pro and well, as the sides are not as curve-y as those of the iPads, it actually feels a lot less slippery – it is actually a lot more comfortable to sit in bed with a Surface Pro 4 minus the Type Keyboard than it is to sit with an iPad Pro. The compactness and slightly thicker edges help – you feel like you are holding a book instead of something electronic. And somehow we felt less paranoid about the magnesium back of the Surface picking up scratches as compared to other tablets.

The Windows app ecosystem has been taking a bit of flak for not having enough apps, and when you compare what’s on offer at the Windows Store with its counterparts on Android and iOS, the pickings might seem thin indeed. Which is exactly the point at which you need someone to lean across and whisper in your app-addled ears “But this is a PC, dummy!” Let’s face it, given a very good browser, the absence of apps becomes just a little lass galling, and Edge and Chrome in combination do a very good task in that department. We are among those who don’t use apps for Facebook or Twitter on our PCs and simply head on to the relevant site, and well, that worked very well indeed, as did viewing videos online. For news, we found the Flipboard very handy (if not on par with its iOS avatar in terms of smoothness), and reading our e-book collection on the Kindle app is just dandy.

The kickstand at the back is also very useful, as you can sit back and read a book, watch a film or a video, instead of balancing the tablet on your knee. Speaking of which, the Surface Pro 4 is a GREAT device for watching videos – that display handles colors beautifully and the dual speakers deliver very good sound (loud enough to make some folk three tables away look at us disapprovingly at Starbucks, anyway). Nope, we would not put them quite in the class of the iPad Pro’s four speaker arrangement, but the quality of sound produced is exceptional for a tablet.

Which of course also brings us to the one quality of the Surface that makes it a great multimedia device – support for USB drives. Unlike in the iPad or some Android devices, where getting films on to a tablet inevitably meant fiddling around with cloud storage, you can use the microSD card slot or the USB port on the Surface to view content from it, without any fuss whatsoever: no drivers or apps to install at all. We found ourselves watching films off a friend’s hard drive and even viewing press releases and other documents handed down in a thumb drive – no requests needed for mailing the content or ‘dropboxing’ it. Oh yes, this is pretty much the Windows experience with no fetters…

Or wait, make that “with almost no fetters…”. For, just as with the Surface Pen yesterday, Windows 10 reared up from time to time with its eccentricities. For instance, there seemed to be no obvious way to access an onscreen keyboard in MS Word when we were in tablet mode. Switching tablet mode “off” (you can do so even if you do not have the keyboard attached), did bring up the onscreen keyboard. Which is a bit odd when you consider that the onscreen keyboard pops up in the browser and even the Kindle app without any problems. It is almost as if the device assumes you will not need to type in a word processor application (reads that sentence again, sighs wearily). The onscreen keyboard itself remains a bit on the large side, obscuring a lot of the display in default mode. And of course, there remains the little matter of many of the apps in the Windows ecosystem not being quite optimized for tablets, which makes navigation a bit problematic. And there is the little matter of pausing between switching from landscape to portrait mode, which seems odd in such a powerful device. The Surface Pen (about which we talked extensively yesterday) does make life a bit easier in some regards, when it comes to sketching and the odd bit of note-taking, but it does not really step into the shoes of the Type Cover keyboard. 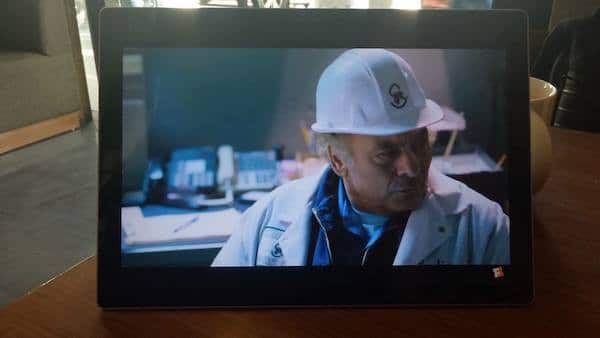 Which of course, makes us stop a bit short of recommending the Surface 4 Pro as a tablet. No, we do not doubt its hardware muscle or its performance – it multi-tasked brilliantly, was superb with multimedia and after being used as a tablet from 9 am to 6 pm, still had almost half of its battery life left. Where it stumbles is in the department of experience. Yes, it is definitely the best and most well-endowed (in spite of that compact frame) Windows tablet we have used. But truth be told, it is not really up there with the likes of the iPad and Android tablets.

But then, with Windows and that USB port, it does not need to be, does it?