Android’s seventh major update – Nougat is finally out of beta and available for every eligible Nexus phone. Along with some visual overhauls, it has ushered in a lot of significant improvements over Marshmallow. The crucial changes include features like multi-window, notification shade redesign, Vulkan API support, Daydream for virtual reality, a dedicated JIT compiler for faster booting times and more. However, these additions have overlooked a bunch of minor tweaks and functions that are definitely worth looking into. Hence, here are six such lesser known features that come bundled with Android 7.0.

Along with Multi-Window support, Nougat also adds one of my favorite multitasking features from custom ROMs, a quick app switch shortcut. It essentially allows you to jump between two most recently opened applications by merely double tapping the “recents” button. It might sound like a nominal inclusion but can vastly come in handy during appropriate scenarios. 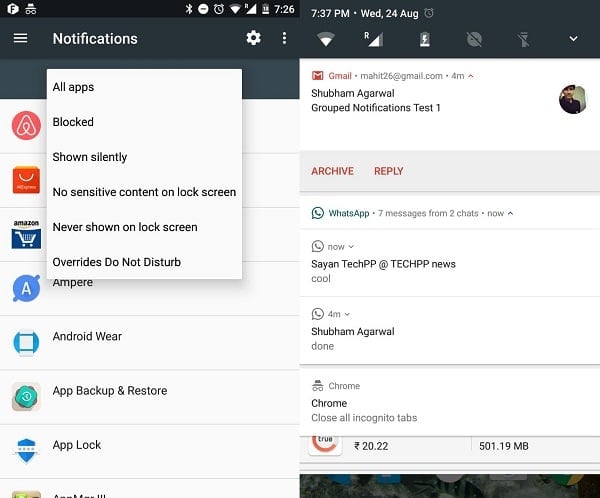 Notifications on Android Nougat finally group together based on a specific application. Additionally, you can swipe down using two fingers on a particular alert and interact with every one of them individually. For instance, if you get two emails, you’ll be able to archive or reply to both of them separately after reading the subject. Also, they’ve added “Quick Reply” which works exactly the way it sounds.

DPI stands for “dots per inch” and it represents how huge or tiny your phone’s content look. However, until now customizing DPI was limited to rooted devices. With Android 7.0, Google has brought the ability to every user meaning you can adjust how many WhatsApp messages appear on a single page.

Google has also addressed security with Android 7.0 with individual file-based encryption. Unfortunately, you’ll need to manually enable this setting as it will wipe your phone entirely in order to encode every file from scratch. It will definitely assist in isolating user data better, although, not a whole lot of smartphones are going to receive this update anytime soon.

No, you didn’t misread that subheading. Stock android, after years of living in isolation, now has a clear all applications button in the recents screen. Although, you need to scroll down to the last app for discovering it. Despite being a minor feature, a clear all option is undoubtedly one of the most acclaimed aspects of Android 7.0.

6. A Redesigned and Sensible Settings Menu 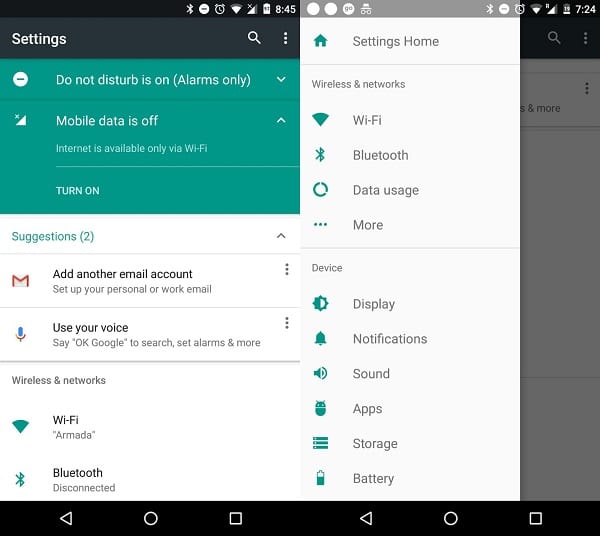 Android Nougat has also overhauled the settings menu with a new navigation drawer on the left for switching between different screens and it shows little information like the battery status on the main screen. Furthermore, graphs for battery and data have been redesigned and now look a lot more modern.

So those were some of the most lesser known additions on Android Nougat. It is possible that there are more, hence if you find anything interesting, do drop a comment down below.

Was this article helpful?
YesNo
Photo Credits: AndroidPit
TechPP is supported by our audience. We may earn affiliate commissions from buying links on this site.
#Android 7.0 #Android Nougat #Hidden Features