Google has announced that the Wi-Fi Assistant which was an integral part of its Project Fi is going to be available for all Nexus devices irrespective of the carriers they are latched to. The Wi-Fi Assistant technology was used to automatically and securely connect the devices to free public Wi-Fi hotspots. Project Fi has been a much acclaimed experimental wireless service that blended coverage from mobile networks and Wi-Fi networks by accessing the millions of free public hotspots. 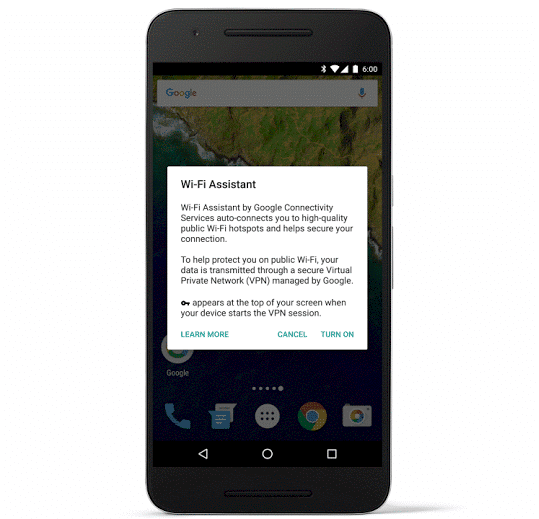 The cornerstone of the Project Fi was that Google encrypted the data that was transmitted between the free public Wi-Fi and the user’s smartphone, an essential feature while connecting to public Wi-Fi. Now Google will allow all Nexus users to access the Wi-Fi Assistant feature without the need to change the carriers. This means that if you own a Nexus device you would probably manage to conserve a major chunk of the mobile data that you would be otherwise using when away from your home network. As we mentioned earlier another plus point is the encryption feature.

This is what Simon Arscott, project manager for Project Fi had to say, “We built Project Fi as a testbed for innovative ideas,” and further added, “And we saw this as an opportunity through our Nexus product line to bring it to even more users.”

The feature will be made available to all the Nexus devices running Android 5.1 and higher. Now this will include Nexus 4, 5, 6, 5x and the Nexus 6P. Meanwhile, it will also support the following Nexus tablets, Nexus 7, 9 and 10. It is indeed overwhelming to see that the age-old Nexus 4 is still supported for the Project Fi feature, this indicates how Nexus devices still lead the Android ecosystem when it comes to updates and new features. Coming back, users will be able to toggle the feature on or off and once its switched on the device will connect to public hotspots which are part of Project-Fi. However, the Wi-Fi assistant feature is currently available in select countries including Canada, Mexico, UK, Denmark, Iceland, Norway and Sweden.

TechPP is supported by our audience. We may earn affiliate commissions from buying links on this site.
Read Next
Android Q Beta 1 Available for all Pixel devices: All You Need to Know
#Google Android #Project Fi #Wi-Fi Assistant