Comma.ai Promises a Tesla Auto-Pilot Rivalling Self Driving Kit that will cost $999

While everyone seems to be in a rush to gain a head start in the self-driven car race, an AI Startup, Comma.ai seems to have approached the problem in a different way. The Comma one is a $999 add-on kit with a $24 monthly subscription fees and what it does will amuse you. The Comma One is capable of driving your car from Mountain View to San Francisco without requiring anyone to even touch the steering wheel, the brakes or put the pedal on the accelerator. 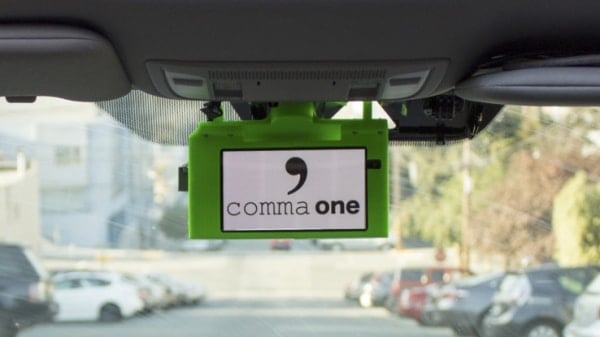 This might not turn the car completely into a self-driven vehicle but it would enable auto-pilot features, a feature that Tesla swears by. The transit between Mountain View and SF is nearly 40 miles and the Comma One might eventually help the Silicon Valley guys sit back and relax while the car drives itself (the makers of the Comma One warn that driver should still be alert).

Comma has been very modest about the kit and has been equalizing it with the Tesla Autopilot without the need to buy a new car. Once launched, Comma One is expected to support a small group of vehicles and with the passage of time will add compatibility for other models. George Hotz, the man leading Comma One says that his company heavily banks on “shippability” a differentiator that will set it aside from the other companies.

Furthermore, Hotz explains the simplicity of the device and claims that it is on par with the Tesla Pilot without the need for more sensors as it relies on built-in car front radars alongside the camera. Comma One will also make use of the video footage and this as they claim is something that even Tesla is not doing. He downplayed the recent Tesla crash and said that it was the typical case of driver not paying attention. Comma.ai is also aiming at improvising on the cruise control and lane assist tech, two technologies widely used during highway drives.

The Comma One is the size of a Sony PSP and is user installable, two traits that are very impressive considering that self-driving technology is a complex technology. Furthermore, Hotz explains how the company employed Artificial Learning and mapped the actual user data from its phone app that turned the smartphone into a dashcam.

Comma.ai is expected to ship by the end of this year and the company is already pilot testing the same on actual cars. As we said earlier its more of a wait and watch the game see how Comma One shapes up the self-driving car segment and whether or not this low-cost device will bring the self-driving technology to the mainstream. Also, without significant investment, it is most likely that the Comma One will never ship.