According to latest IDC report, Lenovo-Motorola is now the No.2 in the Indian market. The position was previously held by Micromax but this quarter, Lenovo-Motorola took the lead and pushed Micromax to the third place while Samsung is still ruling the roost with 23% of market share. Also, this is the first time Indian market has witnessed a major spike in the volume with the total number of units shipped pegged at a staggering 32.3 million units.

The Indian market has registered an impressive 17.5% on quarter growth and an 11% on-year growth in the July-September time frame. The spike in the numbers can be attributed to the festive season and the mega online sales by all the major e-commerce destination.

Samsung seems to be unaffected by the Note 7 debacle or maybe the announcement of other smartphones balanced the act. The year-on growth for Samsung is an impressive 9.7 percent. Just like the previous quarters J series has been elemental in the sales surge and this time around it’s the Galaxy J2 (2016) that has sold in good numbers. 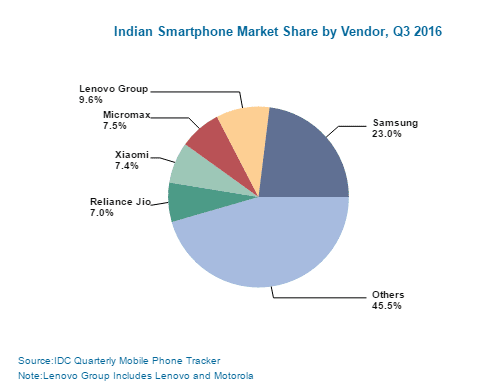 Lenovo-Motorola has climbed to the second-place thanks to the 9.6 percent share in overall smartphone shipments. Lenovo’s shipment has skyrocketed with an on quarter growth of 46.1 percent and this success can be attributed to the E3 Power and the Moto G4 models. In the meanwhile, K5 Note has been the front runner for Lenovo.

Micromax market share plummeted by a 32 percent and the according to IDC this downfall has been a direct consequence of fierce competition from the local vendors in the sub $100 segment and with the Chinese players in the $100-$150 segment.

Xiaomi has finally made its foray into the top 5 as its shipments literally doubled as opposed to the last quarter. The year-on growth is an impressive 2.5x and it seems that the decision to go offline might come as beneficial for Xiaomi. The Redmi Note 3 and the Redmi 3S have been driving sales for Xiaomi.

Surprisingly, the LYF brand powered by Reliance Jio has seen a surge in demand with a market share of 7%. It is very likely that the initial Reliance Jio offer which required the users to buy a LYF branded handset has fuelled the sales.

Online share of smartphones has also increased as per IDC and has registered an impressive 35 percent on quarter growth. The online market is still predominantly lead by the Chinese vendors and it only helped that most of them offered impressive deals during the festive seasons and the online mega sales. Lenovo group takes the lead as it accounts for one-fourth of total online smartphone shipments and as we explained earlier the sales is lead by the G4 and the K5 series. Furthermore, Xiaomi’s Redmi 3S and the Redmi Note 3 have also spurred up the online shipments to a large extent.

On a related note, the 4G shipments have registered an impressive growth rate of 24.8 percent and arguably this is due to the roll out of the Reliance Jio network and the need for the VoLTE enabled devices.