LetterSnap is the Quickest OCR App for Extracting Text from Images

Despite the rapidly evolving technology, OCR (Optical Character Recognition) applications still haven’t been able to progress at a substantial level. Most of them are either utterly inconsistent and some of which are usable, take more than a couple of seconds to process. Fortunately, there’s a new app in town and it’s called LetterSnap OCR. 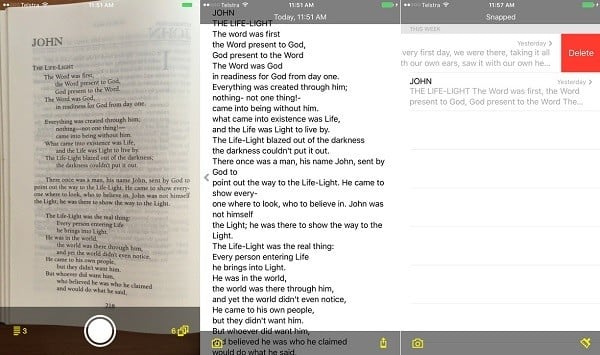 LetterSnap is, essentially a barebones iOS application for extracting text from scanned images. It may sound relatively similar to what other OCR apps already offer, however, the biggest benefit you get with this one, is the speed. The process is, though, quite straightforward – you scan a document or a couple of them, LetterSnap uploads these files to the cloud, performs the necessary operations, and yields a simple text file containing the content you wanted. Now, the cloud part may sound time-consuming but surprisingly, it is indeed, quick and won’t take more than ten seconds depending on how many documents you clicked. The rest of the interface has been kept minimalistic containing merely a list of your recent scans on the home page.

In our brief testing, we found LetterSnap to be astonishingly fast in recognizing and getting the results. When it comes to the quality, it does the job well unless the text size is extremely small or unreadable. The app can also scan Japanese and Chinese languages if required. Under the hood, LetterSnap is powered by Google’s Cloud Vision, an image analysis API that lets applications understand different elements of an image such as objects, text, faces, and what not using machine learning algorithms. LetterSnap is currently limited to iOS devices including iPhones and iPads. Additionally, it’s not entirely free of cost, you get ten scans for trying it out and after that, you’ll have to live with a quantity-based pricing model. So, go ahead and give it a whirl. If you have a better alternative, do drop a comment down below.

iOS 16 Features: Every Major Feature Coming to Your iPhone
Read Next
Source: Producthunt