In the recent past, Samsung has been pushing their apps on the Play Store (Samsung Health, Samsung internet, etc.) and the latest one to arrive is the Samsung Gallery. The company’s standard photo gallery app comes preinstalled on all of its devices, and now the same can be installed on non-Samsung phones as well. However, the listing fails to mention the list of compatible devices and perhaps this is something it will update later. 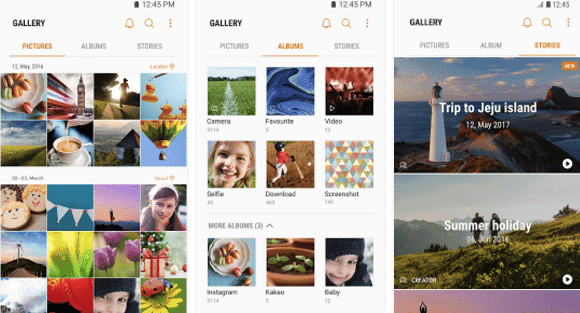 The Gallery app segregates your photos based on Pictures, Albums, and Stories. Apart from that the gallery app also offers the basic editing and media sharing options. The Stories section is pretty much similar to the “Assistant” feature in the Google Photo App, the one that automatically curates the pictures from your last trip and brings it to the forefront. Moving on, the Play store description doesn’t seem to be convincing since it is laced with bad English and equally awful grammar errors. Probably the guys at Samsung forgot to give a finishing touch for the description section.

Interestingly, the app also doesn’t seem to support the Samsung devices, but yet it has 481 reviews. Maybe it’s available for certain devices. Personally, I feel the Google Photo is the best bet when it comes to Photo apps thanks to its cloud storage and family sharing features. However, the Google Photo usually won’t support some of the native features, for instance on the Honor 8 Pro the Google Photo app doesn’t support using the fingerprint sensor to swipe through the photos.

It’s good to see that smartphone brands are offering their apps on the Google Play Store. I just hope for an uninstall options on the phones so that the user can delete proprietary apps while sticking to the Photo App of his choice. Want to check out the Samsung Gallery? Download it from here.

Android Auto for Phone Screens is now Available for Download…
11 Ways to Fix Play Store Download Problem on Android
How to Update Play Store App on Android in 2022
Samsung Galaxy Z Flip is Available for Pre-Order in India…
You Can Now Install Google Recorder with Live Transcribe on…
Google Pixel 4 is available on Amazon India, starting from…