Android Oreo – Google’s eighth major update for its operating system – will be soon rolling out to the handful of initially compatible Nexus and Pixel phones. However, unlike before, this time whether your smartphone will ever receive it or not, you should pay attention to what Android 8.0 has to offer. It promises to mend most of the core impediments Android always had such as inconsistent performance and in a lot of ways, presents the second chapter of its journey. 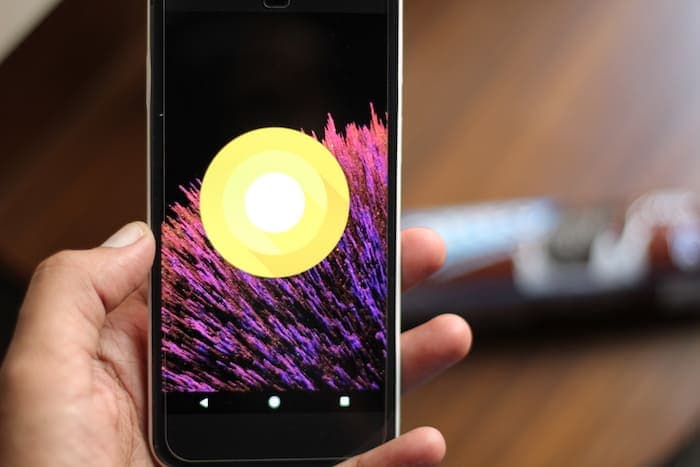 On the surface, though, Android Oreo isn’t the most exciting update Google has introduced, but if you dig a little deeper, you’ll find it loaded to the very brim with a plethora of under-the-hood enhancements. Upgrades that, apart from sounding attractive on Google’s presentation slides, prove to be effective. I have been using the new update on a Pixel for quite awhile now and here is what I learned.

Google’s new Android updates are historically considered notorious for pulling your phone’s pace a step back. And while the company has tried to address these concerns with previous releases, they’ve never been able to achieve the kind of success users anticipate. Android Oreo changes that. Google has added something called “Background Limits” which allows Android to terminate background processes that aren’t necessarily being employed. For instance, the OS might limit the number of times Snapchat updates your feed in the background, but won’t touch something like a music app which you often run in the background. Of course, developers can redo how their app functions and comply with these new restrictions.

Your phone’s performance as well as battery life, as a result, benefit and become surprisingly more reliable. Now, this doesn’t mean your battery life will overnight receive hours of boost. “Background Limits” will essentially make sure it won’t fall below the expected mark. Although you’ll notice substantial upswing when we talk about performance. Minutes after installing the OTA, my Google Pixel seemed to have been operating even better when I first unboxed it. That’s primarily because the phone had significantly more memory room to work with. Before the update, it usually had less than 2 GB but post-Oreo, I was regularly noticing about 2.6 GB of free RAM.

Similarly, Android Oreo will establish strenuous constraints for the amount of data any particular app caches locally. There are a few other refinements Google brought in which led to quicker boot times (50%), swift transitions throughout the OS and faster app loading times thanks to some minor fundamental tweaks. “Rescue Party” is another system-level addition that will, in theory, save you from boot loops by automatically executing a series of actions to recover the device.

Together, these advancements usher a state Android has never experienced before. Along with fettling almost everything Google couldn’t figure out in earlier updates, Android Oreo feels like an environment designed to put you – the user – in the front seat. Not the apps it runs, nor the overwhelming set of features it contains. Unlike Nougat or Marshmallow, I found Android Oreo’s promises to be a lot more fulfilling. Lastly, Google has even modularized Android’s core structure which should speed up software updates for their own phones and others. But we’ll have to wait a couple of months to check how that pans out in reality.

Stock Android with a Dash of Stock Flavor

Those were the behind-the-scenes efforts Google has attached to Oreo. The new update also carries a bunch of aesthetic overhauls. The most prominent one is the presence of a new light color scheme in the notification shade, settings, and other core views. I’m honestly not a big fan of this approach as it seems a bit too much on the bright side. It would have been a lot more convenient if Google had included an optional dark theme, but I guess that’s too much to ask. Perhaps, the folks at Mountain View are way too much into the original cream Oreo flavor. However, Android Oreo does support a new engine that will potentially let the operating system to support third-party themes. 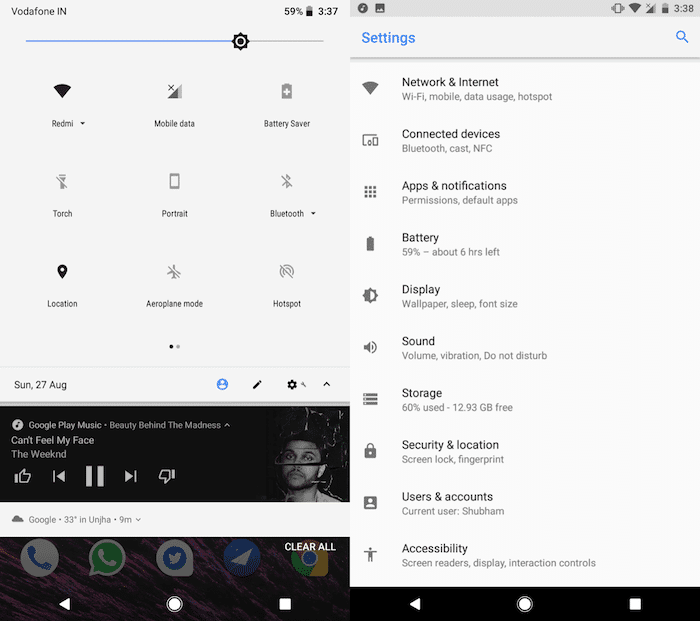 Furthermore, the settings app has been remodeled as well. It’s now cleaner, more organized and tucks away most of the advanced options under hidden sections. Again, this extends Google’s intentions for simplifying the operating system for the normal user to push forward its Pixel lineup. Pages such as Storage and Battery have been redesigned to offer more information on first glance and include actions such as “Smart storage” and “Battery percentage” in a more apparent manner. 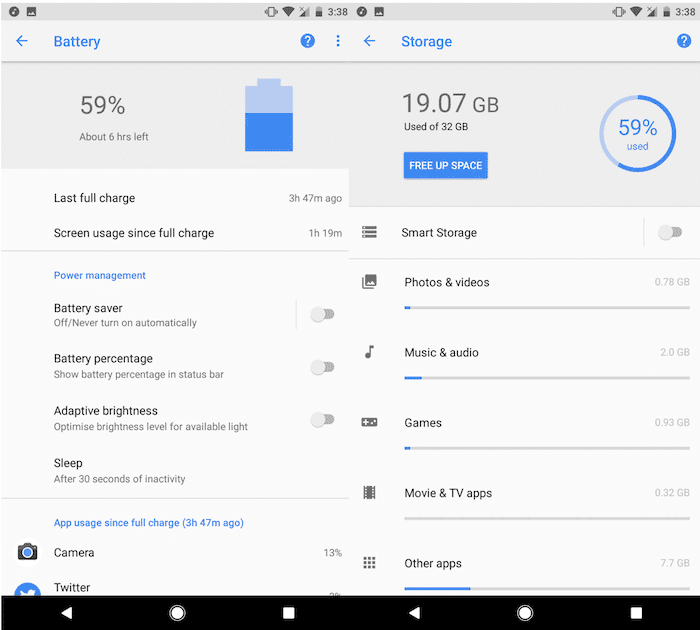 Oreo’s other cornerstone lies in notifications. Google has added an extensive array of new features for handling those constant alerts you are swamped with. For starters, the notification panel has been tweaked a little for hiding away the persistent notifications in a condensed interface giving you more room for other important stuff. The software will also theme the ones by music players based on the color of their album arts. Moreover, icons on the Pixel launcher’s home screen have little notification badges, and long-pressing them allows you to view and dismiss their respective notifications. 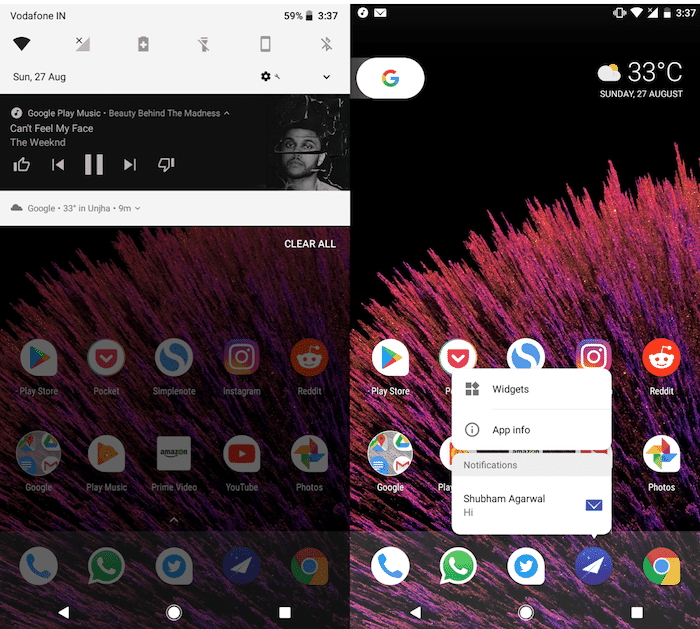 While it does appear helpful, I think Google is being a little too aggressive with placing these at your fingerprints. However, you will appreciate what they’ve done for ignoring them. Android Oreo comes with the ability to snooze notifications for a time period so that you can revisit them later. In addition to that, you now have notification channels which enable a granular control over which alerts specifically you receive from an app. I do have one feature suggestion – they can add a kind of “do not disturb” mode that collects all the incoming notifications when enabled and resends them when the defined period expires. Notifications have always been part of Android’s highlights, and with Oreo, Google accentuates that perk even more.

Bolstering Android’s multitasking prowess, Oreo also brings the much-awaited Picture-in-Picture mode. Once the app is updated, you’ll be able to merely press the home button and minimize the playing video in a small moveable window. .Pair that with the multi-window view and you’ve got yourself three apps running side-by-side. Unfortunately, though, apart from Google’s own range of video-oriented apps, you don’t have a whole lot of choices right now other than VLC and WhatsApp for video calls. 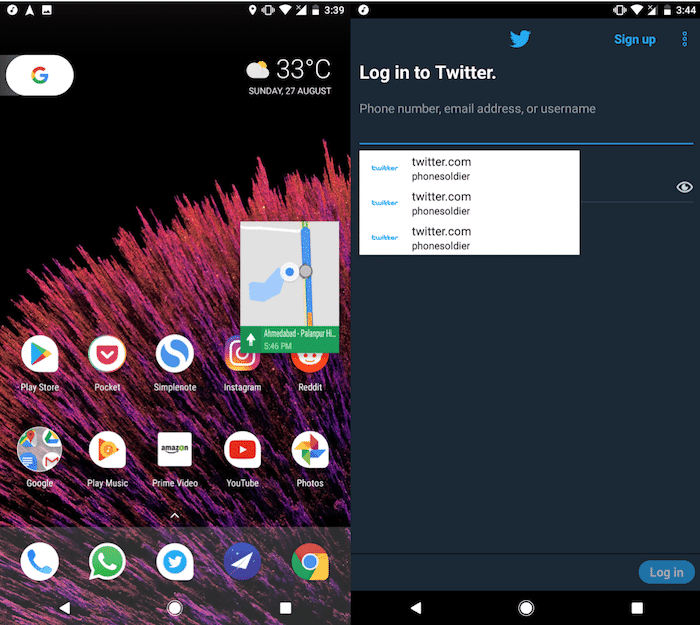 Now let’s talk about my personal favorite Oreo feature – auto fill and default password managers. Previously which was limited to the Chrome browser, now has been extended to standalone apps eliminating the need for remembering credentials at all. Starting from Android Oreo, you can configure a default password manager which will throw a pop up every time you try to log in a particular app. Thankfully, the list of supported apps is increasing as the time for public rollout approaches. Most of the major ones such as LastPass, 1Password have already updated their app.

The clipboard manager is now contextually aware as well. For instance, whenever it detects that you’re trying to copy an address, Android will intelligently offer to load that directly in Google Maps. Then there are the miscellaneous features such as better Bluetooth audio, quick option for adding a new custom ringtone, dynamic and new shapes for icons, improvements to the ambient display, WiFi Aware that will someday make apps like Xender obsolete and a few security-related changes.

There are a bunch of essential features that Stock Android still lacks. These include a native time-lapse camera mode, battery stats for a connected Bluetooth device, and a universal search. Additionally, I faced some occasional bugs which caused random reboots at times. I am, though, just nitpicking here and I don’t think Google could have done anything more with this release. It’s, in fact, refreshing to see them taking a pause and polishing the existing rough edges.

For the past few years, Google has been on an expedition to build the second chapter of Android. From bidding adieu to a design that seemed to have come out of a sci-fi flick to launching their very own iPhone competitor, the company has made significant headway into a state Android has never sustained before. Android Oreo, in my opinion, augments these ambitions even further.

Google’s Android refresh cycle usually carries a duo of yearly updates – one that noticeably seems like a step forward bringing a range of new interface elements and another follow-up release which largely aims to mend the rough edges Google left with the former, performance bumps and a couple of minor UI refinements as well. Android Oreo, as you can tell, belongs to the latter category. However, unlike previous second-generation versions, Android 8.0 presents a substantially more mature mobile operating system which doesn’t skimp on the bare essentials and has allowed the operating system to enter a state of coherence that they have never been able to enter before, something which iOS has always relished.

Was this article helpful?
YesNo
TechPP is supported by our audience. We may earn affiliate commissions from buying links on this site.
Read Next
How to Fix Google Chrome Translate Not Working
#Android 8 #Android O #Android Oreo #google #Google Pixel #review