Exactly after a year of the original Pixel launch, Google has today unveiled its second-generation. This time around, however, the company is not offering the same set of hardware and design on both of the variants. The bigger and pricier Pixel 2 XL is where most of the action is as it comes with a nearly bezel-less front that falls in line with the industry’s growing trends. 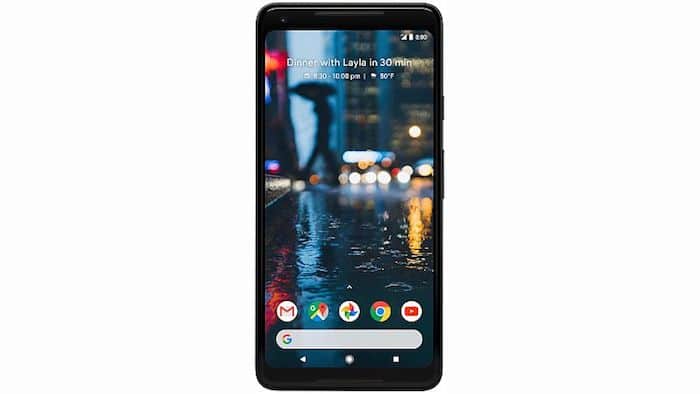 For starters, the new Pixel 2 XL flaunts an all-aluminum frame and a massive 6-inch Quad HD (2880 x 1440 pixels) OLED panel up front. Since the bezels on the sides have been waived off dramatically here, the LG-made handset isn’t as gigantic as other 6-inch phones. It also features an aspect ratio of 16:9 like a few recent phones such as Samsung’s Galaxy S8 and LG’s G6.

This change, more importantly, should push developers and entertainment services further to add compatible content. Furthermore, the screen is protected by a layer of Corning’s latest Gorilla Glass 5. Moreover, the display supports an always-on feature that shows you essential details like the time without having to press the power key. Interestingly, this new feature also continuously listens for music and automatically shows the song and artist name on the lock screen. Neat. 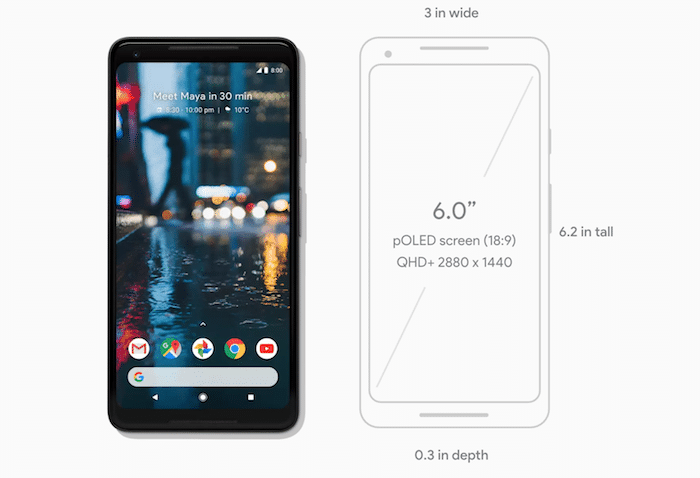 As far as the internals are concerned, the Pixel 2 XL is powered by Qualcomm’s Snapdragon 835 chipset instead of the rumored 836. There’s 4GB of RAM, 64/128GB internal storage which is not expandable, Adreno 540 GPU, and a sufficient 3520 mAh non-removable battery.

Google has also mended one of the most criticized deficiencies of last year’s Pixel phones – waterproofing. Hence, the new Pixel 2 XL is IP67 certified. In addition to that, there’s a fingerprint reader on the back like last year and a USB Type-C port on the bottom. As rumored and unfortunately, it lacks a standard 3.5mm headphone jack.

The Google Pixel 2 XL is also the first Android phone to come with Google Lens. It lets you recognize objects by pointing the phone’s camera towards an object. For instance, point it at a flower, and it will tell you the species it belongs to. Point it at a concert poster and Google Lens will bring pages for tickets, timings and more. 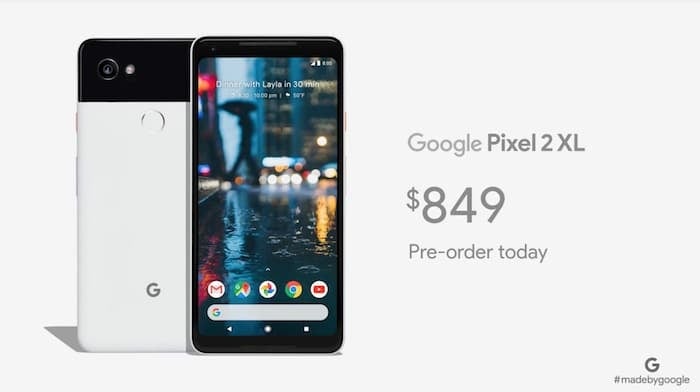 The Pixel 2 XL inherits the same 8-megapixel front-facing camera sensor from last year. There are, however, a few notable advancements on the rear. It comes with a 12-megapixel shooter that now is assisted by an improved focusing mechanism and  Optical Image Stabilization.

Instead of adding a dual-camera setup, Google has made use of its software prowess for offering a Portrait Mode for depth-of-field bokeh effects. It does so by using a dual-pixel technology for differentiating various complicated scenes. It’s also not just limited to the rear camera, the front one supports it as well.

The camera you find on any Pixel phone now features something called ‘AR stickers’. These are basically virtual creatures you can superimpose and interact with while clicking pictures. For videos, the Pixel 2 XL employs both electronic and optical image stabilization for preventing those shaky frames. Like last year, Pixel 2 XL allows you to upload unlimited images and videos in full-resolution on Google Photos.

Lastly, the Pixel 2 XL borrows the Edge Sense functionality from HTC’s U11. As a result, you can perform various actions like triggering Google Assistant by simply squeezing the sides of the phone. It’s certainly a novelty not everyone will employ but it can prove to be useful for quick tasks such as screenshots. It even works when your phone is in a case.

Despite a bunch of reports, the Pixel 2 XL runs on Android 8.0, not 8.1 out-of-the-box. Google has updated its Pixel Launcher, though. The search bar is now situated at the bottom and it sports a new weather and calendar widget. You will be able to buy it in two color options – Black and White. The 64GB model will cost $849, while the 128GB model will jump to $949. Pre-orders begin from today and it will be available in six countries including India and the United States. Buyers will be also eligible for a complimentary Google Home Mini on every Pixel 2 purchase.

Was this article helpful?
YesNo
TechPP is supported by our audience. We may earn affiliate commissions from buying links on this site.
Read Next
How to Fix Google Chrome Translate Not Working
#google #Official #Pixel 2 XL