Lenovo is one of the biggest fishes in the mid and budget range segment ponds and with its current smartphone range, this fish is only getting bigger. The company recently added two devices to its popular K series – the most recent of which is the Lenovo K8 Plus which comes as the successor of the K6 Power, which was launched last year and did remarkably well in the market, selling over a million units. 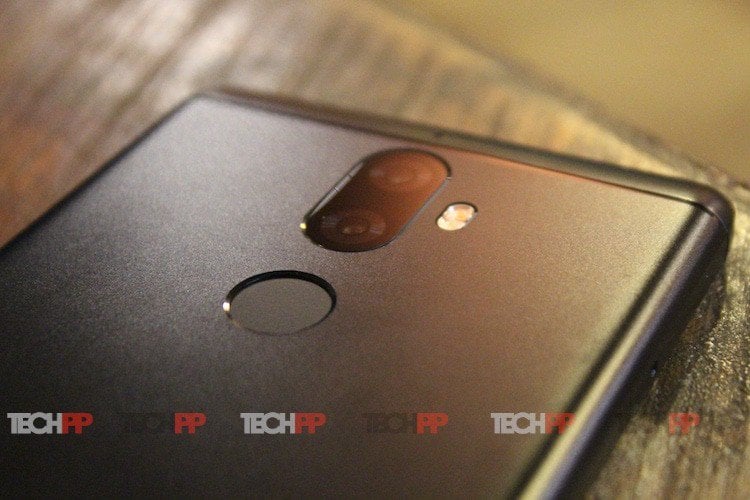 Just like in the case of K8 Note, the company has skipped a generation in nomenclature and has hopped on K8 Plus directly from K6 Power (and about going from Power to Plus, that is another story). Now, the K8 Note lived up to its generation jumping name. Can the K8 Plus do the same?

When we get into the budget band in the smartphone market, the first thing many manufacturers compromise on is the looks of the smartphone and something similar has happened in the case of the K8 Plus as well. But this does not mean the phone is bad looking. In fact, the K8 Plus is a rather decent looking device, and the black color is an added plus, but our problem with the design is the same we have mentioned quite some time in the past: it has been a repeated a little too often. 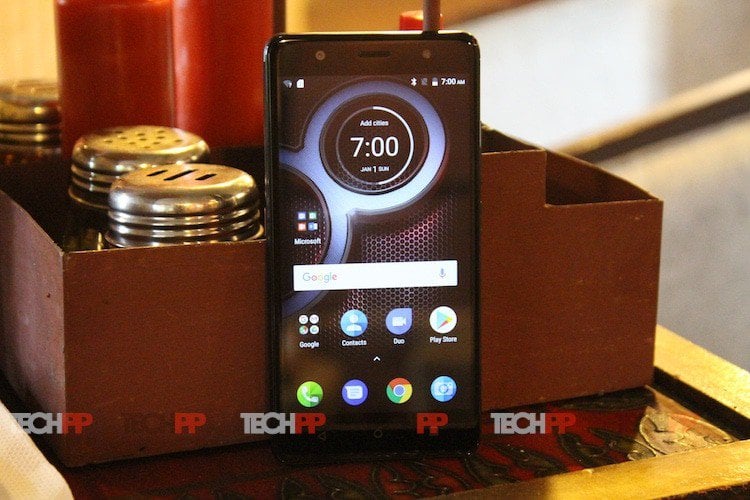 The smartphone comes with a 5.2-inch full HD display which is protected by Corning Gorilla Glass 3, topped with a 2.5D curved glass for some extra gloss. The front is majorly dominated by the screen, but the phone does have some seriously big bezels around it. The display is bright and responsive and works well even in broad daylight.

Below the screen, the company has placed three capacitive touch buttons that are highlighted with a dark gray marking on the jet black bezel. Above the screen, the smartphone sports the front-facing camera, the earpiece, the proximity sensor accompanied by a front-facing LED. With the screen off, the phone is pretty much jet black. Only the capacitive buttons are slightly visible. But unfortunately, the capacitive buttons are not backlit which may create some problem for users.

Moving on to the back, the K8 Plus’ back is divided into three segments by two antenna bands. One antenna band is present on the top end while the other is at the bottom. In these three sections, the topmost and the bottommost are plastic while the center bit is metal (hardly distinguishable though). Below the first antenna band is the pair of two camera sensors, aligned vertically along with a dual LED flash, and there is also a fingerprint scanner just below the sensors. Above the second antenna band, you can easily find the subtle Lenovo logo. The back curves out on the edges, providing great hand feel.

On the base, the phone bears the speaker and micro USB port while the 3.5 mm audio jack sits on top. The left side of the smartphone holds the SIM card tray and the music key (customisable) with a pinch of red, just as on the K8 Note. And the right side comes with the volume rocker and the power/ lock button. 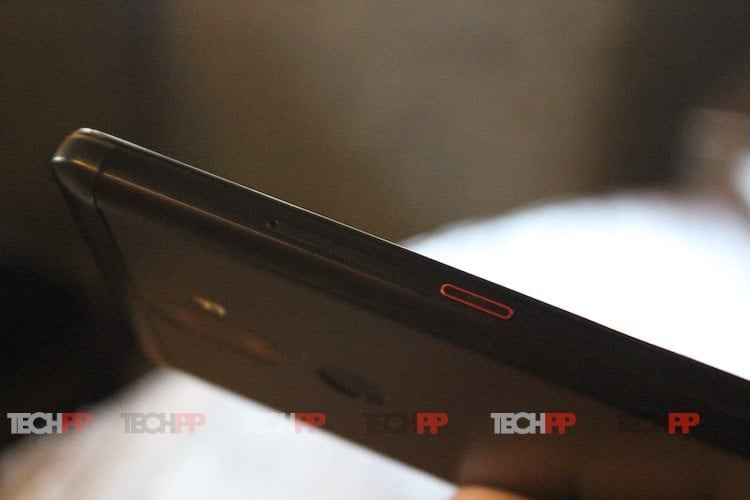 Overall, the design may be repeated, tried, and tested to the point of being boring but it still works. The smartphone measures 147.9 x 73.7 x 9 mm and weighs 165 grams. The phone is compact and fits in most hands but has big bezels around the display which makes the device appear bigger than it actually is. We could easily use it with one hand. It feels solid and sits well in hand too.

In terms of sheer numbers, the K8 Plus comes with a MediaTek MT6757 Helio P25 processor paired with 3 / 4 GB RAM and 32 GB storage expandable up to 128 GB with a microSD card. We received the 4 GB version of the device.

The K8 Plus handled casual gaming and multitasking really well. We switched from texting apps, to social media apps to casual games smoothly. We played games like The Spear Man, Temple Run 2 and Subway Surfer and the phone breezed through it. We had around 8-10 apps open in the background and the phone did not show any signs of slowing down or we did not face any screen-freezes. 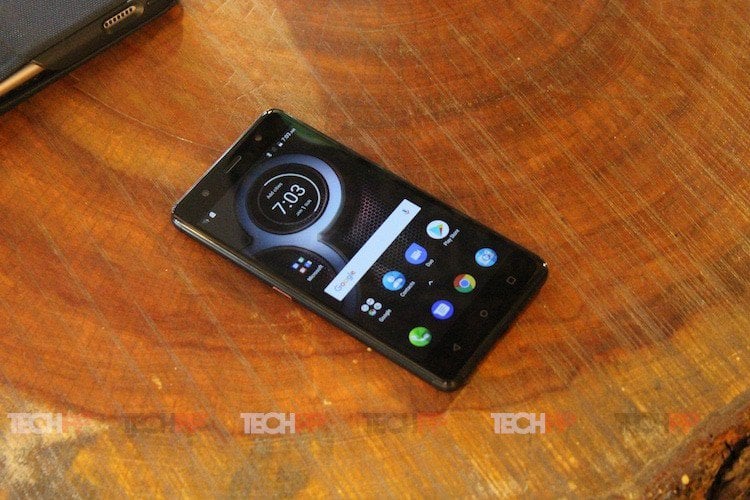 The difficulty came when we switched to high-end games. We tried games like Asphalt Xtreme and NFS No Limits. The apps took time to launch and we faced a few stutters and frame drops while playing the games a few times. Asphalt also crashed a couple of times.

The phone scored a super decent AnTuTu score of 66175 which is actually a little higher than what even the Xiaomi Mi A1 scored. Some might find the 32 GB internal storage a bit less, so thank god for the expandable memory option. The device is smooth, and majorly lag free and gets a little imbalanced only in the high-end gaming zone, but keeping in mind the price of the device, we think the K8 Plus passes the performance test with more than flying colors.

Lights will guide you… to good pictures 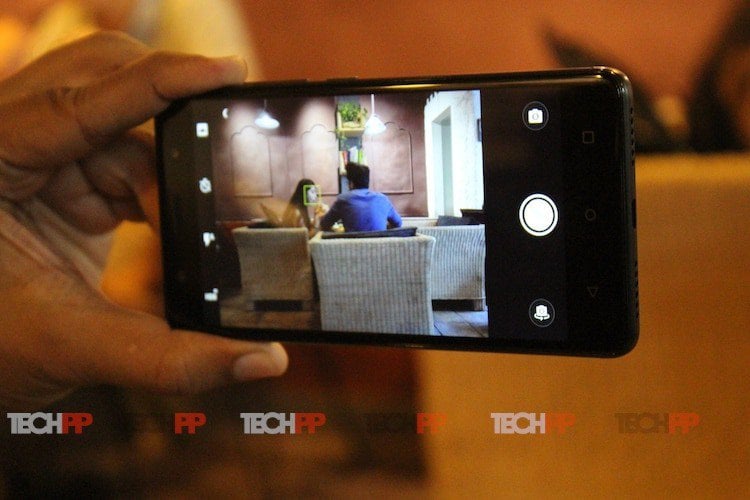 Although the K8 Plus is budget range device, one of its USPs is the set of dual cameras present on the back and boy, do they work!

The device has a primary 13-megapixel camera which is supported by a 5-megapixel depth analyzing sensor with PDAF. The phone takes really good shots in broad daylight. Sufficient light is basically the magic mantra behind getting all your pictures right. The pictures taken outdoors had a great amount of detail, and the color reproduction was pretty accurate as well. Close-ups were the real highlights in the outdoor environment. Although we did face a few focus issues, the end result was worth it. The detail in the picture was bang on the money. The smartphone also took good landscape pictures during the day and produced pictures very close to the real setting.

Indoors, while the performance was not really on the same level, we did not get disappointed. A bit of noise crept in when we took pictures indoors, and the color sometimes seemed more on the faded side. For instance, we took a picture of a strawberry shake which was basically light pink but through the camera looked pretty white. But again, we did not have any real issues with the detailing. 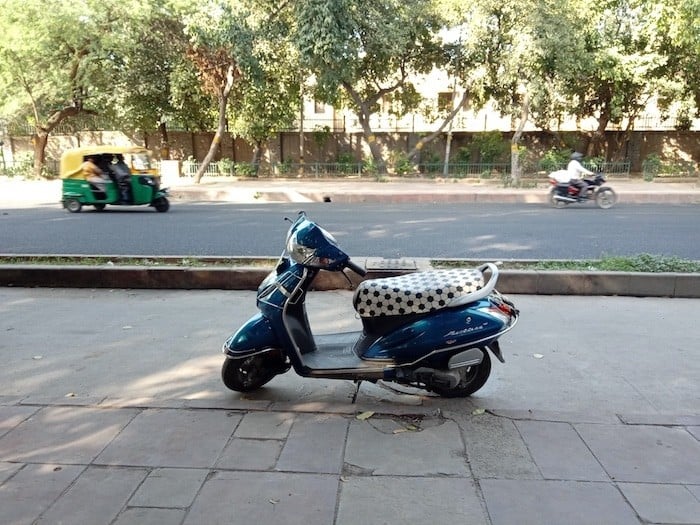 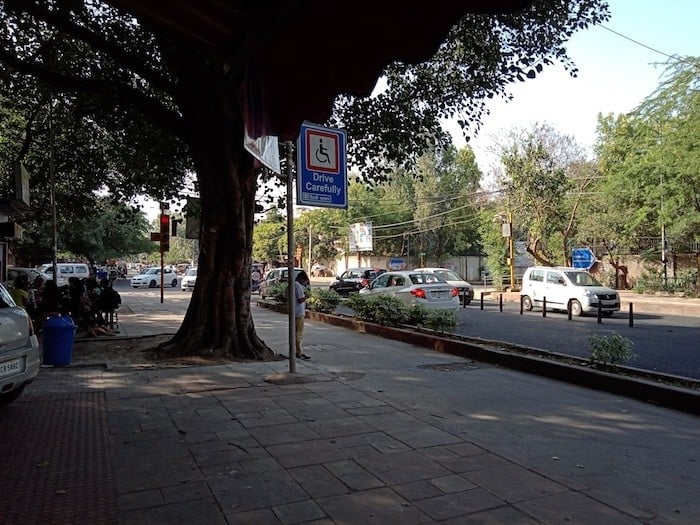 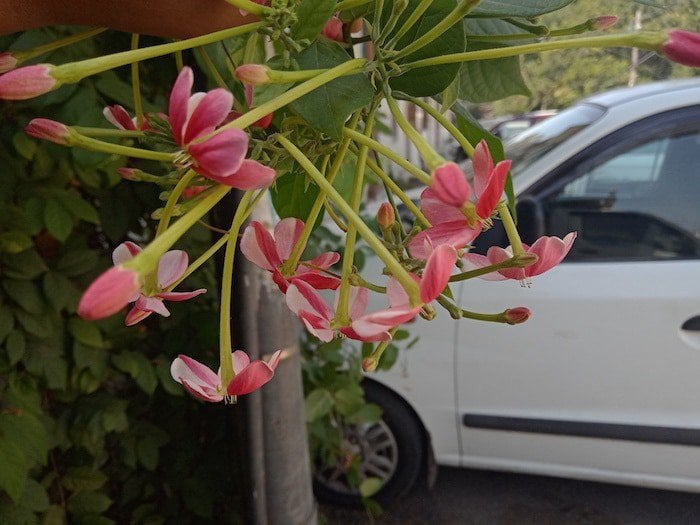 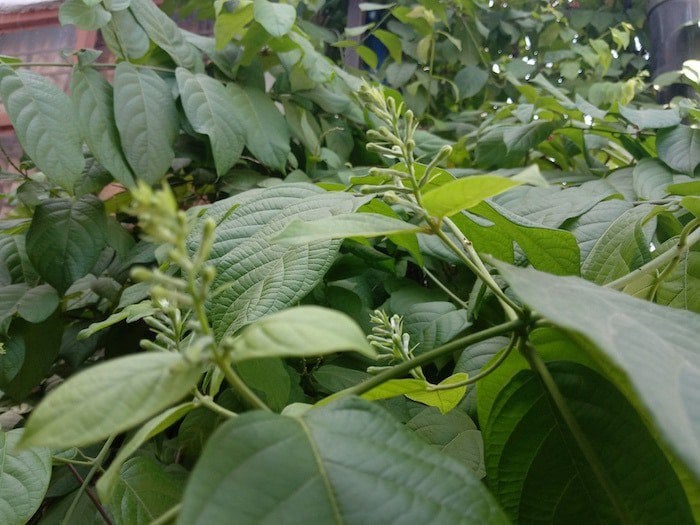 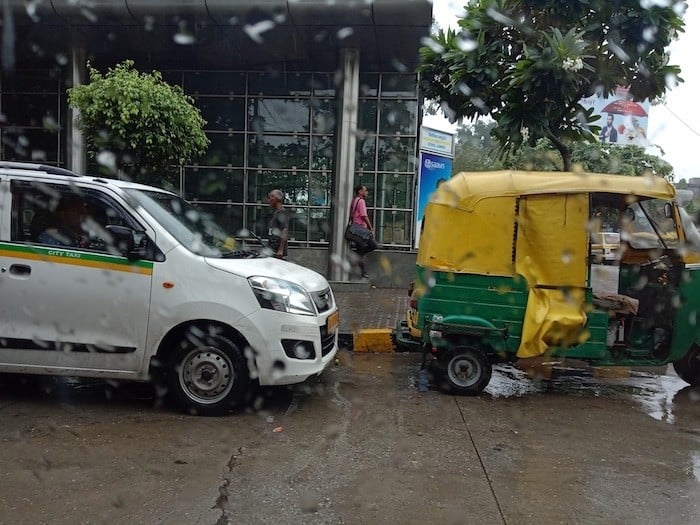 But it was not all flowers and petals with the K8 Plus’ camera. As we moved towards low light conditions, we were a little disappointed. A lot more noise came in the frame when we took pictures in low light, and the level of detailing also went down. The phone also had issues with handling moving objects as most of the time the result was a blurry picture, and it also did not handle glare well.

Moving on to the depth enabled mode (which is what the dual lenses are for), the camera creates deep bokeh, but again the edge sensing can be a little moody. It sometimes focuses on the subject and creates bokeh in the background and at times just doesn’t work. We also had some issues with the shutter button, and there were visible lags. And the phone also takes a while to process images as well. 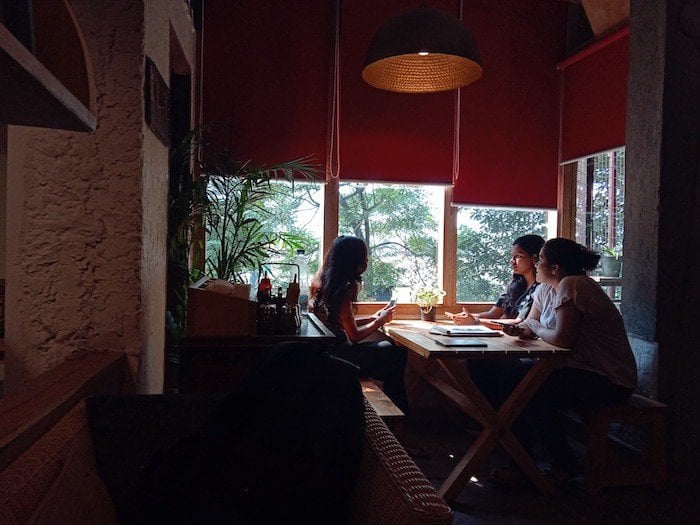 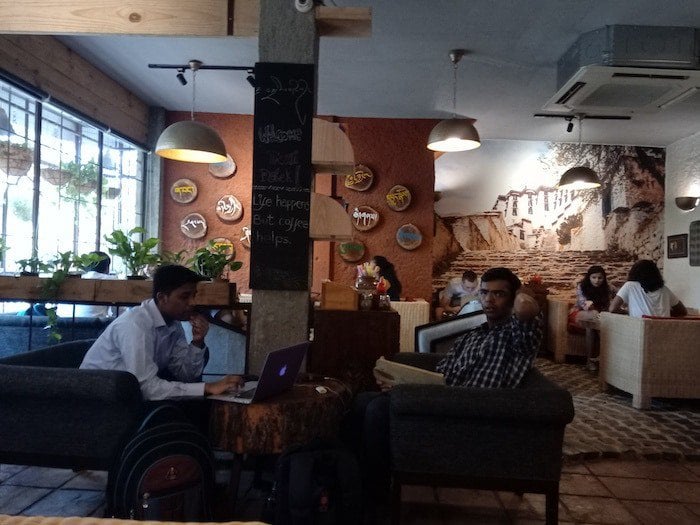 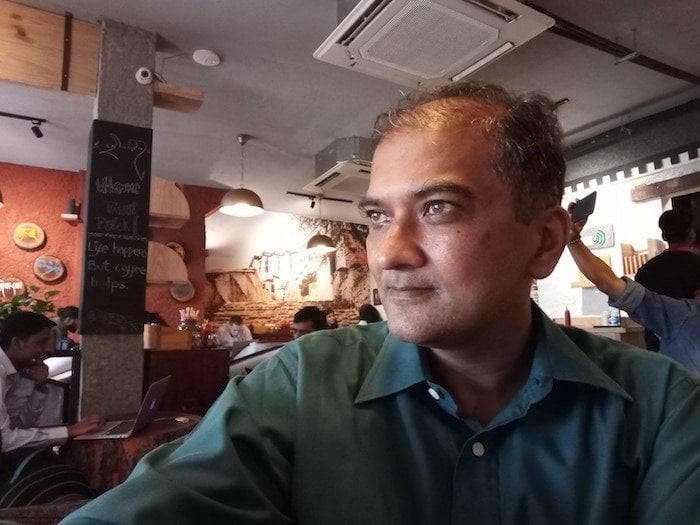 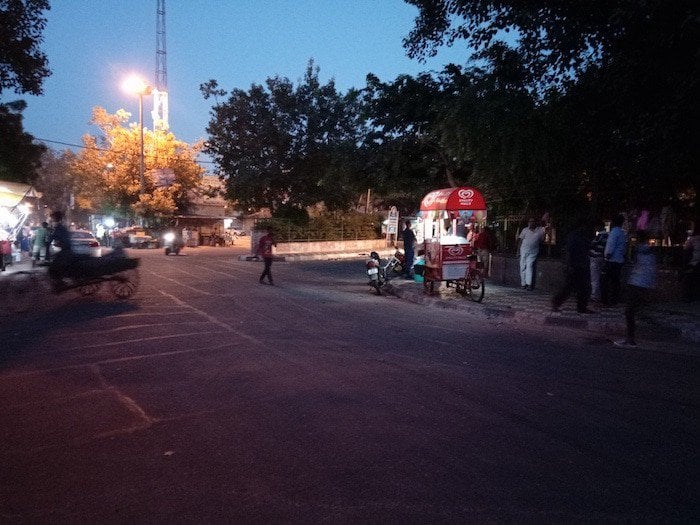 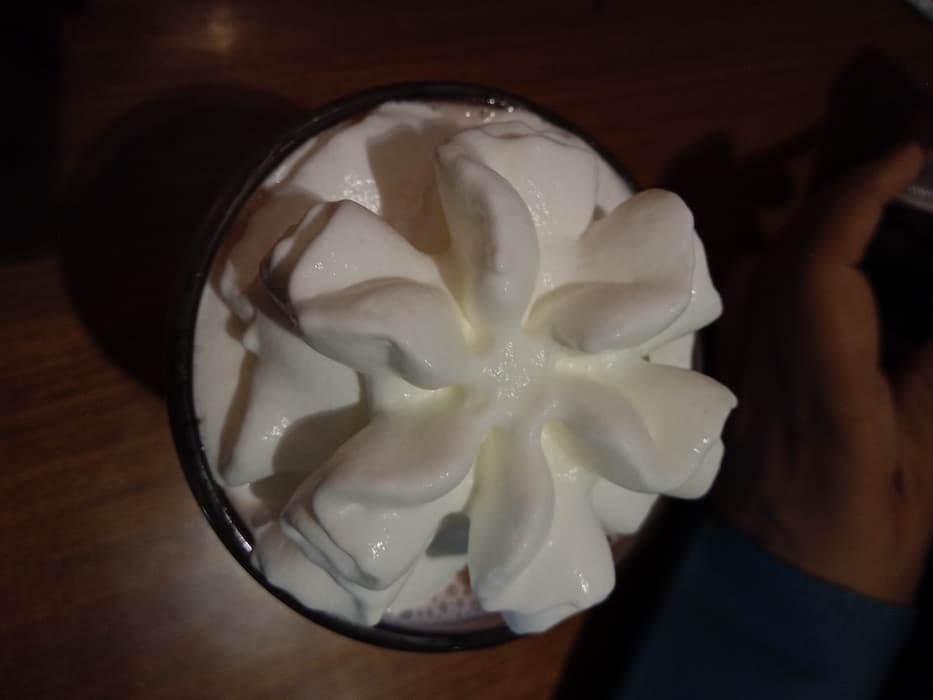 On the front, the smartphone has an 8-megapixel shooter with LED flash which is pretty ordinary. The colors and details in daylight seem average, but a lot of disturbance gets in once you move to low light. The camera app is pretty basic as well. There only four modes and depth enabled mode with depth editor.

Impressive battery, smooth Stock Android and all the right things

If the camera is the main USP of the Lenovo K8 Plus, the battery is definitely its wingman. The smartphone comes with a 4000 mAh battery which explains the thickness of the smartphone. In terms of battery life, the K8 Plus is definitely impressive. It can last easily up to two days under moderate usage and can easily see off a day under heavy usage. 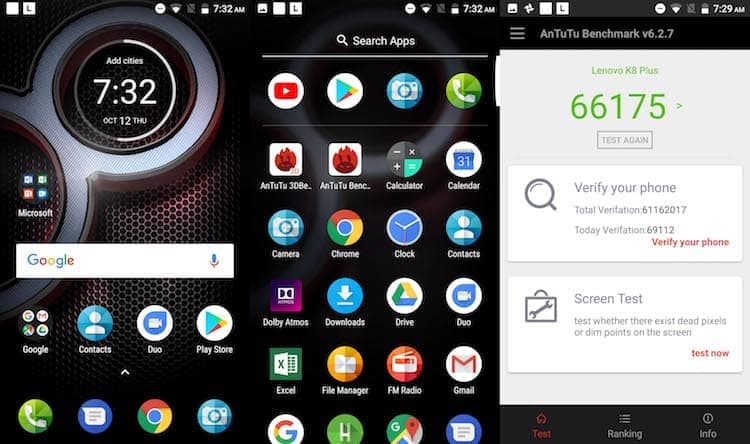 Now that Lenovo has dropped VibeUI, the K8 Plus also comes with Stock Android 7.1.1 out of the box. The UI is free of bloatware and is definitely smooth. This also means that the camera app is pretty basic as we mentioned previously and you do not really get as many add-on features as you would on a skin like MIUI or Vibe UI. Other than that it is the same old pure and basic stock Android experience. Some will love it, some will not, but that is another story.

Lenovo is known for a great multimedia experience, and this is present in the K8 Plus as well. The company has included Dolby Atmos Sound enhancement, which not only improves your loudspeaker sound quality but also the mic and other movie and gaming sound quality. Adding to this is the Lenovo’s in-house TheaterMax technology which takes all the content on your phone and puts it on a theater-like virtual screen with the help of VR glasses.

The call quality on the phone is also great, and we did not face any call drop issues. The connectivity options on the device include Wi-Fi, Bluetooth, dual SIM slot with a dedicated microSD card slot, FM, GPS, USB 2.0 and USB OTG.

It’s got the Plus factor 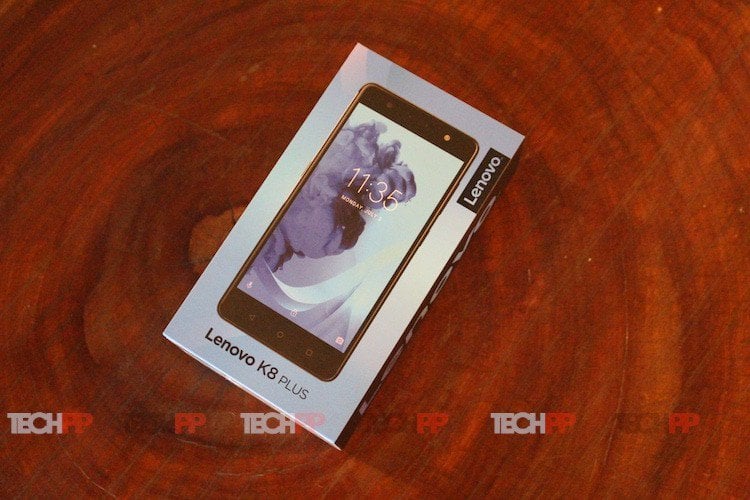 The K8 Plus had pretty big shoes to fill after the success of K6 Power and the responsibility went up another level because the company has skipped one generation. But we think the K8 Plus has hit the nail right on the head. The price of the device starts at Rs 10,999 (Rs 11,999 for the 4 GB RAM version), and it offers everything and more that you can expect from a smartphone at this price. The phone offers a good camera, great battery life decent performance, and a smooth stock Android experience. The K8 Plus has definitely got the Plus factor which can be a little problematic for its competition. Ranged against it are the likes of the Redmi Note 4, the Micromax Canvas Infinity (with its 18:9 aspect display) and the Honor 6X (if one is looking at dual cameras). But it says something for the K8 Plus that it stands tall amongst them all.

Was this article helpful?
YesNo
TechPP is supported by our audience. We may earn affiliate commissions from buying links on this site.
Read Next
Skullcandy Mod Review: Betting on doing the basics well
#lenovo #Lenovo K8 Plus #review