There is no denying that the Rs. 15,000 segment is one of the most competitive in the smartphone world. It is that price band where companies compete to provide the best in class features at a budget-friendly price. While some smartphones disrupt the market with their surprisingly affordable prices, some play purely on the feature card. And there are some companies that try to offer the best of both worlds, and one such company is Huawei’s sub-brand Honor. Honor has recently launched the Honor 7X, where the smartphone has tried to shake up the market with some new age features like dual cameras and almost bezel-less display, but the smartphone has some tough competition to deal with. Nokia came back in the tech world with a lot of fanfare and launched a number of smartphones right off the bat. One of these smartphones was the Nokia 6, which truly represented everything Nokia stands for – solid design and a reliable experience (now built around Stock Android). But what will happen when these two tech Spartans go head to head in a battle? Let’s find out: 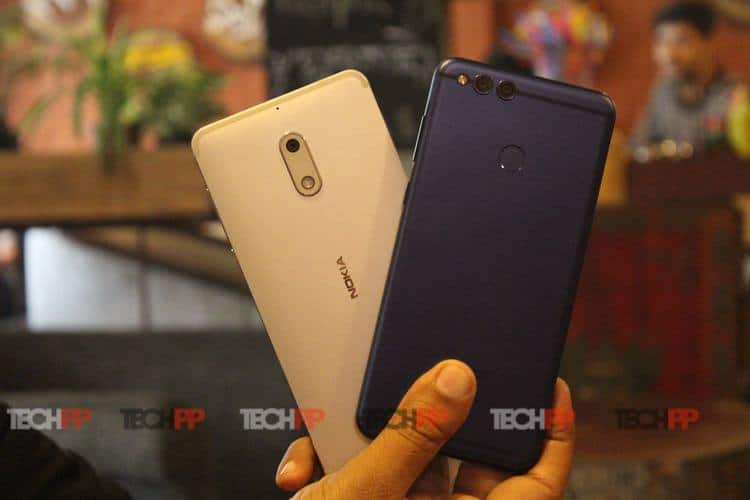 In the race to provide the best features at an affordable price, many companies often cut corners on the design elements of the smartphone, but this is not the case when it comes to the Nokia 6 and the Honor 7X.

Both the phones can easily turn heads and can be mistaken for a high-end device.
The Nokia 6 is made up of a single Aluminium slab. The smartphone is a great blend of metal and glass. There is nothing which really jumps at you when you look at the Nokia 6, but the phone is definitely not your typical budget range smartphone. The clean black front and the silver back with antenna bands, right on the edges and the capsule-shaped camera unit does help the Nokia 6 standout. 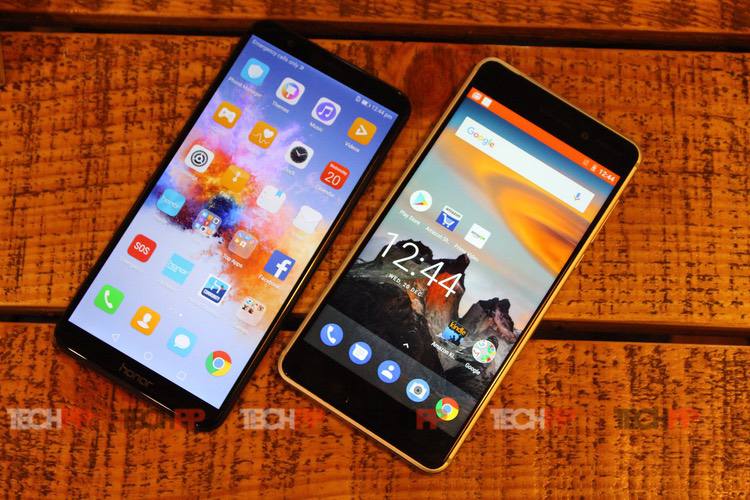 But when it comes to the Honor 7X, there are a few things that literally will jump at you, the moment you will see the phone. That bright 5.9-inch full HD display with 18:9 aspect ratio is definitely the first thing. While we liked the Nokia 6’s subtle silver color, we think the deep blue of the Honor 7X makes it a fish of a different sea.

Both the smartphones look and feel very different from the usual budget range smartphones, but because the Honor 7X has a few grand tricks up its sleeve, we think this round goes to the Honor 7X.

Kirin Knight against the (Snap)Dragon

The Honor 7X is powered by Huawei’s in-house HiSilicon Kirin 659 paired with 4 GB of RAM and 64 GB internal storage, and also comes in a 32 GB variant, which can be expanded to 256 GB. On the other hand, our other contender, the Nokia 6 is powered by the Qualcomm Snapdragon 430 coupled with 3 GB RAM. It comes with 32 GB onboard storage which can be expanded up to 256 GB via MicroSD card. 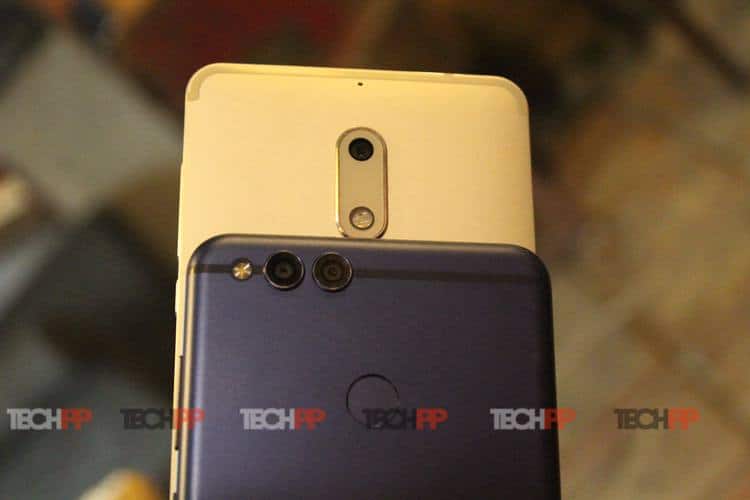 The Nokia 6 not only falls behind in terms of numbers but also in terms of performance. While both the handsets handled casual gaming and multitasking well, the major difference sprung up in the case of high-end gaming. The Honor 7X managed to run the Asphalt Xtreme and NFS No Limits with a few glitches, but the Nokia 6 had major problems with the two. It took the apps a while to launch and to our disappointment, they kept crashing afterward. We also experienced a slight heating issue with the device, which only made the matter worse. We have a clear winner in this case, and it is the Honor 7X. 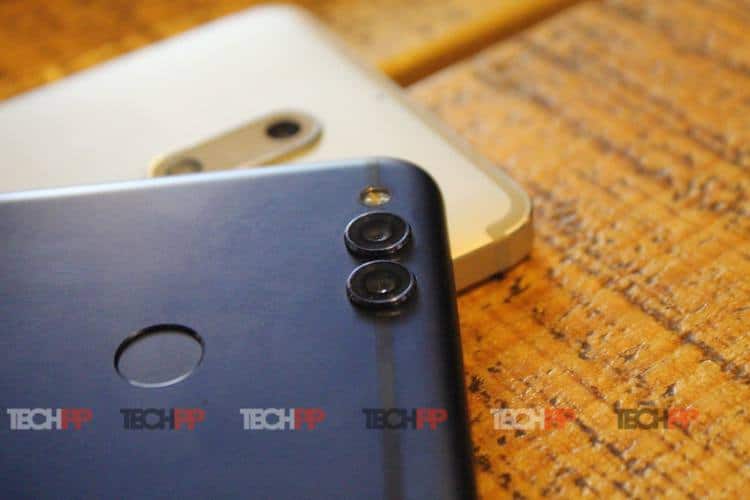 When it comes to numbers, the Honor 7X again has the upper hand with a dual primary camera. The device sports a 16 megapixel and 2-megapixel sensor whereas the Nokia 6 comes with a single 16-megapixel primary camera. Both the smartphones possess an 8-megapixel front-facing camera for selfies and video calls. Both the smartphones did well in the details department. Various shots taken in broad daylight came out well detailed, but both the devices had problems in color reproduction. Many pictures we took had colors that were a little over saturated as compared to the reality. A bit of noise got in the pictures as we moved towards low light environments, but the Nokia 6 handled glare better than the Honor 7X. That said, the Honor 7X came with dedicated bokeh options and also a very feature rich camera UI, both of which allowed us to do more with the Honor 7X’s cameras. The bokeh features on the 7X were sometimes a bit erratic, but because the Nokia 6 does not have any such options, the Honor 7X definitely comes out on top. Both the smartphones took passable selfies, although they were a bit noisy.

The Nokia 6 is powered by a 3,000 mAh battery while the Honor 7X comes with a slightly bigger battery with 3,340 mAh. The Nokia phone can see out a day, working its way through heavy usage. That said, you would have to plug it in every night as it would not go as far as the other day. Under heavy usage, the phone can last up to 12-15 hours, while it can see almost full 24 hours if used moderately. The Honor 7X, on the other hand, can last for a good 24 hours under heavy usage and can see a day and a half when used moderately. Once again, there is only one winner here. 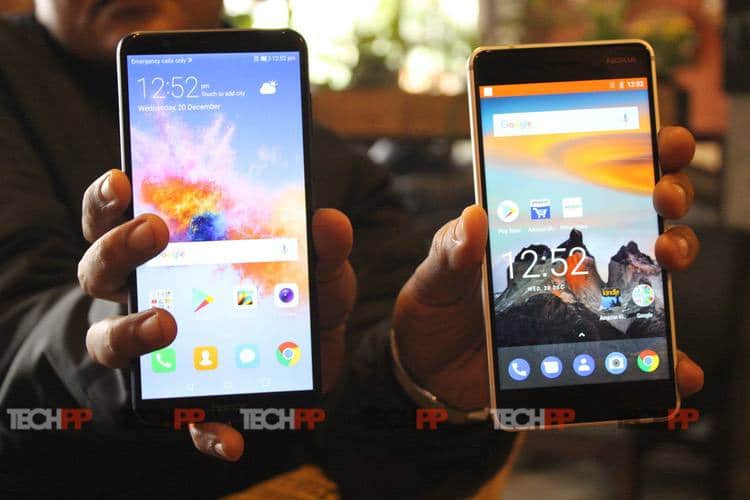 The two smartphones operate on Android Nougat, but while the Nokia 6 works on 7.1.1 (and has been assured an Oreo update), the Honor 7X runs on. Android 7.0 with a skin of EMUI 5on top. The skin comes with many features that make the 7X stand out of the usual stock Android crowd but along with it comes the price of giving up a lot of storage and because the software is heavy, it does slow down operations a bit sometimes. Do not get us wrong, we do like all the extra toppings that Honor has put on the 7X, but some might like the basic stock Android way to things. And we think that with its newer version and assured Android O update, the Nokia 6 just about takes this round.

Which balances the budget better 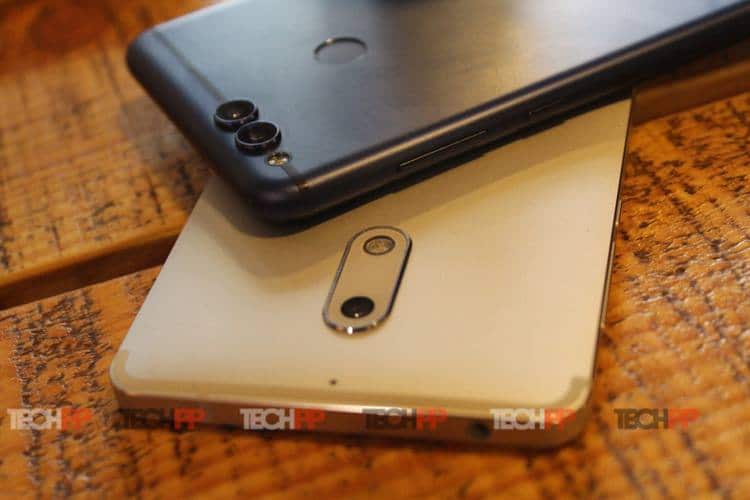 The Honor 7X straight off the bat is the better option between the two phones. Not only does it start at a lower figure, but it also brings more features to the table as compared to the Nokia 6. Dual cameras, bigger display with 18:9 aspect ratio and 4 GB RAM, all make the Honor 7X a little stronger than the Nokia 6.

Both the Nokia 6 and the Honor 7X are great phones in their own rights but this tech face-off has been pretty much owned by the Honor 7X. The smartphone won five rounds out of six. The smartphone is more affordable, offers more features and also looks great. Yes, the stock Android crowd will love the Nokia 6, but all said and done, the Honor 7X wins this face-off, hands down.

Was this article helpful?
YesNo
TechPP is supported by our audience. We may earn affiliate commissions from buying links on this site.
Read Next
Wondershare UniConverter: One Tool for All Your Audio/Video Editing Needs
#comparison #Face Off #Honor 7X #Nokia 6 #Sponsored