Panasonic’s flagship mirrorless camera, the Lumix GH5, has arrived in India and has got some really fancy tricks up its sleeve. Just like its predecessor, the GH4, the camera is aimed at professional photographers and videographers and photography enthusiasts. And the price of the camera makes this clear – the device is priced at Rs. 1,43,990 for the body while pairing it with the 12-60 mm Leica lens will cost you Rs. 1,88,990 in the Indian market. But is it worth the hype or price? 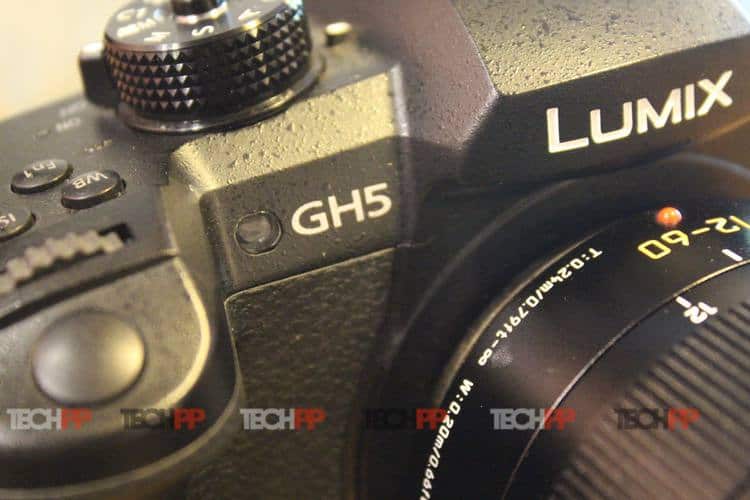 When it comes to the design of cameras, there seems to be really nothing that can change the game. For quite some time now, we have seen similar bodies that are improved a bit every now and then and while it pains us to say so, it does not look like camera design is going anywhere new, anytime soon. The good old (mostly black) blocks with a lens attached to it are pretty much what everyone can think of when we think of a DSLR or a mirrorless camera and guess what? The Lumix GH5 is no different. It pretty much looks like your next door mirrorless shooter. Although with definite changes in design. 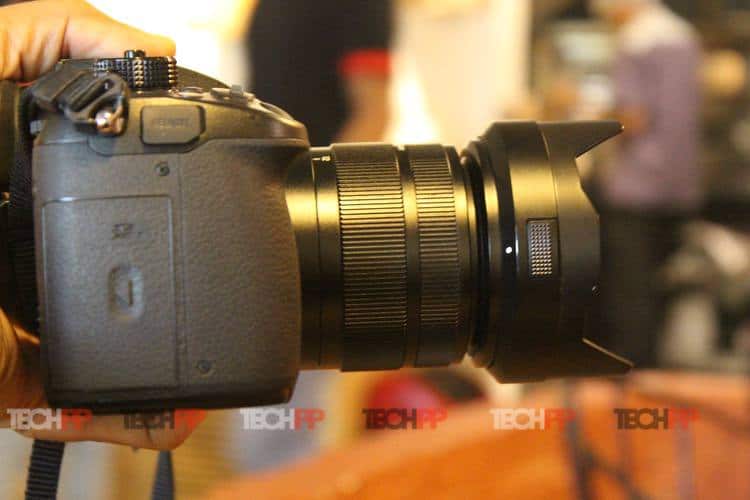 The camera measures 138.5 x 98.1 x 87.4 mm and weighs 645 grams which takes it to the heavier side of the story – a bit of an irony when you consider this is a mirrorless camera one of whose biggest (pun intended) assets is its compactness. That said, it is a rock solid device. The body of the camera is made out of a magnesium alloy with full die-cast front and rear frame. It is not only splash and dust proof but is also freeze proof up to -10 degrees. The Lumix GH5 has a great body grip and solid feel. Although it is a bit on the heavier side, you never find it sliding away from your hands, thanks to its textured body.

And well, it is not one simple body. We have just started out with camera reviews (do bear with us), but the first look of the camera overwhelmed us a little. It just has SO many buttons. Now the plus point of this is that the things that are generally put inside the settings are pretty much up front with dedicated buttons so one can fiddle around with them and they are right there for you to us. You do not have to go around wandering inside the settings options because they are right there on the camera. You can just press the button and change it accordingly. The minus point is that well, we think Panasonic has just gone a little overboard with it. We have used Canon, Sony and Nikon cameras in the past but we did not find the experience as overwhelming – there are buttons everywhere! 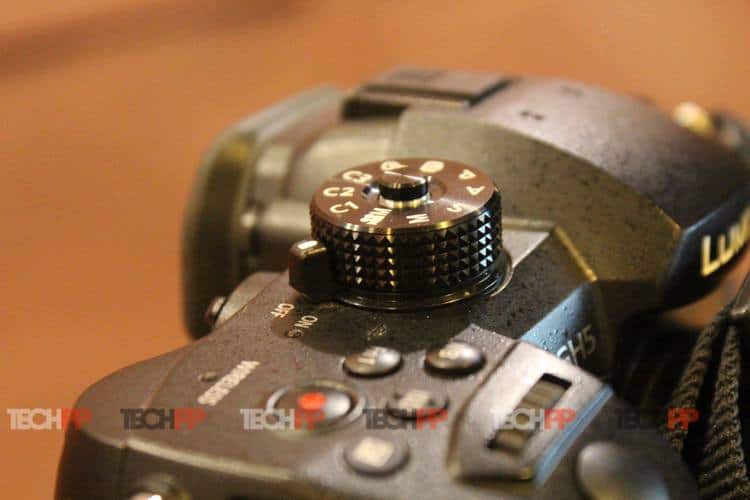 There are buttons for ISO, white balance and exposure on the top while the camera has five (five!!) different functional keys placed at different places that can be customised as per the user. The dial on the left has burst mode, 6K photo, bracketing, self-timer, time-lapse dial while the one on the right has modes including, macro, manual, intelligent auto, auto amongst others. There is also a small button on top of this dial to lock the mode that you have selected.

You have two large dials to change different photography modes, two navigation dials, one menu/setting dial and over ten different buttons. This is not inconvenient or negative in any way, but for those holding a Panasonic camera for the first time, this can be a little intimidating. That said, we got used to it with time. 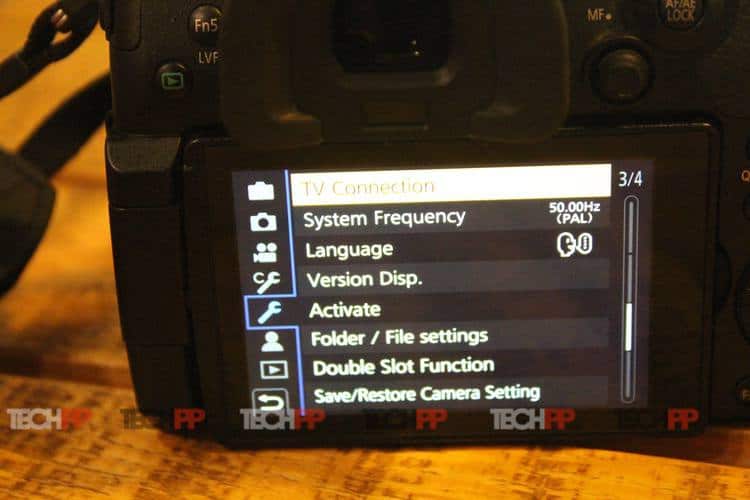 Apart from the plethora of buttons and dials, the Lumix GH5 also has one LCD and an OLED display for the electronic viewfinder (yes, this is a mirrorless camera). One is the standard touch 3.2-inch LCD, which you can use to change settings, as a viewfinder or to review photographs. It offers 100 percent view of the scene being shot. And the other display is the OLED one which is present in the optical viewfinder which can be used to take pictures for those who prefer keeping their eyes close to the camera (you can also review pictures on it). And no, we are not done yet – the camera also has a number of ports for connectivity. The camera has dedicated space for two SD cards, one port for remote control, one for the mic, one USB-Type C port, one micro USB port and a 3.5 mm audio jack.

The Lumix GH5 can be paired with a 12-60 mm Leica lens, which is not too big by itself and complements the camera well. The lens also does not add too much weight to the camera.

All in all, this is one heavy camera that you will have to get used to not just carrying but also using, thanks to that plethora of controls. 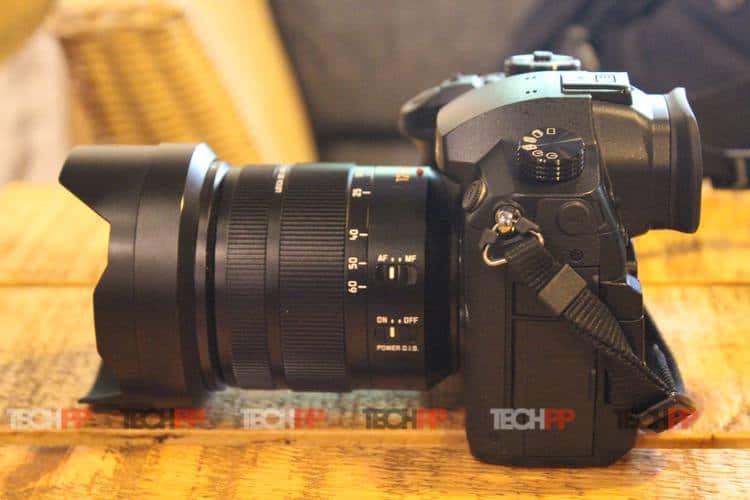 When it comes to specs, Panasonic has pretty much thrown a kitchen sink at the camera. The GH5 has an upgraded 20.3 megapixel digital MOS sensor without low pass filter and also comes with a Venus engine. One of the highlights of Lumix GH5 is the newly added 6K photo mode which allows you to take a picture at 30 fps by taking out the frame with the best timing and details out of a 6K burst file. This kind of shots will be saved as approximately 18-megapixel high-resolution pictures. That said, the camera is not just all about photos, it can easily record 4K videos at 60 fps/50 fps and comes with a wide array of videography options which makes it a pretty good camera for shooting videos. Plus, the camera also comes with increased focus areas. It now has 225 point focused areas which are a long jump from the 49 point focus areas that its predecessor, the GH4 came with. This is some serious camera muscle here, right in the professional territory.

As strong a performer as it looks

Specs and the technicalities done, let’s get to the good part. No matter how intimidating it may have looked initially, we think our experience with the GH5 was pretty great. The camera performs really well. And paired with that Leica lens (which adds some handy zoom to it, and is excellent quality – hey, it’s a Leica!), the camera took some incredible pictures.

The colors reproduced were accurate, and the detailing also was on point. Be it landscapes or portraits; we were rewarded with some brilliant snaps, even when we simply stopped fiddling with modes and went to good old auto. Adding to this is the camera’s ability to capture moving objects. Because the GH5 comes with a 225 point autofocus system, it allows you to track movement better and focus better. And you get similar benefits in the video department as well. A bit of noise creeps in, and the camera becomes a fraction slow when used in low light but there was nothing majorly disappointing. The UI of the camera is smooth, but we think the company needs to work on it to make it a bit more simple (we did struggle with those buttons again and again, but we are sure the pros will manage it much better). 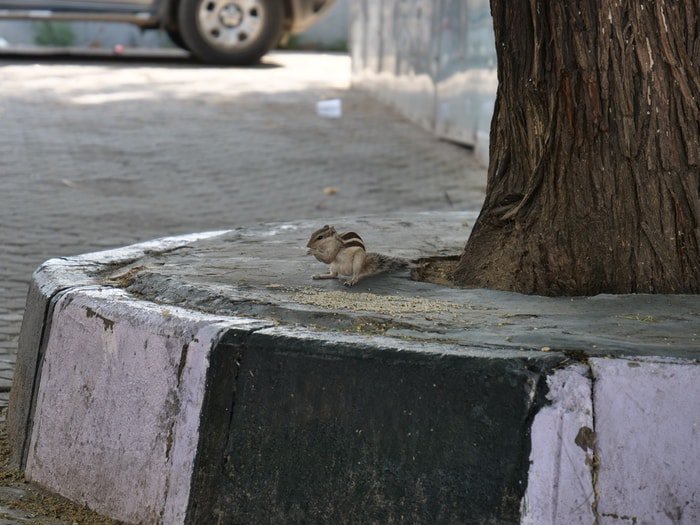 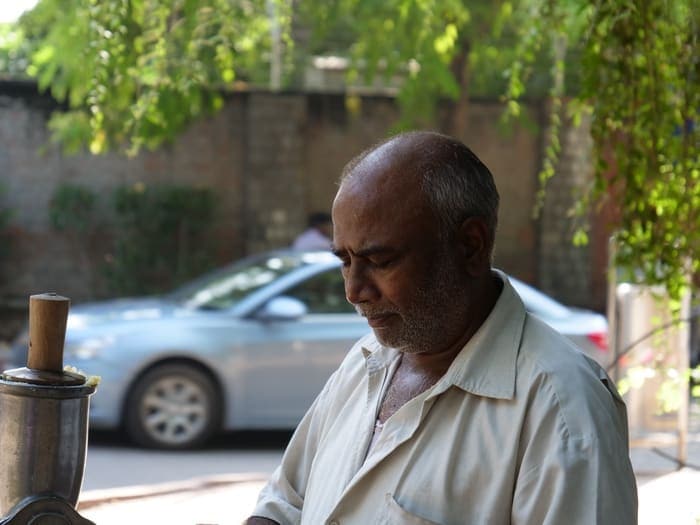 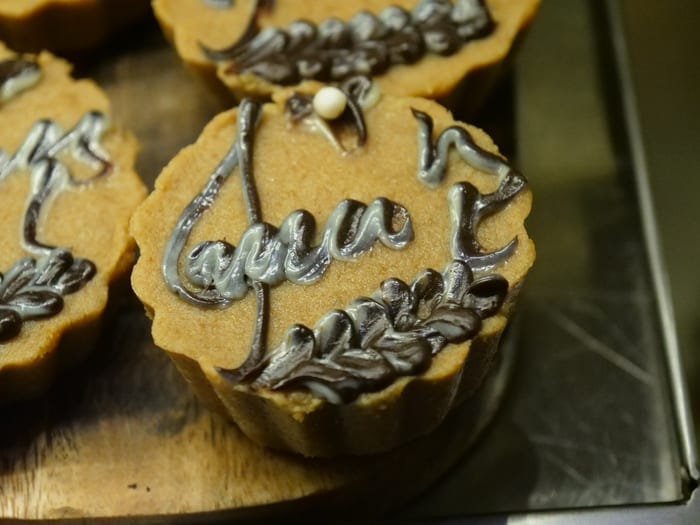 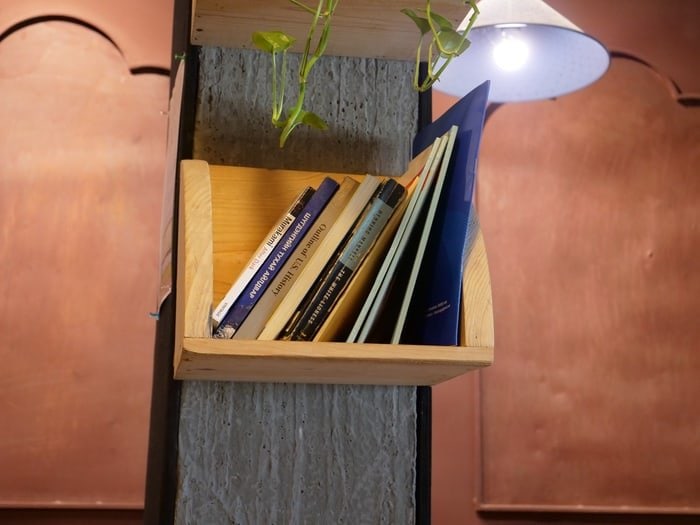 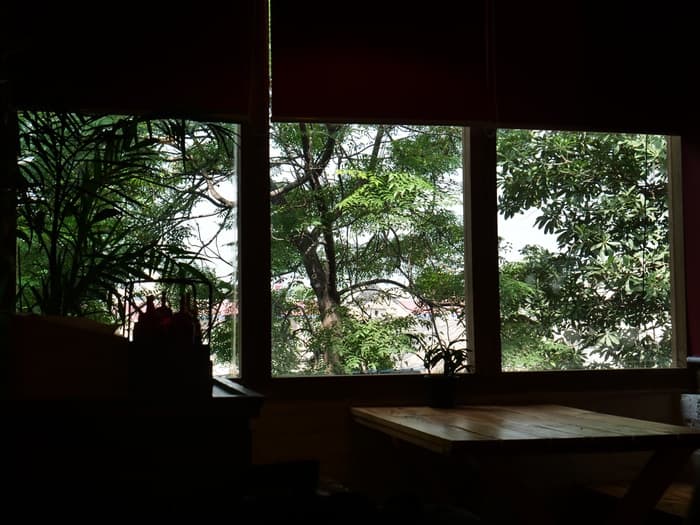 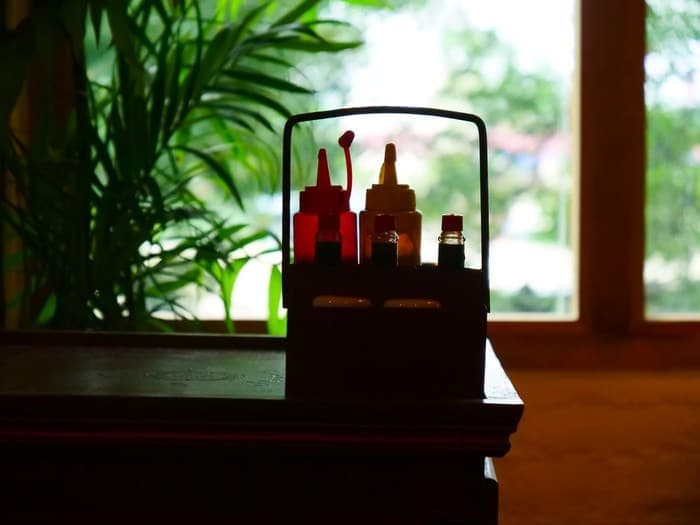 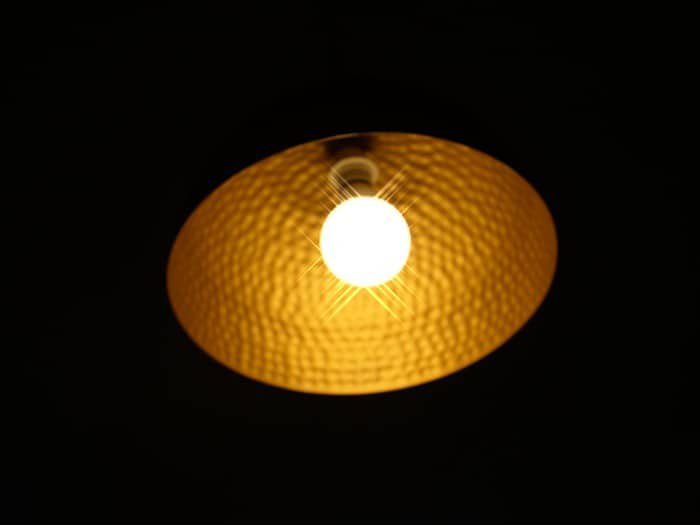 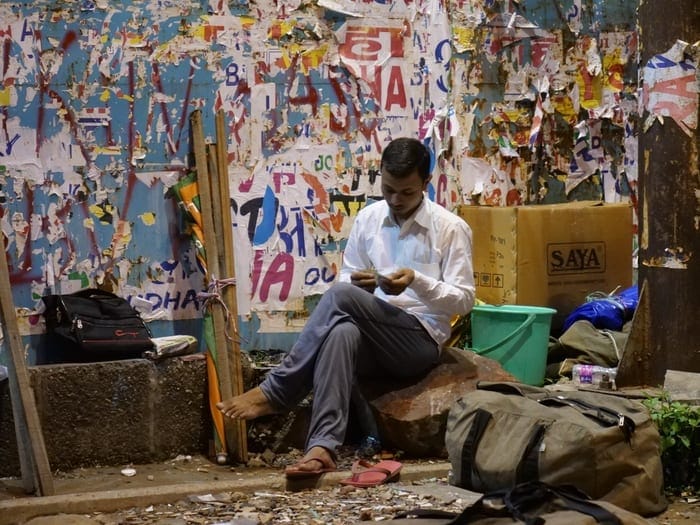 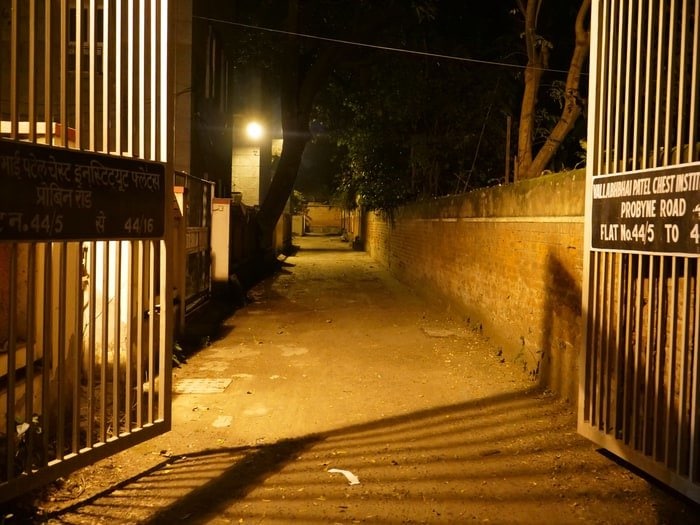 The camera scores well in the connectivity department. It comes with Bluetooth, Wi-Fi, and a USB Type-C port to help you transfer the data – though to transfer your data over Wi-Fi, you will have to create a Panasonic Lumix account first. The camera is also equipped with double SD card slots. The battery on the GH5 is also impressive and can last for a while even when you are shooting all day continuously – you can get close to 350 shots on a single charge. This is a heavyweight performer all right.

Lots of value, lots of money 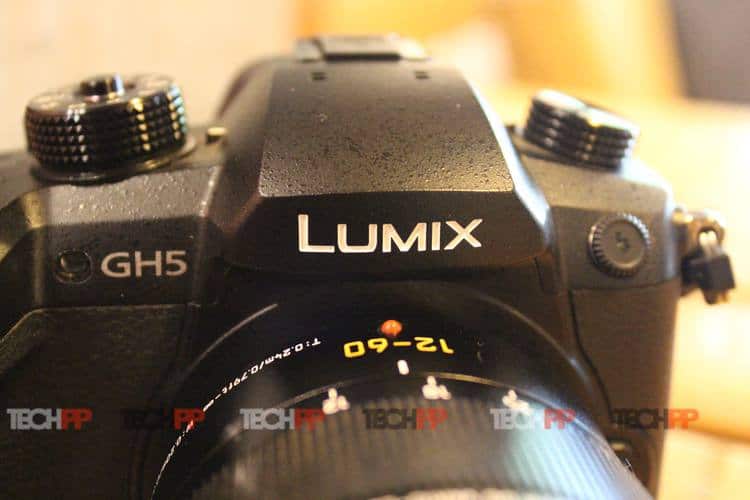 There was a lot of hype in the camera world about the GH5, and guess what, it lives up to it. The mirrorless camera has not only taken its photography game up a notch but has also created a buzz in the market because of its videography skills that seem pretty much next level. We will not really suggest this one for people starting out in the field of photography because it looks rather intimidating and might put beginners off. However, for those with a bit of experience in hand and the will to invest around Rs 2,00,000 in a great camera, the Lumix GH5 will not disappoint. That said, at that price point, it will find itself going up against some full-frame competition from the other big player in the mirrorless department, Sony. And yes, there are those who will look at high-end devices from those two old favorites, Canon and Nikon. It has the muscle to hold them off, though. Which is saying something.

Was this article helpful?
YesNo
TechPP is supported by our audience. We may earn affiliate commissions from buying links on this site.
Read Next
Skullcandy Mod Review: Betting on doing the basics well
#DSLR #Leica #Lumix GH5 #Panasonic #review