The screenshot feature has shaped up as an integral tool/feature offered by almost all the mobile operating systems. For a while now, the custom ROMs and the OEM overlays have modded the screenshot feature to make it more useful. The latest screenshot app on the Google Play Store is from HTC, and yes, as the name suggests, it does help users capture screenshots but is not limited to just that. The HTC Screen Capture lets you add/edit the text and drawings. 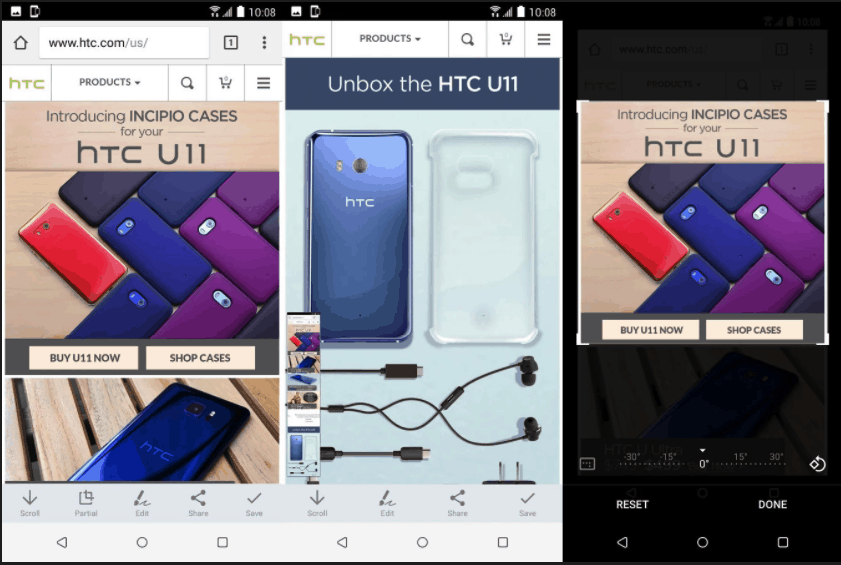 Once the Screen Capture app is fired up, it displays a prompt with options like Scroll, Partial, Edit, Share and Save. With the Scroll option, users can preview the screenshot before saving it. However, the best part is that the users can choose more content by simply scrolling down. The Scroll option means a great deal for capturing those extra large screenshots.

The Partial option is nothing but a rebadged cropping tool. This tool lets you crop the screenshot while the Edit option will let you add both text and drawing elements. Its worth mentioning that the app also offers a “Draw” tool. With this tool, one can add marker, crayon, paintbrush, pen, and eraser along with the usual set of color and thickness option. In the meanwhile, the text option seems to be pretty bland as it comes with nothing more than a simple text editor.

The HTC Screen Capture is apparently available only for the U11 series, however, you can always head over to apkmirror and check out if the app is compatible with your HTC device. Smartphone manufacturers including the likes of Google, Essential and Samsung are coming up with apps that are exclusive to their devices. I personally doubt if apps like this will help the device gain an edge, especially since many such similar third-party apps are already available on the Play Store.

TechPP is supported by our audience. We may earn affiliate commissions from buying links on this site.
Read Next
How to Take a Screenshot on Chromebook [3 Ways]
#HTC #HTC U11 #Partial Screenshot #screenshots