With the launch of the new Nokia 2018 range drawing closer, HMD Global has decided to give a price cut to the original Nokia 5 in India. Besides, the Finnish firm has markedly slashed down the price of its flagship Nokia 8 smartphone as well. 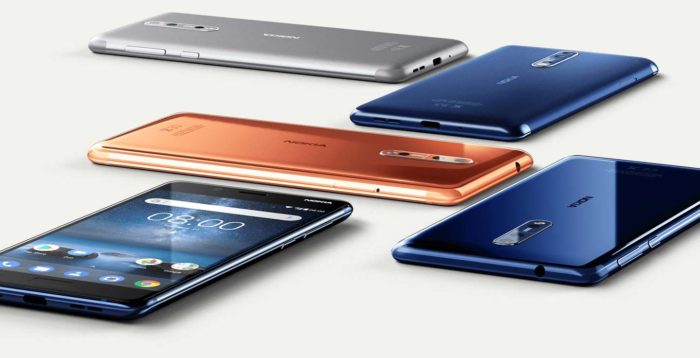 The Nokia 5 and Nokia 8’s retail prices have dropped by Rs 1,000 and Rs 7,000 respectively. The price drop is effective starting today via major brick and mortar stores across the country. Incidentally, only the 3GB version of the Nokia 5 seems to have received the price cut. It is now available at just Rs 12,499 which is same as that of the 2GB variant of the smartphone. While no official words regarding the price of the Nokia 5 (2GB) is available as of yet; it is believed to receive a similar treatment sooner than later.

The sudden price cut of Nokia devices was possibly triggered by the sluggish sales in the country. HMD Global’s Nokia 5 failed to match up with the price to performance ratio of the Redmi Note 4, whereas the Nokia 8 simply went unnoticed, all thanks to fierce competition from the likes of OnePlus 5T and Honor View 10. The former was, in fact, the second highest selling smartphone in the final quarter of last year.

After the price cut, the Nokia 8 is now available at a price of Rs 28,999. This makes it very competitive when compared to its competitors, especially the Honor View 10 or the flagship killer from OnePlus.

Just to recall, the Nokia 8 comes with an aluminum unibody chassis and features IP54 water and dust resistance. It packs a 5.3-inch QHD LCD display and a Qualcomm Snapdragon 835 octa-core processor. The camera department of the flagship is manned by dual 13MP Carl Zeiss shooters and a 13MP selfie camera.

The Nokia 5 on the other hand, rocks a 5.2-inch HD display and a Snapdragon 430 octa-core chip. It now runs on Android Oreo 8.0 after receiving a major OS update last year. We can’t help but wish HMD Global had launched these phones at these killer prices last year.

Was this article helpful?
YesNo
TechPP is supported by our audience. We may earn affiliate commissions from buying links on this site.
Read Next
Nokia Power Earbuds Lite Review: Connecting through Clear Audio against Tough...
#nokia #Nokia 5 #Nokia 8