Google has today introduced two new features for its Flights platform, both of which will help you get through some of the biggest annoyances of air travel. With the power of machine learning, the search engine will now tell you whether an upcoming flight will be delayed or not before the airline officially announces it. In addition to that, it will neatly breakdown what amenities does a particular package offers. 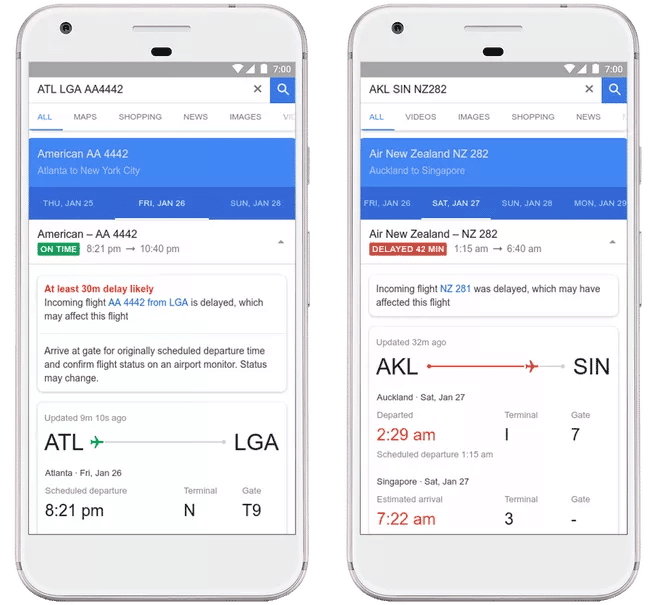 Starting from today, whenever you look up a flight number, route or airline, Google will display a warning if its algorithms are anticipating a delay. To achieve this, the company will scour through a bunch of historical data to form a pattern. It will consider factors such as the location, weather forecasts, and information from the aircraft’s previous trips. If the outcomes are at least 80 percent sure that the flight will be postponed, Google will throw in an alert in the search results.

Of course, you can not rely on these suggestions entirely and Google itself recommends reaching the airport on time regardless. However, it is always nice to have a heads up. On top of this, though, Google Flights will continue to show the official timings and delays the airline has announced or confirmed.

The other feature concerns airline companies’ profound ways to lure in customers with cheaper rates by parring down various perks like baggage allowance, snacks, what have you. However, booking platforms usually fail to list these cutbacks in a more understandable manner. Google thinks it can fix that and will now display exactly what is and isn’t included in the fee. It’s only compatible with a handful of airlines, though for now. This includes Delta, American Airlines, and United Airlines. Google has been consistently adding new, unique features to its Flights platform for the past year. It can even notify you when the fare of a particular flight has declined and predict when it will be cheapest.

Was this article helpful?
YesNo
TechPP is supported by our audience. We may earn affiliate commissions from buying links on this site.
Read Next
How to Fix Google Chrome Translate Not Working
#google #Google Flights #Machine Learning