Everyone likes to spend less amount for what they are getting. More benefits, lower price has fueled a myriad of upstarts, businesses and well, smartphone companies. The idea of offering a lot more at a relatively lesser cost has sort of become a competition in the phone market. The term “affordable flagship”, thus, was spawned a few years ago.

The result? Almost every smartphone OEM is focusing on the products they sell under the Rs 35,000 price bracket. Be it OnePlus, Xiaomi, Huawei, and even HMD Global’s Nokia. However, one company has remained largely absent in this segment — Samsung. Yes, the Korean juggernaut which still holds the majority of the market share. But it has begun bleeding numbers now, and it’s making changes left and right to reestablish its unprecedented reign. 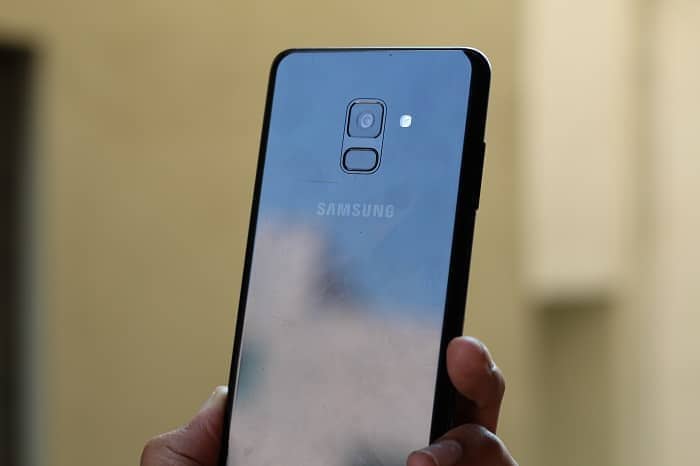 The company’s new Galaxy A8+ represents a part of this profound shift. It comes with nearly all the features one would usually expect from a phone in this range and yet, priced the same as a few of its fellow opponents. In addition to that, the Galaxy A8+ is on a level playing field by being exclusively available only via an online channel (Amazon). But does it manage to prove its worth outside the features sheet? After spending over a week with the phone, we think we have an answer. Therefore, here’s our full review of the Samsung Galaxy A8+.

[pullquote]In a word, the Galaxy A8+ is beautiful[/pullquote] Samsung’s A-series has always been known for its impressive build and design, and the new Galaxy A8+ surely lives up to the expectations. It’s entirely built out of glass except for the aluminum frame which brings a bit of a grip to the otherwise slippery exterior. The phone follows the company’s higher-end design language and resembles the flagship Galaxy Note 8 smartphone. In a word, the Galaxy A8+ is beautiful. From the outside, the phone feels every bit as premium as the price Samsung is asking for and a little more. 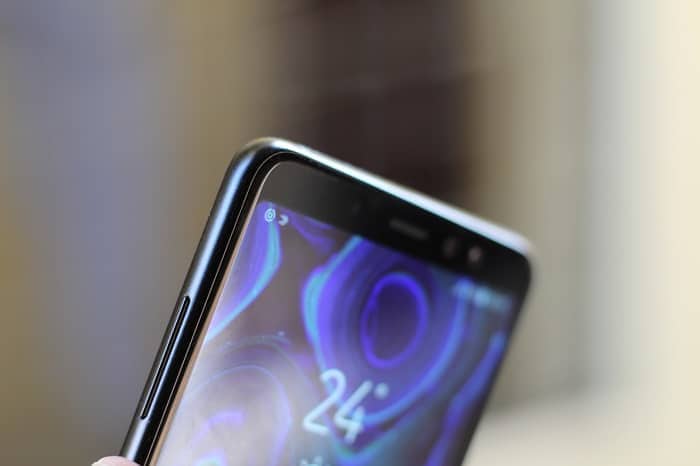 It’s also on the heavier end of the spectrum at 191 grams thanks to the all-glass body, a hefty battery pack and of course, the enormous screen on the front. Add that to the tall display, and you’ve got yourself a rather inconvenient phone. Mind you; it’s still surprisingly handy than I thought it would, probably because of the 18.5:9 aspect ratio. 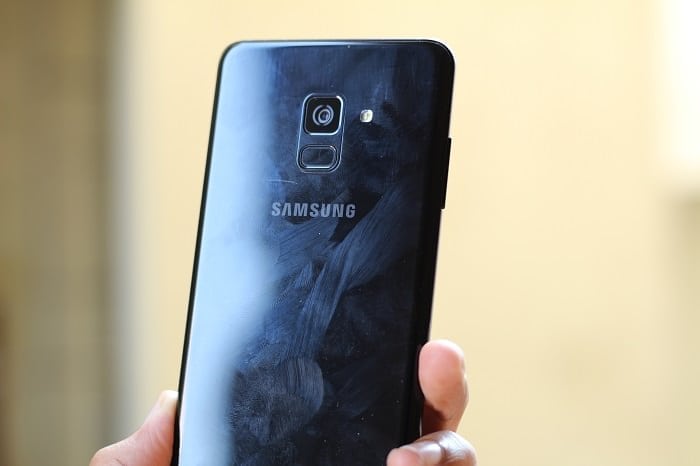 Moreover, you will have to clean a ton of finger smudges at the end of a day, but I guess that’s the price you have to pay for glass design. The situation can be curbed to some level if you opt for the Gold variant or a case, though. One of the major highlights of the Galaxy A8+ is the fact that it’s IP68 certified. This essentially means it can survive splashes of water and even a drop in the commode.

Another cornerstone of the Galaxy A8+ lies in what Samsung does best — making big, bright, and vibrant screens. The Galaxy A8+ inherits all of those perks and comes with a 6-inch Super AMOLED display which features a resolution of Full HD+. There’s also a layer of Corning Gorilla Glass present, but you’re going to slap a tempered glass on it anyway, so that does even matter? 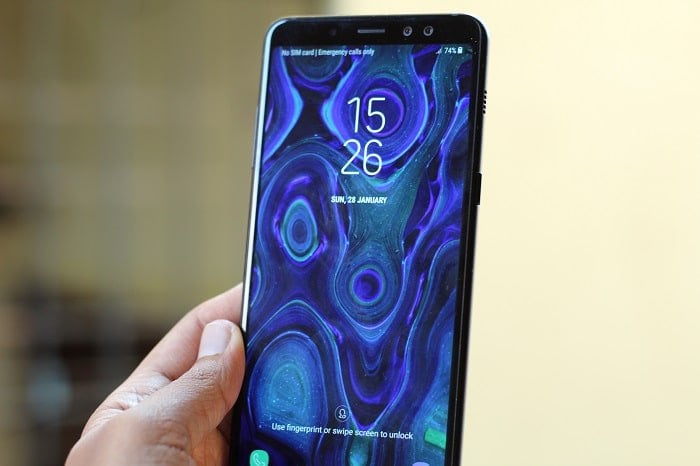 The display on the Galaxy A8+ is sharp and comes with ample brightness to be visible under any circumstances. Although out of the box, I did find it excessively vibrant and saturated. Fortunately, you can tone it down in the settings. But I’m told users tend to prefer the default setting. Opting for the 18.5:9 aspect ratio has allowed Samsung to scrap off every unnecessary bezel from the front and the outcome is stupendous just like the company’s flagship phones. In addition to that, the screen can remain always-on for showing you quick bits of information such as notifications, time, alarms and more.

[pullquote]The Face unlock doesn’t work as advertised. It works from a specific angle and relatively slower than others[/pullquote]In addition to the rear-mounted fingerprint sensor, you can unlock the Galaxy A8+ with your face as well. Unfortunately, it doesn’t work as advertised. For starters, you will have always to stare it from a specific angle. Moreover, it fails to recognize me even under areas which are just remotely dim. Thankfully, though, you can not fool it with just a picture. The fingerprint reader, on the other hand, functions flawlessly. It is located beneath the camera sensor which is an odd decision, and you will, initially, end up swiping on the lens a lot.

Another poor positional choice — the speaker. It’s present slightly above the power button on the right side which is the place my hands usually rest on when I’m using the phone. Even if I’m holding the phone with one hand while watching videos in landscape mode, the speaker ends up being blocked. It’s not a well-thought decision is all I’m saying. 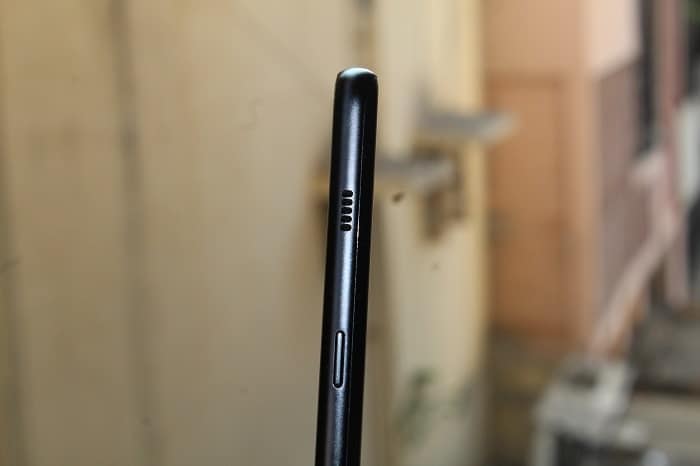 [The call reception is amongst the best I have ever experienced on a phone.[/pullquote]On the bottom, you’ll find a USB Type-C port and a standard headphone jack which is nice. There’s a dedicated SD card slot, and the phone is compatible with two SIM cards. The reception was the best I’ve ever experienced on a phone. That being said, you should know I have not tried any of the recent high-end phones except for the Pixel 2. But I’m quite sure you can’t have a better quality than this.

The Galaxy A8+ runs on Samsung’s custom software which is built on top of Android Nougat (no Oreo yet, sadly). And I’m glad to report that it’s much better than it ever used to be. Most of the granular settings are now tucked away deep in the settings like Smart Stay, Gaming Mode, and more. All the Samsung bells and whistles are present as you’d expect including Samsung Pay, themes, dual messenger which lets you run two WhatsApp accounts, secure folder, what have you. It’s still a bloatware galore, and you can not uninstall any of them including Facebook, Microsoft’s entire productivity suite and a bunch of Samsung’s own. 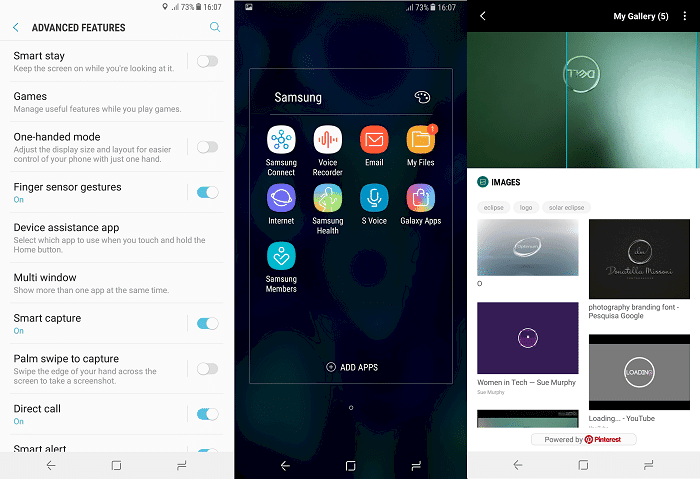 [pullquote]Samsung Experience (a.k.a Touchwiz) was indeed a surprisingly pleasant experience.[/pullquote]Overall, though, and I can not believe I’m saying this, Samsung Experience was indeed a surprisingly pleasant experience. The software brings a modern, refreshing take on various interface elements. For instance, the subtle animating background in the calling page or the edgy navigation keys. The only letdown was the emoji set which is borderline horrendous. A lot of emojis just look a lot different on the Samsung phone than on the one at the receiving end which can be an issue at times.

Under the hood, the Galaxy A8+ is powered by Samsung’s homegrown Exynos 7885 octa-core chipset with 6GB of RAM, 64GB internal storage, and a Mali-G71 GPU. The phone performs exceptionally well whether it’s a resource intensive game or just browsing social feeds. It does suffer from this one weird bug which paralyzes the phone completely. The only fix I could find for it is an old-school reboot with the button combination. It’s not as regular as to be a deal breaker but Samsung certainly needs to address it in the next update.

The 3500mAh battery is equally impressive as the Galaxy A8+ can easily last more than a day even on heavy use. It was able to produce consistently a screen-on-time of over five hours. Plus, the phone supports quick charging as well and can be juiced up to a hundred percent in roughly 90 minutes. 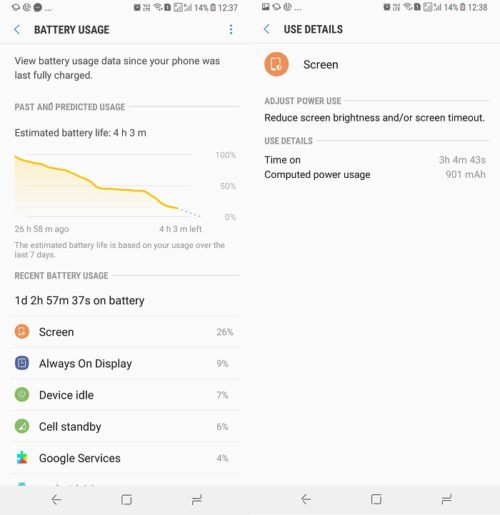 A Mixed Bag of Cameras

The camera setup on the Galaxy A8+ is primarily built for users who prefer clicking selfies over anything else. The phone, therefore, features two sensors on the front and only a single at the back. 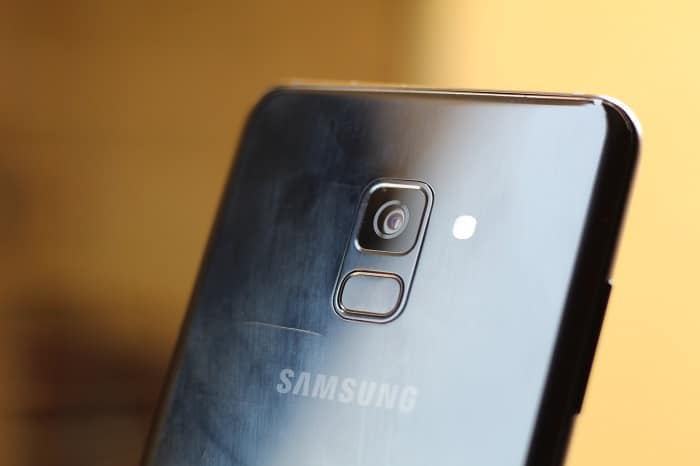 The rear 16-megapixel f/1.7 lens manages to capture excellent pictures in the majority of scenarios irrespective of whether you’re indoors or outdoors. Images taken on the Galaxy A8+ turn out detailed and have accurate contrasts. They’re neither oversaturated, nor dull. The phone is able to figure out the right exposure setting even under direct sunlight which is quite commendable. Whenever it doesn’t, the HDR mode can be kicked in. It is a little on the aggressive side, however, not as much as to ruin the shot. 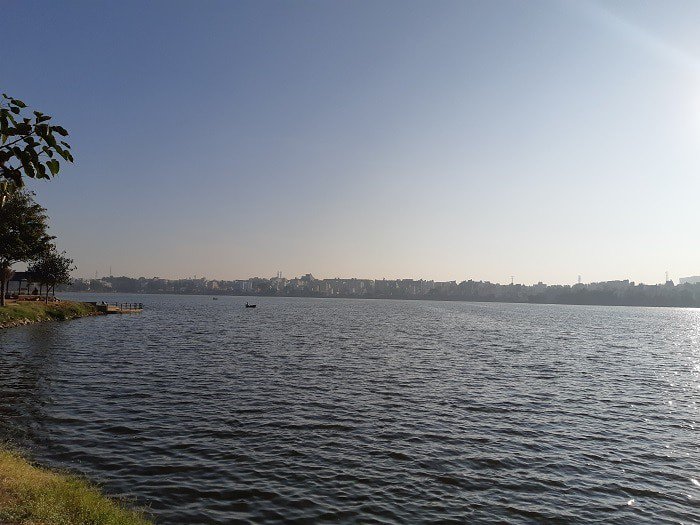 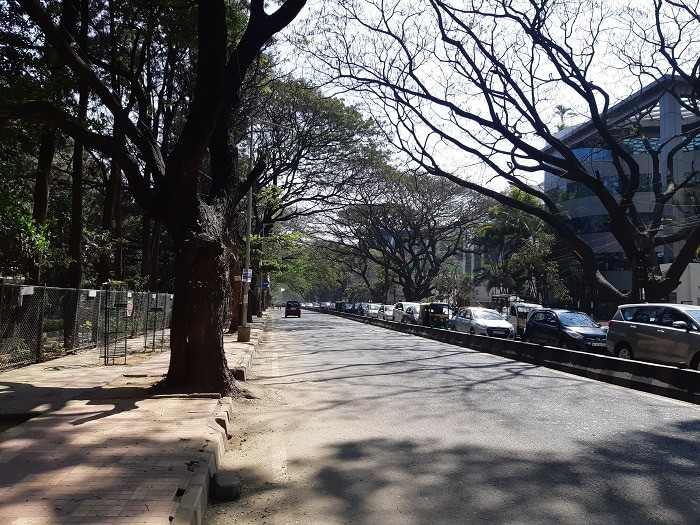 The Galaxy A8+ does struggle in low-light situations. I was trying shoot a concert, and the phone just kept going off-focus all the time. It wasn’t an entirely dark environment either. The only way the Galaxy A8+ is able to click acceptable pictures during the nighttime is if you and the object both are at a standstill. Even in those, you’ll have to settle with soft borders and noise. 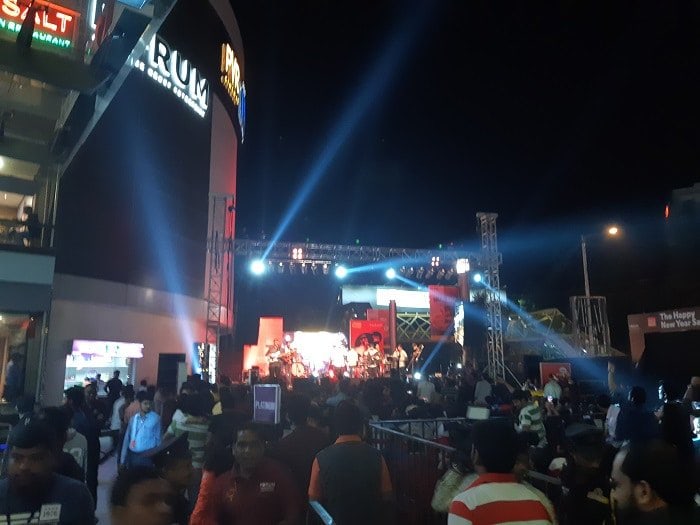 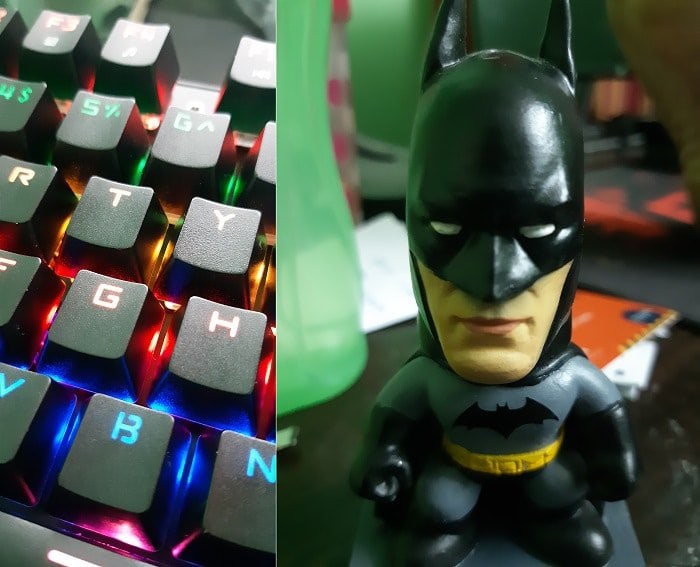 The lack of Optical Image Stabilization is a lot more apparent when you record videos. The clips, while feature passable details and colors, are shaky most of the times. It also can not record in 4K and neither does it have the Slow Motion mode which are certainly significant drawbacks considering the price and competition. In addition to that, the phone suffers from the infamous “focus hunting” issue which leads to stutters in your clips whenever the phone refocuses. 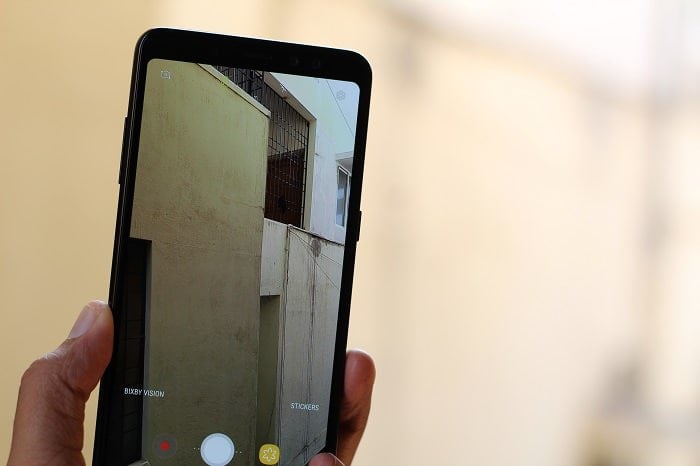 On the front, you’ll find two sensors — one regular 16-megapixel and a secondary 8-megapixel lens for producing live bokeh effects. While the selfies taken in daylight were mostly great, the pair’s drawbacks begin to appear as the lights go down. For starters, it faces difficulties with the edges and exposure. The depth-of-field can, at times, seem artificial too. That being said, it is on par with the competition, all of which tend to struggle with dimly lit scenarios. 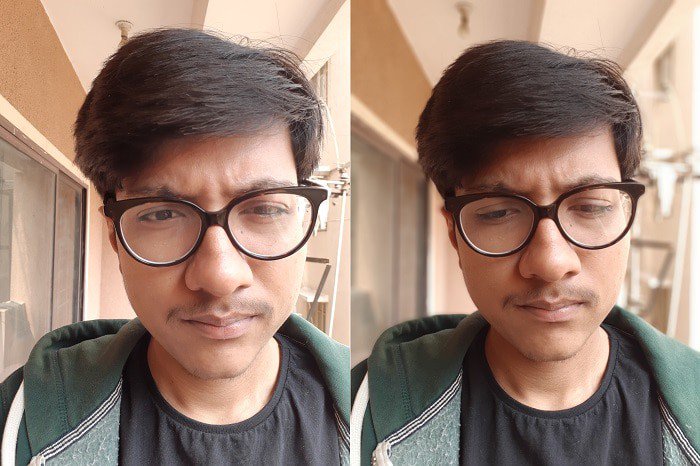 Rounding that off is the plethora of settings and modes Samsung bundles. This includes animated stickers, Bixby Vision (which literally never worked once for me), Manual, and you can even download more. The bottom is that the camera on the Galaxy A8+ is right at the top in its league and at times, a little above them as well. 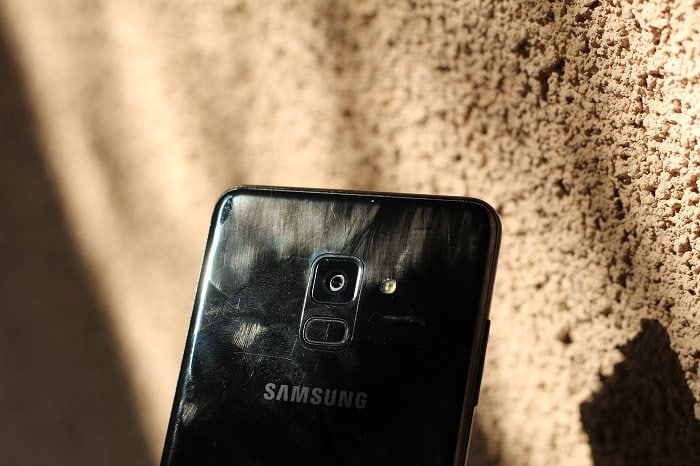