Nearly six months after introducing the Mi Mix 2, Xiaomi has today announced an ‘S’ upgrade to the series. The new Mi Mix 2S takes the imperfect Mi Mix 2 and fixes much of what ailed it. That includes the addition of a more compelling set of cameras, a grippier exterior, and topping all that up are a few sprinkles of AI here and there. We got to spend some time with the phone, here’s what we think of it.

When I first held the new Mi Mix 2S, I was rather disappointed. Two of my biggest pet peeves with Xiaomi’s Mi Mix series are still there — the awkwardly placed selfie camera on the chin and a greasy, slippery back that demands a case. The Mi Mix 2S lives up to its ‘S’ moniker and hence, doesn’t feature any radical changes from the outside, at least.

There is one significant alteration, though. The curves at the left and right edges are now flattened out so that the phone is much easier to hold. Other than that, you will find a familiar ceramic exterior coupled with an aluminum chassis that still looks and feels every bit as premium as the phone’s price and a little more. 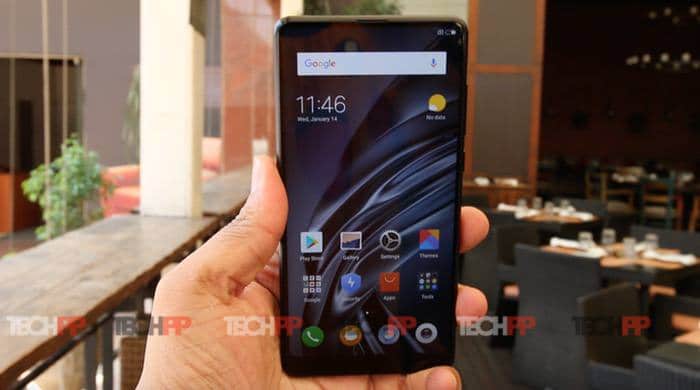 The Mi Mix 2S also inherits the same 5.99-inch Full HD+ screen from its predecessor which leaves very room for bezels around the sides excluding the bottom. It’s still an IPS panel, though. Underneath, the Mi Mix 2S comes with all the power you’ll need.

In 2018, that means a Snapdragon 845 processor, 6 or 8GB of RAM, 64 or 128 or 256GB of internal storage which is not expandable, and a 3400mAh battery which can now be charged wirelessly through a Qi accessory. Xiaomi has preloaded Android Oreo with their latest MIUI 9.5 on top. The software also offers the ability to switch on navigation gestures which let you move around without the onscreen keys.

In addition to the rear-mounted fingerprint reader, the Mi Mix 2S can also be unlocked with a face. And no, you won’t have to flip the phone around to authenticate. Xiaomi says the feature functions even with the selfie camera on the chin. Another software highlight is the support for Google’s Augmented Reality platform, ARCore. There are not a ton of apps and games available right now, but whenever they do, the Mi Mix 2S will be able to run them.

The new Mi Mix 2S’ cornerstone is, however, those two 12-megapixel camera sensors on the rear, one of which is a telephoto lens capable of 2X optical zoom. The primary snapper also has a 4-axis OIS module which should help the phone produce more stable clips and better outcomes in dimly lit scenarios. Like every other recent phone, the Mi Mix 2S also has a Portrait Mode and an AI-powered scene detection feature which automatically tunes the camera’s setting when you are, for instance, clicking a picture of a pet or food. 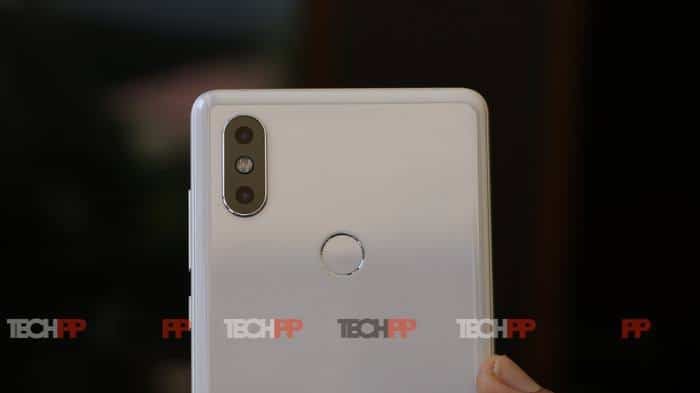 In our brief testing, the shots Mi Mix 2S clicked were indeed dramatically better than the Mi Mix 2 and certainly on par with any modern smartphone. Moreover, the Portrait Mode did surprisingly well with figuring out the borders and lighting giving us natural and clear pictures. But yeah, to see how the phone fares in other situations, we will have to test it a lot more and that will happen whenever Xiaomi decides to make the phone available in India.

The Mi Mix 2S brings a breath of fresh air in a segment which will be soon swamped with lookalikes. It’s unique, finally has a compelling set of cameras, and doesn’t cost as much as an average flagship. Of course, it all comes down to how well these upgrades translate in everyday use but considering what we saw in our quick spell with it; we’re quite optimistic.

Was this article helpful?
YesNo
TechPP is supported by our audience. We may earn affiliate commissions from buying links on this site.
Read Next
With Redmi A1, is Xiaomi Resurrecting the Android One Dream, but Without Google?
#First Cut #Mi Mix 2S #xiaomi