HMD Global’s Nokia today introduced yet another Snapdragon 636 powered budget handset — the Nokia X6. The new smartphone’s biggest highlight is a notch-equipped screen and an aesthetic which seems largely inspired by Apple’s iPhone X. Like others, the Nokia X6’s most obvious competitor is Xiaomi’s Redmi Note 5 Pro. Here’s how they differ on paper. 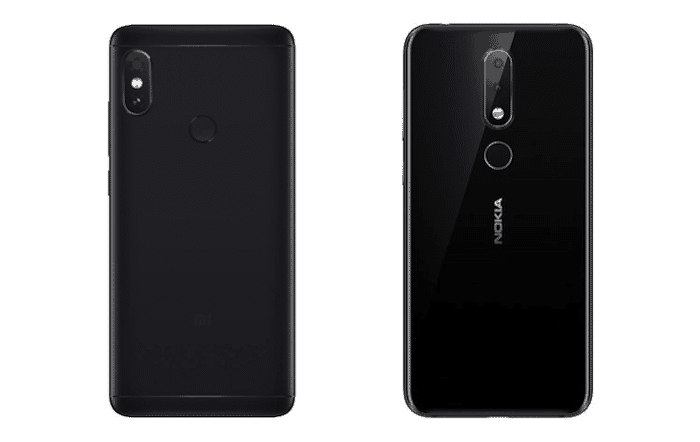 While the Redmi Note 5 Pro features a more conservative all-aluminum exterior, the Nokia X6 opts for a glass body that will certainly help it stand out among its fellow peers. The Redmi Note 5 Pro, however, is a lot heavier (180g vs 150g) thanks to its larger battery.

Both the phones have a tall nearly 6-inch 1080p displays on the front. However, since the Nokia X opts for a notch, the bezels around the sides are much narrower on it than the Redmi Note 5 Pro. Because of that, it also has a 19:9 aspect ratio of 18:9. Both of them have a layer of Gorilla Glass for protection as well.

Under the hood, as I mentioned earlier, the Nokia X6 and Redmi Note 5 Pro have a Qualcomm Snapdragon 636 octa-core chipset. There are 4 or 6GB RAM variants available in both the cases. Although the Nokia X6’s base model has 32GB internal storage, while the Redmi Note 5 Pro starts at 64GB. Both of them are compatible with MicroSD card and sport a hybrid slot.

The Redmi Note 5 Pro features a custom Android skin, MIUI and comes preloaded with a dated 7.1 build. The Nokia X6, on the contrary, has a near stock interface which is based on the latest Android 8.1.

Was this article helpful?
YesNo
TechPP is supported by our audience. We may earn affiliate commissions from buying links on this site.
Read Next
Nokia 6.1 Plus Review – Very Notable, Very Notchable
#Nokia X6 #Xiaomi Redmi Note 5 Pro