Oppo seems to have trained its sights on reclaiming its declining share in the budget smartphone segment and that essentially involves one primary goal — dislodge Xiaomi’s Redmi series in the same way it has everyone else. Don’t believe me? Just read aloud Oppo’s new sub-brand’s name, only slower. Yes, RealMe sounds unapologetically a lot like Redmi. Moniker aside, is its first product — the RealMe 1 competent enough to take on the country’s one of the most sought-after smartphone, the Redmi Note 5 Pro? Let’s find out in this in-depth comparison of Realme 1 vs Redmi Note 5 Pro.

Before that, however, here’s a brief overview of how Xiaomi managed to sneak past Oppo on the charts. While the latter was busy spending a shedload of money on marketing and retailer margins, the former gradually built its community and image by offering a range of well-balanced phones at remarkably affordable prices exclusively on online platforms.

When Xiaomi was done establishing a strong foothold there, the company decided to enter the offline market where its line of phones was already making waves through unofficial channels. In the midst of all of this, Oppo fell down to the fifth spot and hence, it’s now invading the online territory in a hope to capitalize on others’ out-of-stock predicaments with its exhaustive local manufacturing chain. 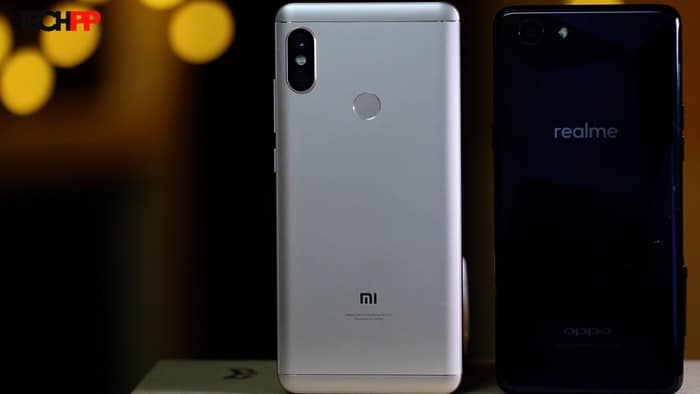 The most glaring differences between the Redmi Note 5 Pro and the RealMe 1 are apparent as soon as you put them side by side. While the Redmi Note 5 Pro comes with a familiar and conservative all-aluminum exterior (except for the plastic bands near the antenna on the rear), the RealMe 1 flaunts the company’s signature build which might seem like glass but is actually made out of plastic and a polymer composite material.

Even though it’s laden with fingerprint smudges, the RealMe 1’s design is the one that stands out with its shiny sheen especially if you buy the Diamond Black edition. The Redmi Note 5 Pro, on the contrary, scores points in the build department. It’s a lot sturdier and the extra weight conveys a satisfying sense of density. In addition to that, the Redmi Note 5 Pro has an arched rear that sits comfortably in your palm and makes it ergonomically a better phone here as compared to the RealMe 1’s flat back. The Redmi Note 5 Pro does have one drawback — there’s a protruding camera bump and as a result, the phone wobbles on flat surfaces.

Winner: For design, it’s the RealMe 1 but for the build quality, Redmi Note 5 Pro. 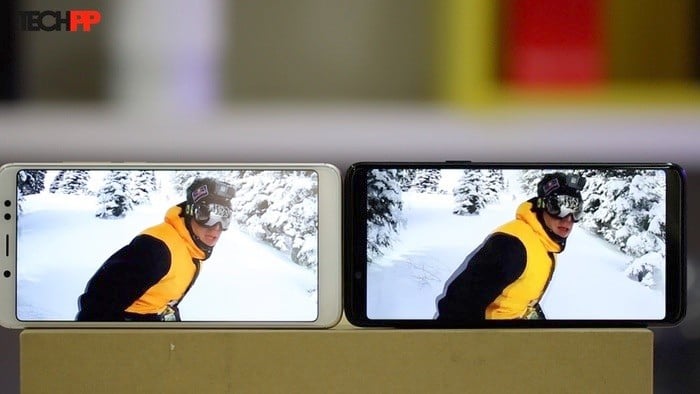 Both the phones come with a 5.99-inch 1080p LCD screens. They are 18:9 panels in both the cases which means you won’t find a whole lot of bezels on the front in either case. However, the space around the display is much narrower on the RealMe 1. The RealMe 1’s screen is also the more accurate of the two but the Redmi Note 5 Pro has a brighter one. While initially, we thought only the Redmi Note 5 comes with Gorilla Glass protection, Realme has now claimed that their phone too comes with Gorilla Glass 5. 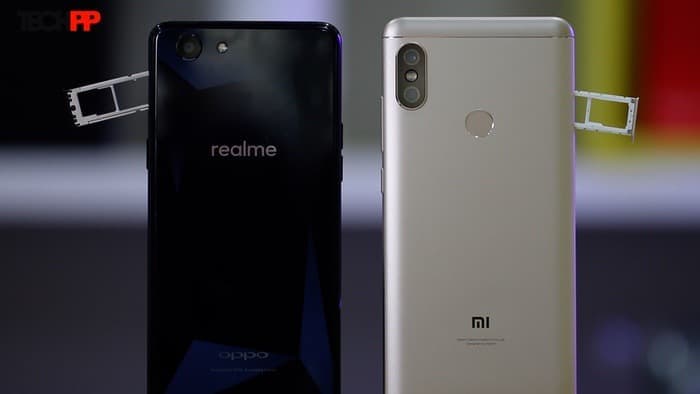 There are a handful of differences when we discuss the rest of the build as well. The most important one of those is the lack of a fingerprint sensor on the RealMe 1 which I also feel is its biggest shortcoming. Instead, Oppo expects you to entirely rely on a face unlock feature which is a little too inconsistent to be the primary means of authentication. On the Redmi Note 5 Pro as well, the face unlock is nothing more than a gimmick but there you, at least, have another biometrics option.

The RealMe 1 does have its own upsides, though. For starters, it has a dedicated MicroSD card and is even compatible with Dual 4G VoLTE, something which is entirely absent on the Redmi Note 5 Pro. But there is a possibility Xiaomi might bring it in a later update. The speaker output is nearly identical on both.

The Redmi Note 5 Pro has three other advantages — a LED notification light, support for 5G WiFi networks, and an infrared blaster which can be employed for controlling various appliances like a television or air conditioner through your phone.

Winner: This can move either way, but if I had to choose, it would be the Redmi Note 5 Pro since I can’t imagine a life without a fingerprint sensor. 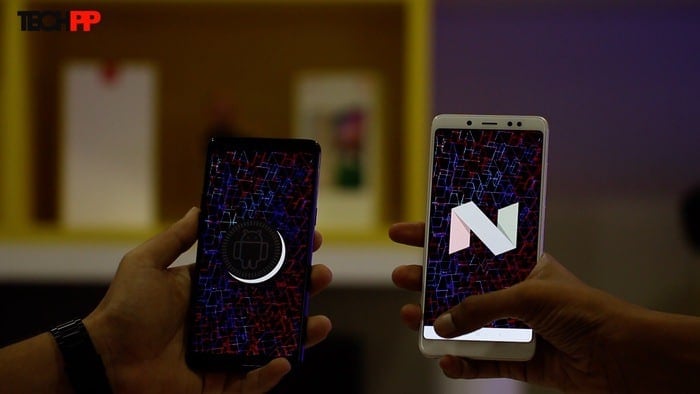 The software is a similar story among this duo as well. Both of them ship with a custom Android skin which is heavy on features and light on regular updates. The RealMe 1 comes with ColorOS 5.0 on top of Android 8.1 and the Redmi Note 5 Pro, MIUI 9.2 over Android 7.1.

Clearly, the RealMe 1 already has managed to acquire a point for having the most recent Android version but that’s where all of its point acquisition ends in this aspect. While the Redmi Note 5 Pro also has a highly customized Android software, it offers a dramatically better experience than the RealMe 1.

That’s primarily because Oppo’s desire to make its software look and function like iOS has led to a series of painfully unintuitive elements on ColorOS like dismissing a single notification is a two-step process, apps like Truecaller don’t often function properly, you cannot alter the default apps without the software freaking out, the settings menu is a mess, you cannot hide the notification content on the lock screen, and a whole lot more.

There is one bit to appreciate about ColorOS, though — navigation gestures which are responsive and well implemented. The Redmi Note 5 Pro will be receiving those in the forthcoming MIUI 9.5 update that should be available by the end of this month. 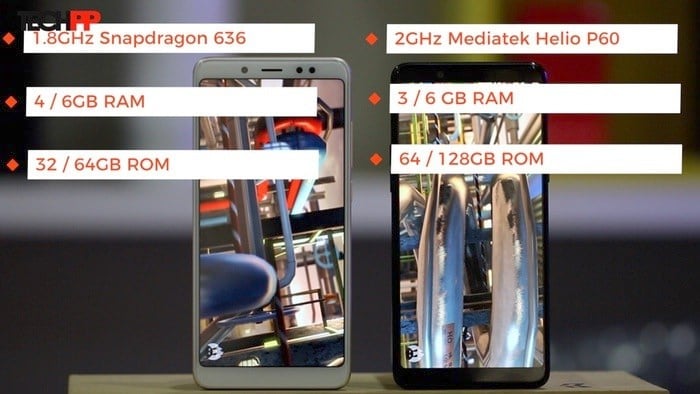 The similarities on paper extend largely to real-life usage too as both of them can handle everyday tasks without any hiccups. Pure benchmarks suggest Realme 1 to be better but the Redmi Note 5 Pro does exercise one upper hand here and that is gaming but there’s not a significant difference. 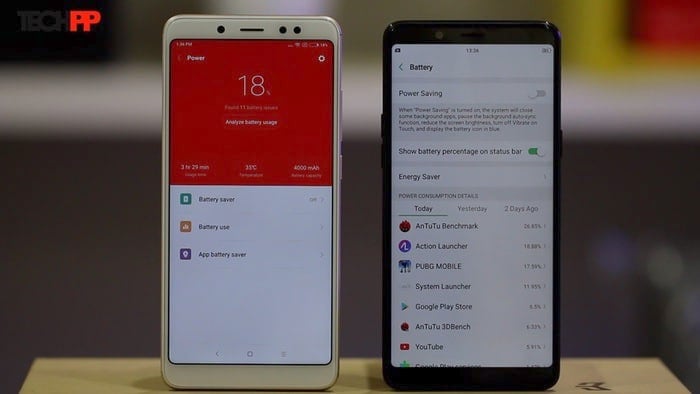 The Redmi Note 5 Pro also has a larger 4000mAh battery as compared to the RealMe 1’s 3410mAh pack. The Redmi Note 5 Pro is compatible with Qualcomm Quick Charge 2.0 but you’ll have to buy an adapter from somewhere else since it’s not bundled in the box. The RealMe 1, on the other hand, doesn’t support any sort of quick charging technology. Both of them can easily last more than a day on a single charge but on the Redmi Note 5 Pro, you will get just a couple of hours more. 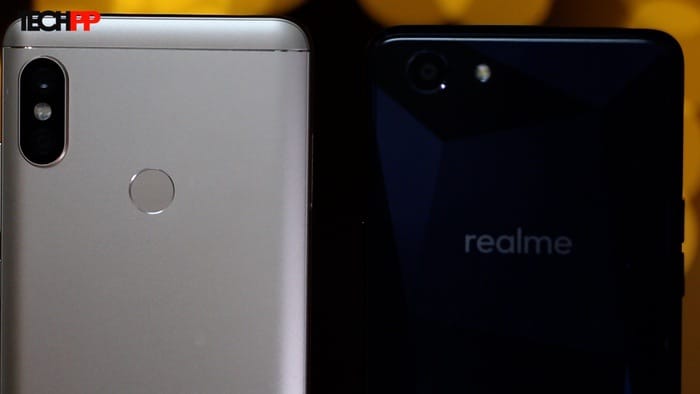 The camera is another area where the Redmi Note 5 Pro carries a superior hardware. It has two 12-megapixel sensors on the rear as opposed to the RealMe’s single 12-megapixel snapper. On the front, there’s a 20-megapixel selfie camera, while the RealMe 1 has only an 8-megapixel lens.

Numbers aside, the RealMe 1 and the Redmi Note 5 Pro don’t have any critical differences as far as the quality is concerned. Both of them are capable of producing detailed and well-balanced shots in daylight. However, the Redmi Note 5 Pro’s software is a lot more consistent than the RealMe 1. Because of that, the RealMe 1 occasionally will click something which is overly processed and undersaturated. Whenever the RealMe 1’s camera does work, it shoots equal if not better pictures.

In dimly lit scenarios as well, the Redmi Note 5 Pro is the better of the two cameras here. Images taken on it in low light are much less grainy and more usable than the RealMe 1. The Portrait Mode functions more accurately on the Redmi Note 5 Pro for both the front and rear snappers. In addition to that, it also has Electronic Image Stabilization which results in much smoother clips. Both the phones can shoot 1080p videos which are just average but on the Redmi, you also get an option for slow motion. 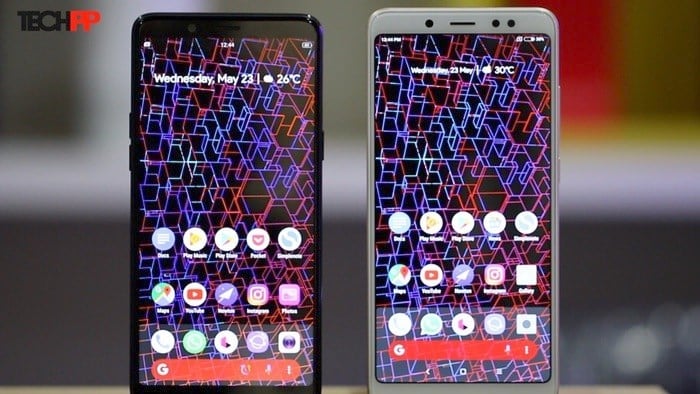 The bottom line is that the Redmi Note 5 Pro is conspicuously a more competent phone with a better set of cameras, sturdier build, longer lasting battery, much less annoying software, and most importantly, a fingerprint sensor. Unless you absolutely want a more unique design, significantly lesser cost and other RealMe 1’s perks like Dual 4G, a dedicated SD card slot and 128GB storage, I would suggest going for Xiaomi.

Was this article helpful?
YesNo
TechPP is supported by our audience. We may earn affiliate commissions from buying links on this site.
Read Next
Snapdragon 782G vs Snapdragon 778G Plus: What Has Changed?
#comparison #Face Off #Realme #realme 1 #Redmi Note 5 Pro #xiaomi