Reliance Jio’s entry into the Indian Telecom sector revolutionized the way Indians use the internet. 4G data packs which costed a bomb back in the day were reduced to paltry prices, or even free of cost for a few months, all thanks to Jio’s aggressive business model to capture the crowd. Thanks to Jio’s inexpensive data plans, other network providers started to feel the heat and had no other option other than reducing the costs of their data packs too. Off late, we’ve been seeing a ton of different offers being provided by network providers in the form of additional data, or long-term usage plans etc., thanks in large to the ongoing FIFA World Cup which a lot of users might want to stream on their smartphones. 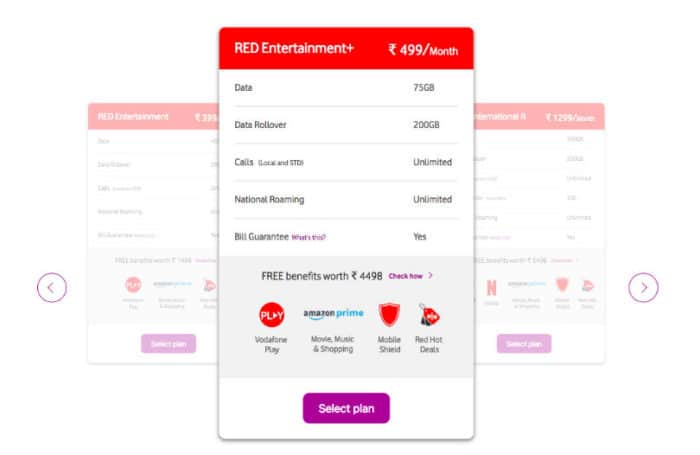 Just a few days back, Vodafone introduced two new prepaid plans offering 2 or 3GB data per day for a tenure of 3 months and they’re now offering new RED plans for postpaid customers aimed at users who consume a lot of media on their phone, hence the name RED Entertainment pack.

The RED Entertainment pack is basically the RED Basic pack worth Rs. 399 with revised benefits. The revamped plan now offers 40GB of 4G data compared to the 20GB that it used to offer earlier. The pack also offers data roll-over of up to 200GB, one-year subscription for Vodafone Play and also one-year subscription for Amazon Prime which makes it a compelling deal. Users also get unlimited local as well as national calls.

The RED Traveler R plan has also been renamed to RED Entertainment+ with the benefits now being 75GB data compared to the 40GB which was offered earlier, with the same 200GB roll-over along with unlimited local and national calls and one-year subscription for Vodafone Play as well as Amazon Prime. Users also get a device protection plan worth Rs. 300 free with this pack.

The war between telecom operators seems never ending with each provider offering new packs every single day to counter its rival. Happy days for Indian subscribers though.